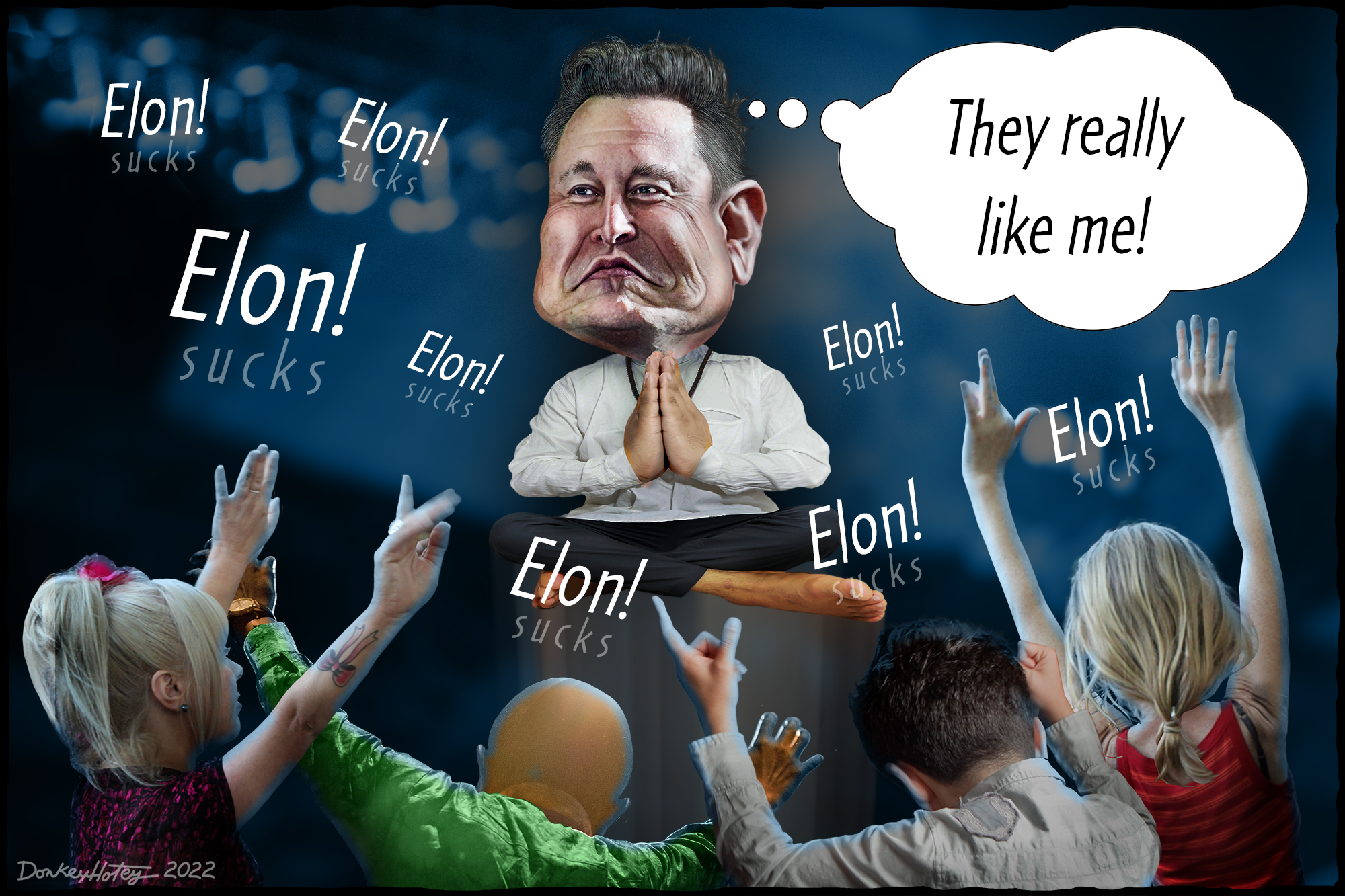 “You break it, you buy it.” This is a rule most Americans who have ever purchased anything in a store are familiar with. But when it comes to his acquisition of Twitter, Elon Musk, true to his image as a “disruptor,” has turned that rule on its head. His mantra seems to be, “You buy it, you break it.”

He certainly seems to be well on his way to screwing up the popular social media platform. And that is his right, according to the rule in America that matters above all: the rule of money.

That gives him very broad leeway when it comes to the manner in which he wants to run Twitter — including into the ground. In the end, it is going to cost him only money. However, a lot of people are going to pay a much steeper price.

While the platform may have been used as a tool to undermine democracy in the US, it had the opposite effect elsewhere. Around the world, Twitter has played a major role in helping movements from the Arab Spring to the current protests in Iran. Musk’s antics jeopardize that.

The problem is not that he seems intent on turning the platform into a personal fiefdom in which he can air his grievances and receive the obeisance of like-minded folks. The real issue is that he appears to be willing to ally himself with anybody who pays homage to him — while turning on anybody who does not.

In the future, how sure can protesters from Iran to Hong Kong be that Twitter won’t turn over their information to autocratic governments because Musk feels like it? Another problem is that Musk apparently has no qualms about turning over private communications that support whatever narrative he is peddling.

In watching Donald Trump, the entire world has recently gotten a front row seat to what happens when narcissists in desperate need of the love they didn’t get from their dads run things. It’s not good.

It is no surprise that Trump started his own social media network. People like Trump and Musk want to be able to control the narrative, and there are few better avenues available to them than running social media platforms.

Of course, controlling TV channels and newspapers may be even more effective, but fellow right-wing billionaire Rupert Murdoch has already cornered the market on brainwashing people that way. And, because he is not nearly as much of a narcissist as the other two, Murdoch has managed to fly under the radar and influence the fate of Western countries to his liking from the shadows.

But flying under the radar and operating in the shadows is not an option for people like Trump and Musk. It doesn’t seem to matter much to Murdoch that people are unhappy with him for his role in destroying democracy and the environment. But the Elon Musks and Donald Trumps of the world have a compulsion to be liked and even adored.

By the way, that makes it a little bit tricky to call them “right-wing.” Yes, their actions indicate that they are driven by conservative political ideas, but that is too simplistic. They just want to be worshiped, and there is no faster way in the US right now to attract a cult-like following than by “owning the libs.”

There is a decent chance that Trump and Musk would at least pretend to be “woke” if they could be equally worshiped by college students. For now, though, populism and nationalism are the low-hanging fruit.

However, while it is easy to point fingers at them, there is also plenty of blame to go around. Trump was enabled by a broken political system as well as by millions of disenchanted Americans who were waiting for a hero to tell them their lot in life was the fault of those who are not like them.

If Musk started to burn one $100 bill every second for the rest of his life (which comes to more than $8 million per day), he would still be a billionaire when he turns 100 in 2071.

In Musk’s case, we are only in the current situation because unfettered capitalism allows individuals to amass obscene wealth and because regulators failed to break up the big tech companies when there was a chance.

If it weren’t for the former, nobody would have the money to make a purchase of such magnitude (we recently wrote that Musk is the perfect example why there shouldn’t be billionaires). If the latter had happened, Musk would only have been able to buy a much smaller platform. In that case, with other alternatives available, users* and advertisers could go elsewhere.

*This is your periodic reminder that the “users” of social media platforms are actually the product. You “use” social media in the same way a pig marked for slaughter “uses” a convenient automatic feeding system.

Thanks to Twitter’s near monopoly, that is not going to happen. The millions who rely on it as a source of news will have to stay or be shut out from receiving information in real time. And all of the people with a massive following (i.e., those who are driving traffic to the site) are going to stick around for now because that platform has real value for them.

So, Musk is not solely to blame for wreaking havoc at Twitter. In all honesty, he is a rather pathetic figure.

Imagine being able to do just about anything you want. People don’t realize how much money the richest of the rich have these days. Let’s imagine that Musk actually started to burn his money instead of virtually lighting it on fire by sending the stock prices of his companies tumbling with his antics.

If he started to burn one $100 bill every second for the rest of his life (which comes to more than $8 million per day), he would still be a billionaire when he turns 100 in 2071.

Musk has so much money that he could fly to outer space every week, buy a bunch of tropical islands and spend a week on each of them, or purchase every NFL team and have them play in his own stadium for his personal enjoyment.

In theory, he could even use his massive wealth to do some good.

And he certainly is rich enough to not care what anybody thinks of him. Colloquially, this is also referred to as having “f%&$ you money.”

But Musk doesn’t do any of these things. Instead, he seems to spend his days hanging around on Twitter, firing people, making a flawed platform worse, and interacting with like-minded “influencers” and/or complete nutjobs because they like him.

According to the rules of capitalism, that is his right, of course. You buy it, you get to break it, no matter how important “it” may be for people striving for freedom around the world.

But we wish he weren’t so dishonest and hypocritical about it.

Musk cloaks himself as a champion of free speech but, using the flimsiest of excuses, he censors people he doesn’t like.

He conducts (extremely unscientific) polls to justify changes he clearly wants to make, e.g., bringing Trump back to Twitter and granting “amnesty” to a bunch of right-wing personalities.

When a poll doesn’t go the way he wants, such as a recent one in which he promised to relinquish his role as Twitter CEO if that were the will of the people, he moves the goalpost and then figures out how to change the rules.

Specifically, that means that the unscientific polls to reinstate Trump and other enemies of democracy were sound — but the one asking him to step aside was not.

As a result, in the future, only the people who have paid for Twitter’s “blue checkmark,” i.e., those with frail egos who are willing to pay a few bucks to be liked more, will be allowed to vote on “policy changes.”

Right now, Twitter’s Terms of Service are about 3,000 words long, at least for Americans. For Europeans, who enjoy better protections from the grubby tentacles of social media platforms, they are a bit shorter.

In reality, though, they should be much shorter.

“Going forward, Twitter is what Elon Musk wants it to be. Deal with it!” That’s just 14 words, which is a number Musk’s most adoring followers will be much more comfortable with.