Kiev, UKRAINE – On Thursday night, Secretary of State Mike Pompeo flew the 5,000 miles (via a stop in London) from Washington, DC, to Kiev to reassure the Ukrainian people.

“Of course the American people care about the people of Ukraine,” he told reporters on the plane. Pompeo became the first top US official to visit Ukraine since a whistleblower revealed that Trump sought to use US aid to browbeat the new president of Ukraine into investigating Joe Biden’s son.

But for ordinary Ukrainians, the impeachment saga has relegated their war-torn nation to barely a sideshow.

One of them, Vladislav Sobolevsky, resents the fact that in Trump’s impeachment trial, Ukraine is nothing but a passive pawn.

“Ukraine is not treated as an actor in world politics, but as an object,” the 30-year-old, who volunteered to fight pro-Russian separatists in Ukraine’s southeastern region of Donbass in 2014, told WhoWhatWhy. “This is very offensive.”

Sobolevsky and thousands of other volunteers were crucial in helping Ukraine’s poorly armed, and demoralized military counter the pro-Russia separatists, who accused the central government of “violating the rights” of Russian-speaking Ukrainians and instigating a Western-funded “coup” to oust pro-Kremlin President Viktor Yanukovych.

The war became Europe’s hottest armed conflict since the civil war in the former Yugoslavia, claiming more than 13,000 lives and displacing millions.

To Sobolevsky, who spent three and a half years in the trenches, the war is not just about protecting Ukraine but also shielding the collective West from Russia’s resurgent belligerence. Therefore, he saw the arrival of US military aid as a token of Washington’s determination to side with Ukraine. 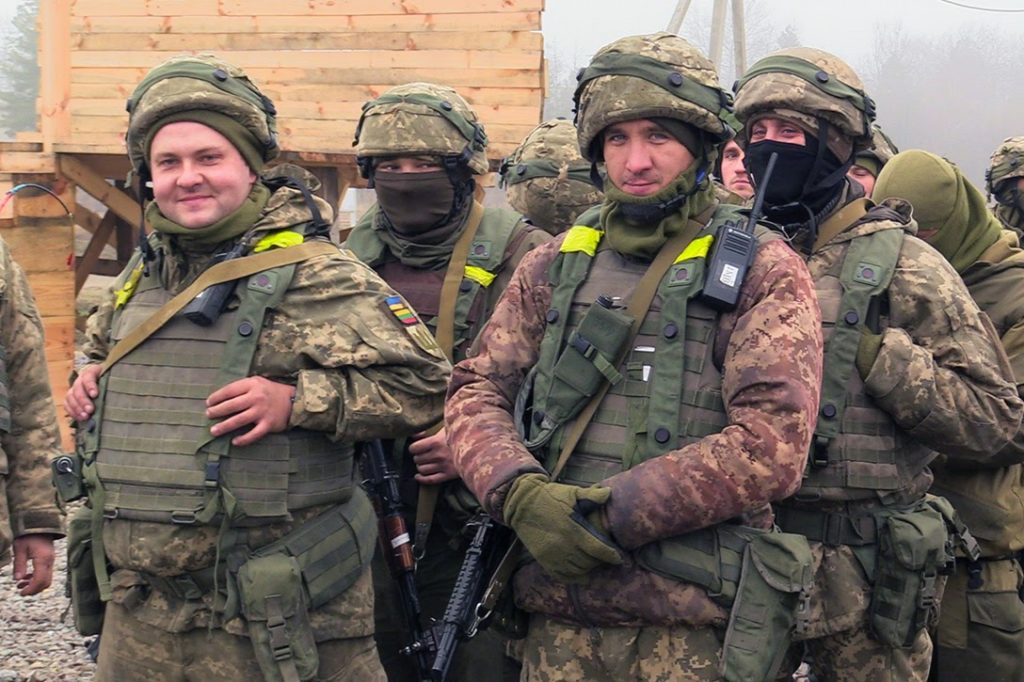 Ukrainian service personnel during a US-funded training at the Yavoriv base in western Ukraine. Photo credit: Mansur Mirovalev / WhoWhatWhy

“The people on the frontline are the frontier of the Western world, they saw this aid as something incredibly important,” said the burly head of a branch of the National Corps, a far-right nationalist party that grew out of the volunteer Azov Battalion, in the eastern city of Kharkiv, which lies only 35 miles away from the Russian border.

The US aid and arms sales included counter-artillery radars and drones, night vision goggles, first-aid kits, and uniforms. President Barack Obama’s administration did not supply lethal weapons, and only Trump allowed, in 2018, the sale of Javelin missiles that are crucial in repelling tank attacks.

So, Trump’s decision to freeze almost $400 million in aid to coerce Ukraine’s newly elected and politically inexperienced President Volodymir Zelensky to open an investigation into Hunter Biden, the former US vice president’s son, startled and angered many ordinary Ukrainians.

“Russia is America’s enemy, and we are fighting Russia. But he just does not understand it, he just wants power for himself,” Marianna Pilipenko, a rotund, retired schoolteacher who lives on a pension of less than $100 a month, told WhoWhatWhy with a grimace of disgust — before unleashing a diatribe about the foreign invaders or rulers of what is now Ukraine: Vikings, Mongols, Lithuanians, Poles, Russian czars, and Germans.

She does not know much about the intricacies of the impeachment trial, but she is bitterly confident that Trump will get off the hook — while Ukraine will suffer economically. Her son Pavlo drives a cab in Poland for 1,000 euros (1,100 dollars) a month and shares a room with two Ukrainian laborers to save money.

“He sees his [four-year-old] daughter three times a year. Do you call this life normal?” Pilipenko said.

The war has bled Ukraine’s economy dry — after severing economic ties with Russia and having to fund the fighting, the ex-Soviet republic of 43 million became one of Europe’s poorest nations. Millions of Ukrainians toil in the European Union or in Russia, and their remittances keep Ukraine’s economy afloat.

But the war helped Ukraine overcome its deep linguistic and political polarization.

After the 1991 Soviet collapse, Ukraine’s eastern and southern provinces, where the population  mostly spoke Russian, gravitated toward Moscow, while the Ukrainian-speaking rest of the country looked westward.

The polarization gave way to two revolutions. in 2004 and 2014, when massive, months-long protests ousted a pro-Russian leader and installed pro-Western governments that promised to make Ukraine part of the European Union and NATO, but got mired in squabbling and lost popular support.

Zelensky’s election was unprecedented — because most of Ukraine’s regions overwhelmingly voted for him, forgetting the divide.

The small-framed, 43-year-old actor and head of a popular comic troupe hails from a Russian-speaking Jewish family. After only four months of campaigning on an anti-establishment platform with vague, populist pledges, he trounced President Petro Poroshenko in last April’s election with 73 percent of the vote.

Then his Servant of the People party won a majority in the July parliament vote, giving him powers no other post-Soviet leader has ever had in Ukraine. The party consists of political first-timers and B-list politicians. It is named after a comic TV series in which Zelensky played a dirt-poor, divorced schoolteacher whose obscene tirades about Ukraine’s political leaders made him a YouTube sensation.

Zelensky also pledged to make Ukraine an EU and NATO member. But both blocs are far from ready to embrace a nation with a struggling economy and cancerous corruption — despite its fertile, black-earth soils whose produce could reshape Europe’s food market.

Trump’s investigation and impeachment trial are a test for Zelensky, both at home and internationally.

“Zelensky is in a tough spot. He is like a player who came out to play in the second half of the game, when his team is losing and one can’t change the rules,” said Kyiv-based analyst Aleksey Kushch.

“If Trump wins, Zelensky will find himself in one geo-strategic boat with [Russian President Vladimir] Putin. If his inactivity or isolated position contribute to the impeachment, he’ll be estranged from the Democrats, considering their sympathies” to his predecessor Poroshenko, Kushch said.

Recognition of Ukrainian Church Increases Risk of War With Russia

Some Western observers, however, think that the impeachment hearings have made the American public aware of Ukraine’s plight, and ignoring Ukraine will be politically risky for anyone in the White House.

“Whatever the outcome of impeachment, Ukraine is likely to continue to enjoy bipartisan support in Washington,” explained Diyar Autal of Harvard University’s Davis Center for Russian and Eurasian Studies.

“Thus Trump may have unwittingly done a favor to Ukraine by dragging it into a spotlight and an American political scandal. The publicity is likely to increase public support for Ukraine,” he added.

On Friday, Pompeo met with Zelensky and his foreign and defense ministers, offered an aid package of $700 million, and called Ukraine a “bulwark between freedom and authoritarianism in Eastern Europe.”

At a news conference with Zelensky, Pompeo said,“The United States sees that the Ukrainian struggle for freedom, democracy, and prosperity is a valiant one. And he added, Our commitment to support it will not waver.”

Pompeo seemed pleased with what Zelensky said in response.

“We have a new stage in our ties. I am not sure that these warming ties have somehow been affected by the US president’s impeachment.”

One response to “Trump Escapes Ukraine Saga Unscathed, Ukraine Does Not”