Will Dominion Energy, Inc., Virginia’s largest investor-owned utility, be able to use its political clout to push through its long-delayed, controversial 600-mile Atlantic Coast Pipeline (ACP)?

The pipeline, proposed in 2014, would bring natural gas from Ohio, West Virginia, and Pennsylvania to Virginia and North Carolina. To get it there, the pipeline would have to cross West Virginia, Virginia, and North Carolina, bringing construction crews into the George Washington and Monongahela National Forests, and crossing the Appalachian Trail. The project also would place a massive compressor near an African American community founded by freed slaves, threatening the area with both noise and air pollution

Environmental and civil rights groups, small businesses, and many homeowners in its path all oppose the project, charging that the pipeline is not needed and would jeopardize environmentally sensitive lands, fell hundreds of trees, and harm water quality.

Initially, Dominion was able to secure permits from federal, state, and county regulators. Last year, however, environmental lawyers won key victories in federal court that have prevented the  pipeline from moving forward.

But late last month, Dominion scored a victory of sorts. The Trump White House stepped into the fray; its solicitor general joined the corporation in a request that the Supreme Court hear Dominion’s appeal of a federal court’s decision blocking the ACP from crossing the Appalachian Trail. Dominion lobbyists also are prowling the halls of Congress, environmental advocates charge, urging lawmakers to pass a law that would allow the project despite the court rulings. 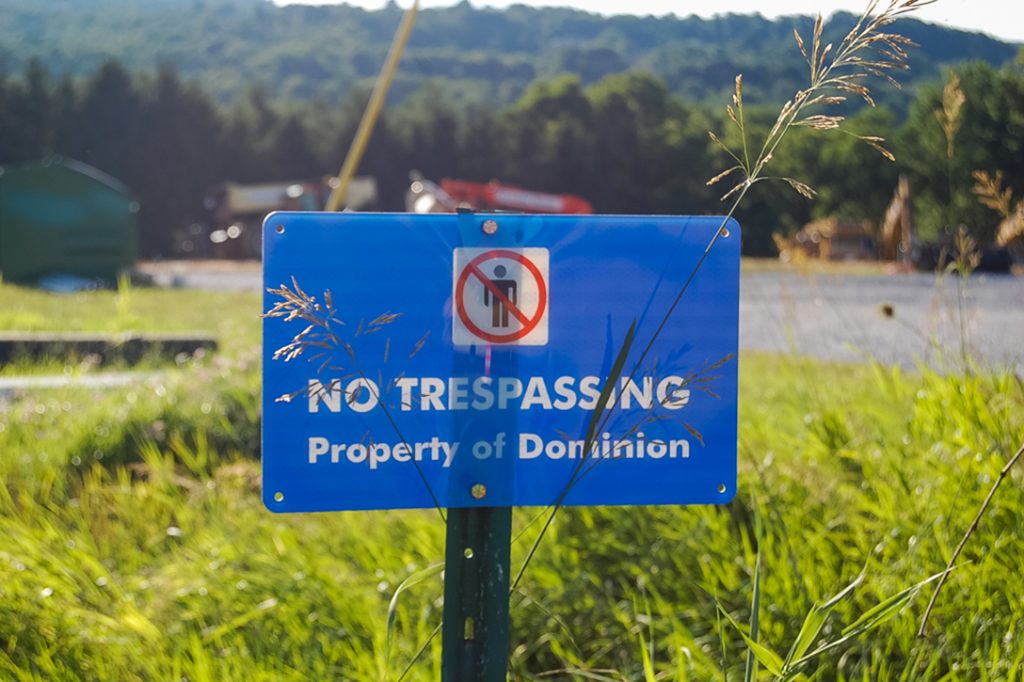 What’s at stake concerns far more people than the Virginians in its path “seeing the mud in the river and the cleared trees on the mountainside” behind their homes, Lee Francis told WhoWhatWhy.

Francis, deputy director of the Virginia League of Conservation Voters, said that the ballooning cost of the project, now at $7.5 billion, will affect millions of ratepayers in Northern Virginia, Richmond, and “every large population center” in the state. Dominion is an electric monopoly, Francis said, and the financial risk will be “borne by anyone who pays a Dominion electricity bill every month.”

The project also goes against larger efforts to combat climate change, he added. “Methane is one of the most potent greenhouse gases … 10 times more potent than carbon dioxide in terms of what it does in the atmosphere. And you have leakage from where [natural gas is] fracked, and throughout the distribution system,” as well as “emissions from the end users, which are the power plants.”

Lawyers who have beaten Dominion in US district court  will be appealing the request for a Supreme Court hearing, said DJ Gerken, senior attorney for the Southern Environmental Law Center. The court likely will decide in October whether to hear the case.

But Gerken doubts the Supreme Court will hear the appeal. “The court takes up cases that deal with issues of national importance or conflicting legal decisions from across the appellate courts of the country. There’s really neither of those [factors] here.”

A greater danger, Francis said, is Dominion’s strategy to get a provision or amendment approving the pipeline “squeezed into the language” of a must-pass bill. The corporation tried to get a rider attached to a budget bill last year, but with no success, Francis said.

Political contributions are part of Dominion’s clout. A report released last month found that the investments of just six Virginia lawmakers in Dominion and Duke Energy total at least $360,000. The two companies own 48 percent and 47 percent of the project, respectively.

In addition, these lawmakers have received campaign contributions from Dominion, one of the state’s largest corporations and a reliable political donor. The six lawmakers also are enthusiastic supporters of the ACP, a project which stands to benefit them directly.

Nothing the legislators have done violates the law, study author Derek Seidman said. But, he added, these relationships can be problematic. The legislators are shareholders of Dominion, at a time when the corporation is pushing “an intensely controversial fossil-fuel infrastructure project.”

Such conflicts, Seidman said, raise “questions of trust in Virginia.”

Dominion also is a donor to US senators and representatives, and has given close to $200,000 to Gov. Ralph Northam over the course of his political career. Northam has received far greater contributions from environmental groups.

Nevertheless, just before a crucial vote on the ACP last December, his administration dropped two members of the State Air Pollution Control Board who had raised concerns about “the environmental justice implications” of locating a massive compressor station, with its dangers of air and sound pollution, “in a majority black community and a community founded by freed slaves,” Francis said. The board ended up approving Dominion’s permit. “The outcome was really disappointing.” Why the Northam administration took this step “remains a mystery to us,” he said.

But political contributions are only part of Dominion’s clout, Francis said. “It’s more than just the check that they cut to lawmakers. It’s more insidious. Event sponsorships, and festivals and charitable giving and donations to different causes,” are part of it.

Even more important, he said, “Dominion is in the room when it comes to economic development deals in Virginia.” When Amazon decided to locate its second headquarters in Arlington, VA, he said, “they damn sure had a conversation with Dominion Energy about how they’re going to get their electricity.”

Dominion did not respond to a request for comment on this story.

At least in public, Dominion seems far more sanguine about its prospects in the nation’s highest court. On an earnings call with financial analysts March 31, Dominion CEO Thomas Farrell claimed that the Solicitor General’s involvement would greatly enhance the corporation’s chances for having its case heard. He acknowledged that the attempt to build the pipeline has been “a very frustrating process.”

Farrell declined to discuss other options, including rerouting the pipeline.

Gerken said that the federal courts didn’t absolutely bar Dominion from moving forward. The Fourth District’s three-judge appellate panel invalidated a permit from the US Forest Service to build the pipeline in the George Washington and Monongahela National Forests and to cross the Appalachian National Scenic Trail.

Dominion had said there were alternate routes, but never seriously considered them, Gerken charged. “I’m not endorsing that option,” he quickly added. “What they need to do is abandon this pipeline because it has never been necessary. This is a profit-maker. It is not needed to deliver gas to keep our power on in the South. That’s been demonstrated repeatedly.”

Gerken remains confident that the pipeline battle is one environmentalists can win. “So far, we have been enforcing laws that Congress passed because Americans love their forests and love their national parks. Our political representatives know that,” he said. “So no, I’m not worried. I don’t think any elected representative wants to be on record choosing Dominion’s profits over our national parks or our national forests.”

One response to “Will Corporate ‘Clout’ Kickstart Atlantic Coast Pipeline?”