An ineffective $8 billion counternarcotics effort, $500 million worth of cargo planes that had to be turned into scrap metal and a $30 million program to grow crops that nobody wants — those are just some of the examples of how US funds have been wasted in Afghanistan.

While taxpayers have every right to be upset about how their money has been squandered, they might feel even more strongly about the lack of consequences for those who spend it so unwisely.

The special inspector general says his team is doing all it can in a difficult environment. Its criminal investigators have recovered nearly $1 billion in fines and restitution. Although dozens of people have been indicted when crimes were committed, Sopko noted that most of the problems he and his team encounter are not related to theft.

“It isn’t criminality,” he said “It’s just waste and abuse.”

And in those cases, despite the vast sums involved, not much is happening with regard to personal responsibility.

More Expensive Than the Marshall Plan

The sheer size of the undertaking magnifies the problems. At currently about $110 billion, more US taxpayer funds have now been appropriated for Afghanistan’s reconstruction than for rebuilding all of Europe after World War II — even after taking inflation into account.

And the entire program is run without any attention to what in the private sector would be called the bottom line.

“I can’t find anybody … who can tell me … what the costs are and what are the benefits from doing something,” Sopko said. “The problem in the government is that the bottom line is the appropriations. Did we meet the appropriations, did we spend all the money? And that is the unfortunate approach to government as a whole.”

He also describes the current personnel system as “very poor.”

“We can’t hire the right people, we rotate them in and out of Afghanistan too quickly, we reward them for basically spending the money and not for actually accomplishing anything,” Sopko noted. 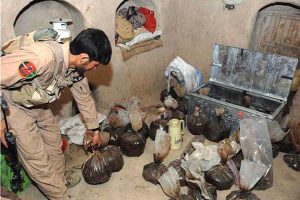 Counternarcotics Effort Is the Biggest Waste

The biggest waste of all, according to the special inspector general, has been the $8 billion spent on counternarcotics, which “hasn’t really accomplished much of anything.”

“And again,” Sopko pointed out, “nobody has been held accountable and nobody has lost their job.”

Another “horror story of waste and fraud and abuse,” as the special inspector general described it, was the purchase of about 20 cargo planes for the Afghan air force that cost approximately $500 million.

“They were the wrong planes for Afghanistan, for the terrain and the weather and altitude,” Sopko explained. “We were basically told by pilots who flew the planes over [to Afghanistan] that they were death traps. They were poorly maintained, poorly rehabbed and basically they didn’t fly.”

“It even cost us money to scrap them,” Sopko said, adding that some of the wastes of money would be “primetime comedy except for the fact that it’s the taxpayer’s dollar and the fact that there are people’s lives at stake.”

Still, he is hopeful that the new unity government in Afghanistan, which is “really taking fraud, waste and abuse seriously,” and the new US ambassador can help turn things around.

“I would not have said that I’m optimistic a year ago,” Sopko said. “The current regime really understands the problem and is trying to address it.”

The special inspector general said he was told by the United States Agency for International Development (USAID) people that he shouldn’t reveal some of the problems he and his staff have uncovered because the Afghans would get upset. This is a notion he rejects.

It’s All About Security

In the end, as with most things in Afghanistan, it is all about security. And that is why more than half of the appropriated money, about $60 billion, has been spent on improving the Afghan military and police force. If the Afghans can’t secure their own country, all that has been gained can quickly be lost.

“If the security situation were a lot better, then I would feel more comfortable about the potential success and, more importantly, the sustainability of all of the other programs — the schools, the clinics, the roads, the airports, all of the other stuff,” Sopko said.

“The big threat is if the Afghan government and the military loses control, the Taliban are going to come in like a whirlwind and punish the poor Afghan civil servants, the teachers, the women, the girls, who have been trying to change the reality in Afghanistan,” he added. “That is what is concerning me most. If we can’t sustain the gains we have made, then it’s the dirtiest trick we have played on the Afghans.”

Even though a lot of money has been wasted, things would be far worse if it weren’t for contractors and whistleblowers.

“The contractors come in and say: ‘You can’t believe what they are asking us to do. This is crazy but we gotta abide by the contract’,” Sopko said, adding that the majority of contractors “have been extremely responsible in responding to our request for information and then voluntarily coming forward with information.”

As for whistleblowers, Sopko is even more complimentary and the situation would be dire without them.

Please see these additional stories on the spectacular waste of taxpayer’s money in Afghanistan:

Who Wants to be a Millionaire — Afghanistan Reconstruction Edition

Jailbreak: the 11 Million the US Paid for an Afghan Prison with no Fence

Note: The full WhoWhatWhy interview with John Sopko will be available tomorrow as a podcast.