It’s been 20 years since the Oklahoma City bombing. What was the real extent of the government’s involvement? Attribution: Ken Lund / Flickr

Two decades have passed since the April 19, 1995, Oklahoma City bombing. It was the deadliest act of domestic terrorism in American history, and 168 people died, including 19 children.

The attack on the Murrah Federal Building was said to be the work of Timothy McVeigh and two confederates, described as right-wing extremists with an anti-government agenda. McVeigh was executed by lethal injection and Terry Nichols and Michael Fortier were given prison sentences.

Now, however, major cracks have appeared in the federal government’s story—a story long considered by some victims’ families to be little more than a stonewall of mendacity and distortion. New revelations suggest that the government may be covering up prior interactions between intelligence services and the accused. In this way, Oklahoma City poses some of the same questions raised by 9/11 and the Boston Marathon Bombing—other national security traumas where Washington has worked hard to block potentially devastating disclosures.

Probably the most significant new development is multiple confirmations of past allegations that a German intelligence operative with ties to one or more US agencies, Andreas Strassmeir, aka “Andy the German,” had a close and extensive relationship with McVeigh.

Based on 19 years of active investigation by this reporter—including hundreds of interviews, over two score field trips, and unique access to critical documents—information presented herein leads to a hugely important finding: the FBI was aware of the Strassmeir–McVeigh relationship and was monitoring McVeigh’s activities at a never-before-revealed level approaching “close surveillance.”

Contrary to Strassmeir’s long-standing claim, endorsed by the Department of Justice, that he and McVeigh had a single, brief, inconsequential meeting at a Tulsa, Oklahoma, gun show two years before the bombing, several credible sources assert the relationship was far more substantive.

If correct, that could fundamentally alter Americans’ understanding of the way their government goes about protecting American lives—or, in the case of Oklahoma City, failing to… with tragic results. 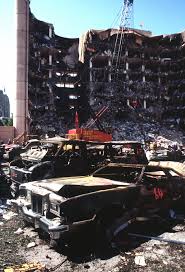 The Murrah Federal Building two days after the bombing.

“Andy the German”: an informant for certain, maybe a provocateur

A very senior retired CIA official, speaking on background to me in 2006, said he had read an in-house study examining whether the Agency had any “exposure” in OKBOMB (the FBI Major Case name for the bombing investigation).

While the study cleared the US spy agency, it identified a German intelligence operative as being involved. This individual was Andreas Strassmeir. According to my source, although the CIA report stated that Strassmeir worked for the German government, it also said that the intelligence he was collecting on McVeigh had been shared with the FBI.

Strassmeir came to the United States and became active in right wing and neo-Nazi circles, ultimately becoming security director of Elohim City, an extremist “Christian Identity” enclave in eastern Oklahoma. Run by the “Reverend” Robert Millar, a cunning manipulator who also served as a Cooperating Source for the FBI—think “Whitey Bulger of the Ozarks”—Elohim City was a major way-station for neo-Nazi and other white supremacists who in 1983 declared war on what they termed the Zionist Occupation Government (ZOG). Strassmeir began living there in August 1991.

But he did not fit the profile of an angry social misfit living in the pinewoods. His father had been a high-level apparatchik in the German national government, and his brother was a Berlin city councilman. Strassmeir himself had served in positions of authority in the German Army.

In March 1997, as McVeigh’s trial was unfolding in Denver federal district court, the Department of Justice provided his defense team with a large dump of discovery materials. These included reports from interviews by FBI agent Robert Blecksmith with officials in seven “federal government law enforcement and intelligence agencies to determine if ANDREAS CARL STRASSMEIR was ever a cooperating witness or confidential source.”

The subject of these interviews was raised by McVeigh’s principal defense attorney, Stephen Jones. He wanted to know if Strassmeir ever had any kind of relationship with any federal agency.

Six entities—Customs, Defense Intelligence Agency, Internal Revenue Service, National Security Agency, Secret Service, Drug Enforcement Agency and the U.S. Marshals Service—responded that they had found no relevant records. (Interestingly, no request was made of the Bureau of Alcohol, Tobacco and Firearms (ATF), which would have had an interest in weapons activities at Elohim City.)

But the response of the CIA’s Office of General Counsel was quite different. Attorney Linda Cipriani revealed only that she had provided to DOJ attorney Beth Wilkinson “the results [of a records search] to determine if Strassmeir, white male date of birth 5/17/59, had ever worked for or been affiliated with her agency.” But that did not answer Agent Blecksmith’s question.

Note that Cipriani did not declare unambiguously, as did six other federal law enforcement and intelligence agencies, that there was “no record or information indicating that Strassmeir” had any relationship with those agencies.

Understandably, McVeigh’s attorney was eager to learn exactly what had turned up in that CIA records search on Strassmeir. But that information was never disclosed. Jones requested that the presiding judge, Richard Matsch, order DOJ to share the information presented it by the CIA, but Matsch refused to do so.

So, were McVeigh, Nichols and Fortier disgruntled domestic terrorists operating on their own? Apparently not, according to one long-time FBI Confidential Informant (CI).

Shortly after the April 19, 1995, bombing, John Matthews, a CI targeting right wing and neo-Nazi groups (but expressly forbidden to target OKBOMB-related information), reported to his FBI handler information relevant to McVeigh. Matthews recounted how, a few years before the Oklahoma City attack, he had attended a weekend training session in Austin, Texas, for a suspect paramilitary group. While at this meeting, Matthews met two ex-soldiers, introduced as “Tim” and “Andy.”

In the post-bombing media deluge, Matthews realized that “Tim” was Timothy McVeigh, When Matthews related his information about “Tim” and “Andy the German” to Don Jarrett of Phoenix, his FBI handler, Jarrett responded, “We know, John. Don’t worry about it. We got it covered.”

Newsweek confirmed this statement, and others, by Matthews in preparing its November 28, 2011, cover story on white supremacists.

Further corroboration of extensive interactions between McVeigh and Strassmeir come from Bill Buford, the retired former head of the Little Rock ATF office. Buford said on the record that he knew of both verbal and written reports putting McVeigh at Elohim City. He also stated that while none of this material was provided to the defense teams in discovery, it was included in an FBI summary report sent to DOJ.

Additionally, FBI Agent James Carlile, has said on the record: “…McVeigh had been in there [Elohim City] and probably tried to recruit somebody… ”

Strassmeir has always been the enigmatic key to understanding the Oklahoma City bombing. His crucial role began to be documented in August 1994, when the Tulsa, Oklahoma, ATF office recruited as a paid Confidential Informant a Tulsa debutante who had become involved in white supremacist activities after surviving a near-assault by several African-American males. Designated CI-183, Carol Howe gained ready access to Elohim City, visiting almost weekly and staying on occasion for several weeks until a short time before the bombing. Howe got to know Strassmeir well.

Less than a half year before the Oklahoma City bombings, Tulsa ATF issued a remarkable report. In its November 1994 monthly Report of Investigation (ROI) on Howe’s activities—sent both to the regional ATF office in Dallas and directly to ATF headquarters in Washington (signifying a very high-profile case)—it described Strassmeir as follows:

He was born in 1959 and served in the West German military starting in 1979. He was an infantry officer. His plans are to forcibly act to destroy the US Government with direct actions and operations such as assassinations, bombing and mass shootings. He believes the biggest enemy to be the United States Government (ZOG).

The Oklahoma City bombing story is significant on many levels. One important aspect is what it shows about the welter of agencies that are as often investigating and arresting each other’s shadowy operatives as they are cooperating. Nowhere is this more apparent than in regard to Elohim City, where several of the key “extremists” may well have been government agents unwittingly egging one another on.

This kind of compartmentalization, while perhaps understandable in intelligence operations, nonetheless can lead to tragedy. That may be what happened in the case of Oklahoma City, when ATF’s efforts to nab the German were thwarted by other entities.

Here’s what happened, as reconstructed from documents and interviews.

Within two weeks of ATF’s report on Strassmeir, David Roberts, Resident Agent in Charge (RAC) of the Tulsa ATF, set in motion plans to raid Elohim City and arrest the German. He would, it was assumed, be held as a “criminal alien” (having an expired visa) in possession of firearms. Strassmeir’s illegal possession of firearms—(a felony under 18 US Code 992(g)—triggered ATF jurisdiction.

Contemporaneous records of the Immigration and Naturalization Service (INS) show that in early December 1994, Tulsa ATF requested a “certificate of non-existence of lawful permanent residence” from INS headquarters in Washington. A January 5, 1995, INS record stated that Tulsa ATF “request [INS] participation in Raid – next month.”  (Prior to the reorganization leading to establishment of the Department of Homeland Security, INS was a part of Department of Justice, and ATF was an agency of the Department of Treasury.)

On February 16, 1995, ATF headquarters formally certified that no paperwork existed to back up Strassmeir’s  “lawful admission to the United States as an immigrant.” He was now fair game for arrest in a joint ATF/INS raid.

While INS’s wheels were slowly grinding in Washington, Tulsa ATF accelerated pre-raid preparations. On February 7, its agents conducted an aerial reconnaissance of Elohim City, using an Oklahoma State Highway Patrol aircraft and pilot. The ATF Report of Investigation (ROI) for February stated, “Both photographs and video were taken.”

(ATF Tulsa records during this time begin to show an increasing concern to withhold what was seen as very sensitive information. But, the bane of any such effort—too much paper, too widely distributed—does allow for a relatively complete picture of these crucial days and events.)

Now that INS had certified Strassmeir as an illegal alien, Tulsa ATF requested that Oklahoma Highway Patrol issue a “BOLO” (Be On the Look Out”) for “Strassmeir. Titled, “BOLO for Security Chief at Elohim City Compound,” and naming “Andreas Strassmeir” as the target, it stated:

—Came to USA in 5/91, passport was good until 8/91. He never left the country. INS says he does not have an extension on his VISA.

—Carries a .45 auto pistol at all times.

—He is an illegal alien, ATF wants to be notified if he is stopped and has the gun on him. They will file the charges.

These plans were brought to a sudden halt. To find out why—and what happened next—please see Part II of this piece.