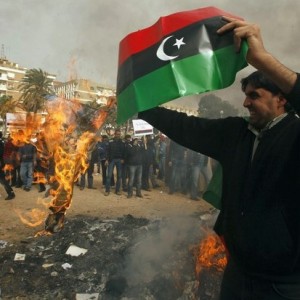 NEWSFLASH: The U.S. has evacuated its embassy in Tripoli, Libya, because of ongoing violence, U.S. officials tell CNN’s Barbara Starr.

Have you been following events in Libya closely? No, of course you haven’t. Since the ouster of Muammar Qaddafi, we’ve scarcely discussed Libya except in the context of a predictable partisan effort to affix blame for a single if tragic event: the deaths of the American ambassador and several others in Benghazi nearly two years ago.

Since then, the country the West purportedly rescued has slid into chaos with barely any consequences for those in Washington, Paris, London and elsewhere who supported the removal of Qaddafi.

Sadly, the public was duped once again. Those advocating military intervention against the Libyan leader were not competent to predict a successful outcome or an outpouring of love from the Libyan people any more than Dick Cheney was to promise that the people would welcome American troops in Iraq with bouquets.

Just as bad, no acknowledgment has ever come from the establishment, including the media, that what was tantamount to an invasion by the West in 2011 was never about protecting the Libyan people from an ogre. That’s what the public was constantly led to believe. Rather, it was about protecting opportunities for Western companies. And now, as Libya continues to unravel, even those are in doubt.

At WhoWhatWhy, we investigated what was happening in Libya from the beginning. We believe good public policy and good journalism require constantly reviewing where we’ve been to understand where we are, and where we’re going.

If you’d like to understand the true motives that were (and are) in play, here are some of the articles we ran:

Libya: Connect the Dots—You Get a Giant Dollar Sign

Benghazi: Cover-up by Both Parties?

The CIA’s Man in Libya?

Did Qaddafi Really Order Mass Rapes? Or Is the West Falling Victim to a Viagra-Strength Scam?

Kerry and McCain United Behind the Mysteriously Urgent Libya Mission

Quick, Quick: Why Are We in Libya? A New Candor Prevails, Sort of …

Burying the “Lockerbie Bomber”—and the Truth

5 responses to “Here’s Why Libya Is Burning—Again”