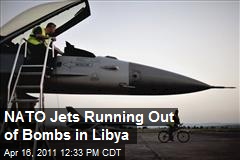 I’m one of the latter, which is why I ponder each article as if it is in the crossword section. And why I feel compelled to offer you a markup of the following, which appeared under the headline “British Commander Says Libya Fight Must Expand:

Two months into the NATO bombing campaign against Col. Muammar el-Qaddafi’s forces, Britain’s top military commander has said that the Libyan leader could remain “clinging to power” unless NATO broadened its bombing targets to include the country’s infrastructure.

Hm. So this British guy, whoever he is, wants to bomb Libya to smithereens as a way of forcing Qaddafi out. And I could swear they were originally in there for some other reason—and very reticent about the extent of any military involvement.

The comments, by Gen. Sir David Richards, came at the end of a week that saw NATO step up its airstrikes, with an accelerated tempo of attacks on the capital, Tripoli. In the predawn hours of Thursday, a volley of heavy bunker-busting bombs that struck Colonel Qaddafi’s underground command headquarters in the city appeared to have narrowly missed killing him.

Colonel Qaddafi’s defiant audio message after that attack, telling NATO he was “in a place where you can’t get me,” appears to have played a part in galvanizing opinion among NATO commanders, particularly in Britain and France, the nations carrying out the bulk of the bombing.

Don’t piss these guys off, or they’ll come for you just on a dare.

Britain, in particular, with heavy combat commitments in Afghanistan and mounting costs for the Libyan air campaign straining its military budget, has been concerned that the conflict could be settling into a long-running stalemate.

What was Britain’s particular reason for focusing on Qaddafi, as opposed to any other run-of-the-mill murderous thug in these general parts? I couldn’t remember, so I poked around, and came up with this piece we ran previously.  It points out (courtesy of a little-noticed New York Times mention) how Qaddafi had angered big oil companies by demanding a bigger piece of the action from those extracting oil from his premises. Big petrol, of course, includes  BP—the outfit that has British government officials by their privates:

Ok, back to the new Times piece…

Under the United Nations Security Council resolution approving the Libyan air campaign, NATO was empowered to use “all necessary means” to protect the country’s civilian population from attack by pro-Qaddafi forces, which hold Tripoli and much of western Libya, while rebel forces control much of the country’s eastern region. That mandate has been stretchedbeyond attacks on tanks, artillery and other units engaged in front-line combat to a wide range of targets in Tripoli and elsewhere that have been identified by NATO as “command-and-control” centers, including Colonel Qaddafi’s Tripoli bunker.

Whoops! For a second I thought the Times was going to come out and just say it: “That mandate has been stretched beyond recognition to something entirely different—a war to take Qaddafi out altogether. In other words, an invasion, kind of like what Iraq turned out to be.

But the Times doesn’t quite say it, so you’re not quite getting this small but somehow consequential point: what was first presented as “protecting” the civilian population from attack has now segued to attacking—and forcing the leader to flee, or better, killing him.

Of course, all this puts Qaddafi in a truly untenable position, in which he is forced to try even more harsh measures against his uncooperative population, which in turn gives NATO more reasons to express outrage and up the ante.

But with the war now at the end of its third month and the two sides skirmishing in battle zones spread across hundreds of miles, there has been growing concern in NATO capitals that the strategy needs a game-changing adjustment that might bring a rebel victory closer.

But…darn…just…can’t….quite say it. Too…disconcerting…gonna…really…depress…our readers. Might lose faith in what we keep telling everybody is a pretty righteous American foreign policy.

NATO officials have made no secret of their belief that this would most likely come with attacks that weaken Colonel Qaddafi’s hold on Tripoli, ideally attacks that spread a sense of despondency among Qaddafi forces and lend an impetus to a rebel underground that has roots in some quarters of the city.

General Richards, chief of the defense staff in Britain, spoke in an interview at NATO’s southern headquarters in Naples, Italy, which has served as a command center for the attacks. “The vise is closing on Qaddafi, but we need to increase the pressure further through more intense military action,” he said in the interview, published in The Sunday Telegraph. “We now have to tighten the vise to demonstrate to Qaddafi that the game is up.”

Why haven’t we heard more about this Richards chap? Another Field Marshal Montgomery.

He added that the bombing campaign, which has involved more than 2,500 sorties since it began March 19, had been “a significant success.” But he added: “We need to do more. If we do not up the ante now there is a risk that the conflict could result in Qaddafi clinging to power.”

Oh, ok. So that is what it was all about. And 2,500 “sorties”—nice term, that—unless you’re a civilian being sortied about. Two thousand five hundred bombing runs is a lot.  (For more on genteel terms, see how “granular” works well in Afghanistan, here.)

The general suggested NATO should be freed from restraints that have precluded attacking infrastructure targets; other NATO officials have suggested in recent weeks that these could include elements of the electrical power grid in government-held areas, and fuel dumps. And he defended attacks seemingly aimed at Colonel Qaddafi himself, saying that “if he was in a command-and-control center that was hit by NATO and he was killed, that would be within the rules.”

Amazing. A really direct guy. Admits that he wants to kill Qaddafi, that he really isn’t allowed to under the original marching orders, but that there’s a way to achieve this “within the rules.”

A tally of NATO attacks given by alliance spokesmen in Brussels gave a measure of how the bombing had already been intensified, with a strong focus on Tripoli. NATO said that alliance aircraft struck 39 “key targets” in and around the capital in the first four days of last week, including the strike Thursday on Qaddafi headquarters in south-central Tripoli. The Tripoli targets, NATO said, included seven “command-and-control” centers, compared with only three similar strikes in the 10 days before then.

But the increased tempo of the attacks has shown little sign, so far, of seriously destabilizing Colonel Qaddafi’s rule. For weeks, there has been a heavily dispirited atmosphere in Tripoli, with many ordinary Libyans eager to pull Western reporters aside to say they yearned for Colonel Qaddafi to be ousted. NATO bombing attacks have often been followed by outbreaks of automatic fire in neighborhoods in central Tripoli, apparently started by hit-and-run attacks by elements of the anti-Qaddafi underground.

General Richards’s call for a widening of the bombing targets prompted a dismissive reaction from the Qaddafi government. Khalid Kaim, a deputy foreign minister, said the airstrikes had been aimed at infrastructure from the start, and he cited a string of attacks on what he described as civilian targets in several cities. As for attempts to kill Colonel Qaddafi, he said that NATO had conducted four airstrikes aimed at Libya’s leader, the latest on Thursday. Further attempts to kill him, he said, would be “a waste of time.”

Again, Mr. Kaim, this kind of taunt is just not helpful. You are definitely the runts on this playground.

This could all have been so, so much easier. All you had to do was play ball. And never mind those civilians.

6 responses to “Quick, Quick: Why Are We in Libya? A New Candor Prevails…Sort Of”