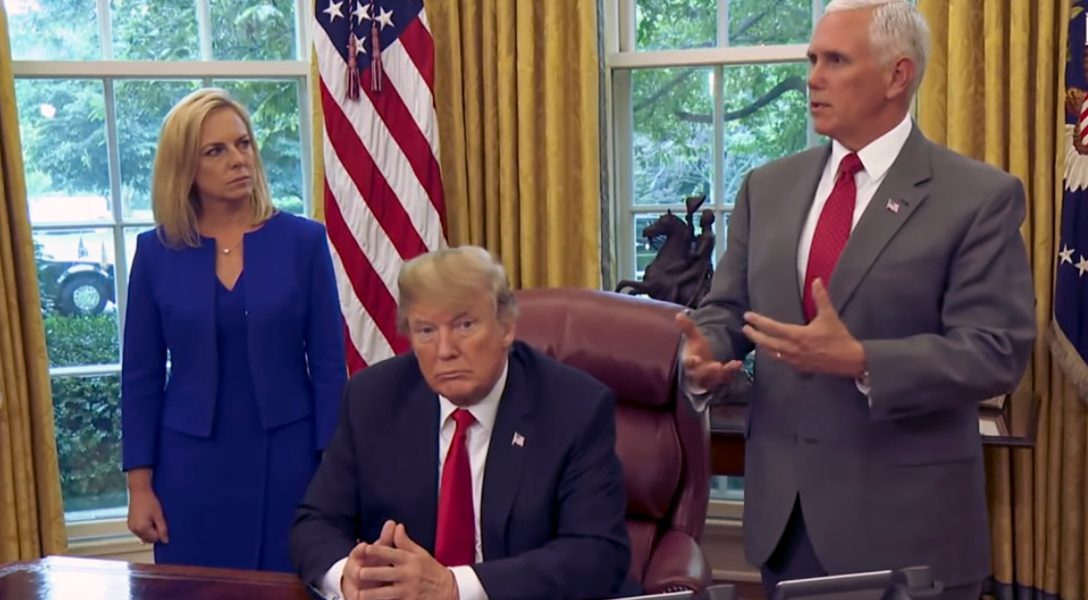 Caving to sustained uproar from activists and politicians worldwide, President Donald Trump signed an executive order Wednesday to end the separation of children and parents who illegally traverse the US-Mexico border. Far from an act of mercy, though, this corrective mainly serves to keep intact a morally indefensible policy.

It is, in fact, the first time Trump has backtracked on an incendiary, legally-contested measure to combat illegal immigration, one of the signature issues of his 2016 presidential campaign. Buoyed by GOP hardliners, he made significant strides on the immigration front in his first year in office, passing a travel ban targeting people from Muslim-majority countries and repealing the Deferred Action for Childhood Arrivals program (DACA), which shielded from deportation a million undocumented minors.

Then in April, Attorney General Jeff Sessions rolled out a “zero-tolerance” policy toward unauthorized border-crossings. Under the policy, border patrol agents will criminally prosecute every adult who illegally walks into the US from Mexico.

However, a 1997 court order, called the Flores agreement, forbids immigration officials from holding minors for longer than 20 days. This limitation ripped families apart: Parents must remain in detention as long as their cases are deliberated, but Immigration and Customs Enforcement (ICE) agents are obligated to immediately release children to the care of relatives or a licensed program. (The Justice Department is seeking to change the law so that ICE can gain indefinite custody of alien families.)

While detained parents awaited criminal proceedings in jail, children were placed in Border Patrol facilities or foster homes. Photos of children kept in cages went viral last weekend, fueling a wave of public backlash that pressured Trump to release the executive order, which requires families to be detained together. Assigned to the same facilities and under more humane conditions, children can be spared the pain and trauma of separation.

But the order does not reverse the initial policy, and the administration made clear that it will continue to detain unauthorized border-crossers. It also fails to address whether, or how, the 2,300 minors already affected by the policy will be reunited with their parents. If implemented, the new rules pose daunting financial challenges, as substantially more infrastructure will be needed to facilitate long-term detention of entire families.

“This executive order would replace one crisis for another,” said Anthony Romero, the executive director of the American Civil Liberties Union. “Children don’t belong in jail at all, even with their parents, under any set of circumstances.”

Watch the videos below for a closer look at the traumatic conditions detained children endured without their parents.