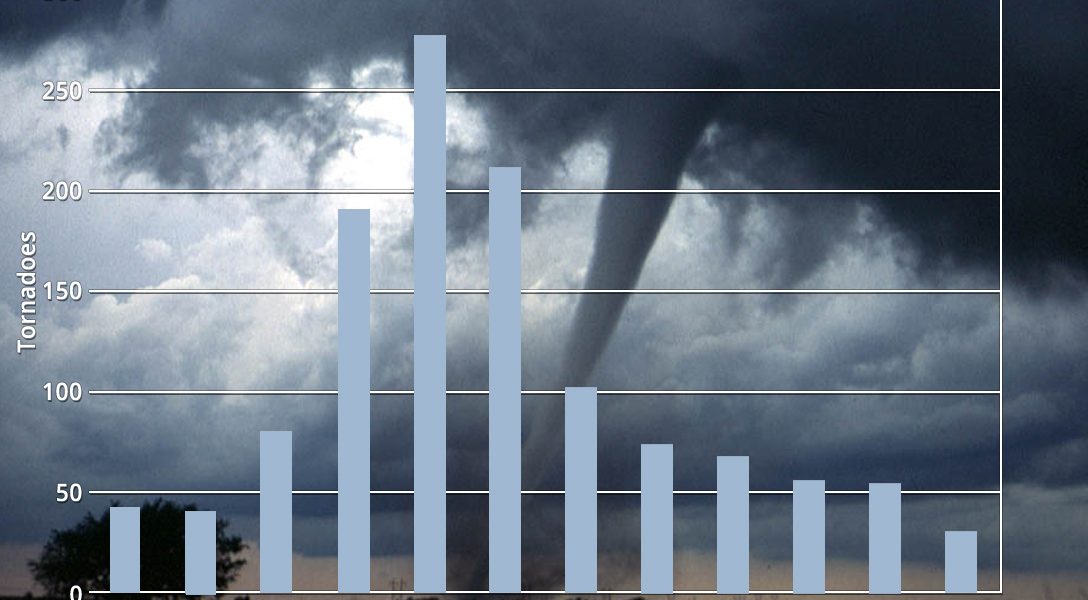 In many parts of the United States, this is the most dangerous time of year, and the danger comes from the sky.

This is peak tornado season. Tornadoes can occur any month of the year, but most appear in April, May, and June — and May is the worst. Their appearance does not surprise people who live in Tornado Alley (go here to see maps of it) but, possibly due to climate change, tornadoes seem to have been threatening other parts of the country more often recently. (Scientists say that “the most tornado-prone region of the country is shifting east,” but they are not sure why.)

Their power is awesome. Some reach spin speeds of over 300 miles per hour. They can pick up huge trucks and throw them great distances. They can tear buildings off their foundations, suck up the foundations themselves, and even uproot the underground plumbing. They can scour the asphalt off of a highway, the bark off a tree, and skin a cat. But even the less powerful ones can do a lot of damage.

Tornadoes come in all sizes and shapes, from wedge-shaped and over two miles wide to long, narrow, and serpentine, extending for miles horizontally with only the tip descending to the ground.

Sometimes when they first descend, they may be invisible, with the only manifestation of their ghostly presence a savage stirring at a spot in the grass. Gradually, a tube of white condensation materializes, and connects that spot in the grass with a cloud high above. Then the tube turns brown with sucked up soil.

Even before they appear, the atmosphere can fill you with a sense of foreboding. The sky becomes an eerie green, and the air is still and oppressive. Birds and bugs become silent, and, to the west, you might see what some have described as a “premature dusk.”

In early August of 2008, at about 4:30 one very humid afternoon, I got off an elevated train in Chicago and was startled by what I saw in the sky, although no one else seemed to think anything of it. The sun was where it belonged, still pretty high, but it was trapped under a net of  clouds — and it seemed to be bleeding. Emanating from the trapped sun were deep reds and oranges, the colors of sunset — all wrong for that time of day, and for that high a place in the sky. I ran all the way home. Three hours later, we were hit by a tornado.

For what seemed like an eternity, I stayed under my bed listening to non-stop, overlapping claps of thunder. And the tornado siren was itself a melody of doom, full of what musicians would recognize as diminished fifths, a combination of notes considered demonic in medieval times, and thus forbidden. (To listen to it, go here)

There are many videos of tornadoes on Youtube, but too often they feature storm chasers who focus the camera on their own faces while giving scant attention to the tornadoes themselves. Also, they talk too much and play loud music.

Today, we present a video by an exceptional storm chaser, Hank Schyma, known as “Pecos Hank.” It shows the McCook, Nebraska, tornadoes from May 17, 2019.

These dancing clouds of mist are a spellbinding sight, and Schyma gives us a sustained, intimate look at them. And he lets us listen to them. What are they saying?