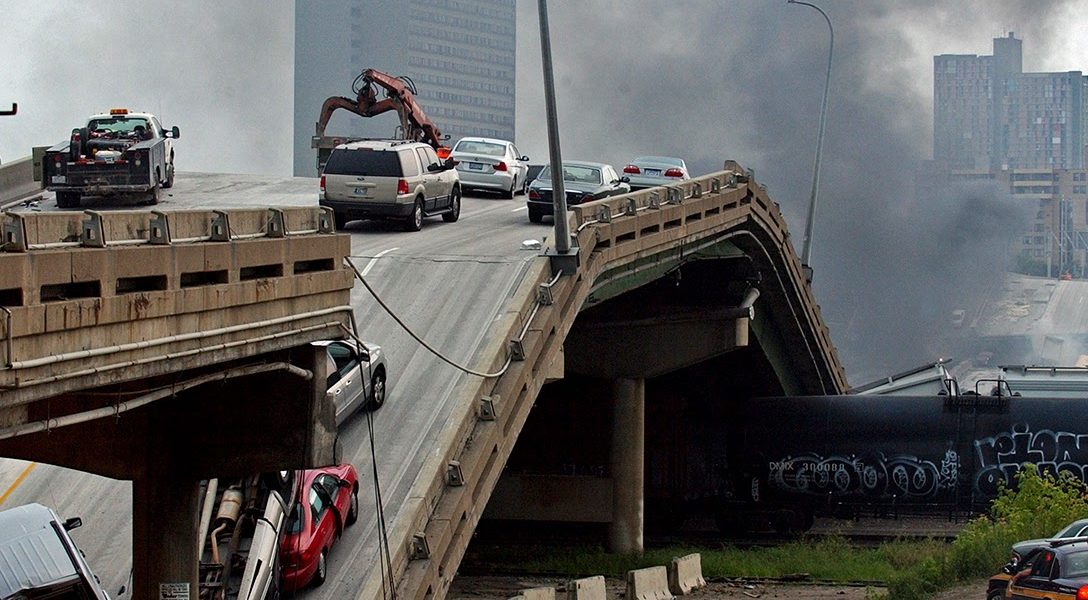 Infrastructure. The very word is as gray and crumbly as concrete. Though it means many things to many people, it often conjures images of torn-up sidewalks, bumpy roads with potholes, twitchy railroad tracks, and aging bridges on the verge of collapse that tremble when you blink. And beneath this aging surface, the hidden menace of ancient pipes carrying steam, raw sewage, natural gas, and other hazardous liquids just waiting for a chance to explode.

Top it all off with a black, smoke-filled image of your loved ones in a car under a collapsing railroad bridge carrying a “bomb” train with highly flammable crude oil.

Terrorists who want to see America destroyed should just be patient.

For specifics, check out why the American Society of Civil Engineers (ASCE) gave this country’s infrastructure a grade of D+. (And to see if you are living near tracks that carry bomb trains, go here.) The ASCE report is its latest, but it is from 2017. Since then, some things have gotten better, and some have gotten worse.

It would be much more fun (yes, “fun”) to learn about all these horrors — from John Oliver. Nobody explains anything better than Oliver. He will leave you laughing and crying, and maybe plotting to get even with those responsible.

Next, we present a mesmerizing video of the August 1, 2007, collapse of a major bridge in Minneapolis, MN. As you watch this story unfold, bear in mind that, of the over 600,000 bridges in the US, one in 30 is built like this one, that is, “fracture-critical,” which means that if one critical piece were to fail, the entire bridge could collapse.

When a Bridge Falls: Disaster in Minneapolis (9:56)

Below is a small collection of yet more videos on this dangerous and chronic situation in America.

US Bridges in Danger of Collapse