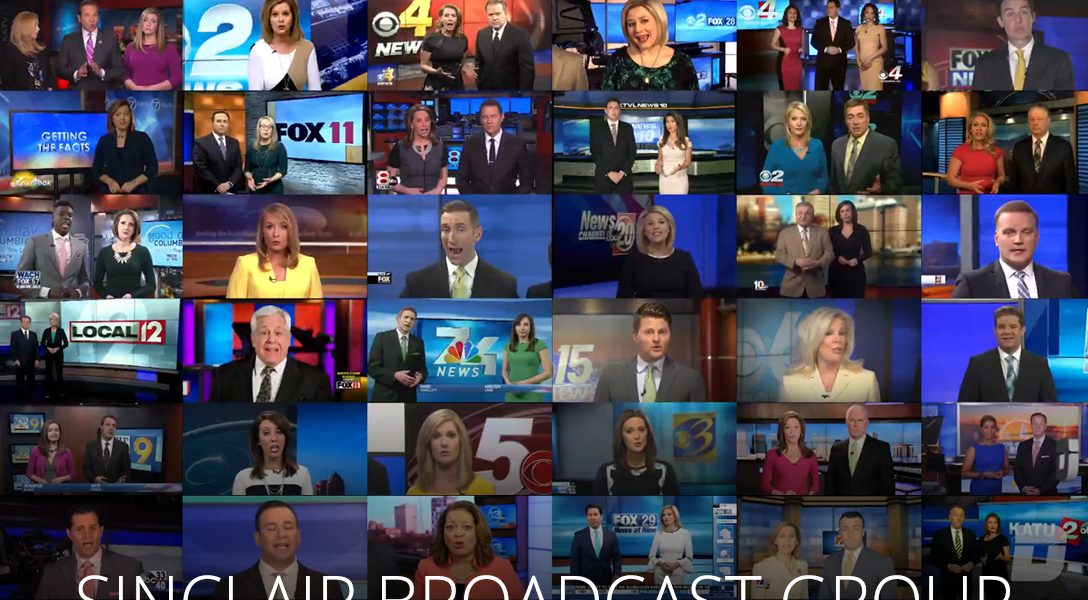 That news outfits are mere conveyors of unbiased information is a conceit almost no one entertains, particularly with regard to developments in Washington. But still, it’s rare to see such an orchestrated endorsement of a president’s message from a network other than Fox News.

The Sinclair Broadcast Group, the owner of 193 television stations, has managed to operate in relative anonymity until last Saturday, when a 90-second clip revealed that news anchors were told to recite a series of scripted promos lambasting what they considered the biased, fake news-touting liberal media. Deadspin posted the now-viral supercut of anchors robotically delivering the same lines, spliced or layered atop one another to form a chilling chorus of right-wing propaganda.

Some of the script’s more dire warnings are notably Trumpian:

“The sharing of biased and false news has become all too common on social media.”

“Some members of the media use their platforms to push their own personal bias.”

“This is extremely dangerous to our democracy.”

As it turns out, anchors are fed up with parroting President Donald Trump. Some argue that the promos, which are part of Sinclair’s “must run” content, deprive viewers of local stories that are more relevant to their lives. In an op-ed for the Huffington Post, a former reporter — a Republican — blasted the company for spreading propaganda “disguised as real journalism.” Among the blatantly biased questions he was instructed to ask is: “How much do you disagree with Obama this year?”

This isn’t the first time the company has injected general conservative dogmas into local broadcasts. In 2004, Sinclair’s Washington bureau chief said he was fired for decrying a program critical of Democratic presidential candidate John Kerry.

The Fake News Networks, those that knowingly have a sick and biased AGENDA, are worried about the competition and quality of Sinclair Broadcast. The “Fakers” at CNN, NBC, ABC & CBS have done so much dishonest reporting that they should only be allowed to get awards for fiction!

But Sinclair’s leadership is impenitent. “Do you understand that as a practical matter every word that comes out of the mouths of network news people is scripted and approved by someone?” chairman David Smith wrote to the New York Times, defending the concept of mandated content without addressing its substance.

That the group can so brazenly promulgate a partisan agenda is in no small part due to the disparity between its obscurity and its accruing influence over local news. Though its stations include affiliates of the widely watched ABC, CBS, and FOX, few viewers knew of the boss calling the shots on content creation. Michael Copps, the former chairman of the Federal Communications Commission (FCC) under President George W. Bush, dubbed Sinclair the “most dangerous company most people have never heard of.”

And its grip on cable news may soon grow tighter. Last May, the company struck a $3.9 billion partnership with Tribune Media. Should regulators approve it, the transaction will bring Sinclair-mandated programs to seven of 10 American homes. The deal was all but sealed when the FCC voted in October to repeal a 42-year-old ban on mergers between newspapers and TV stations.

Watch the videos below to see how the company manipulates reporting on local stations across the country.