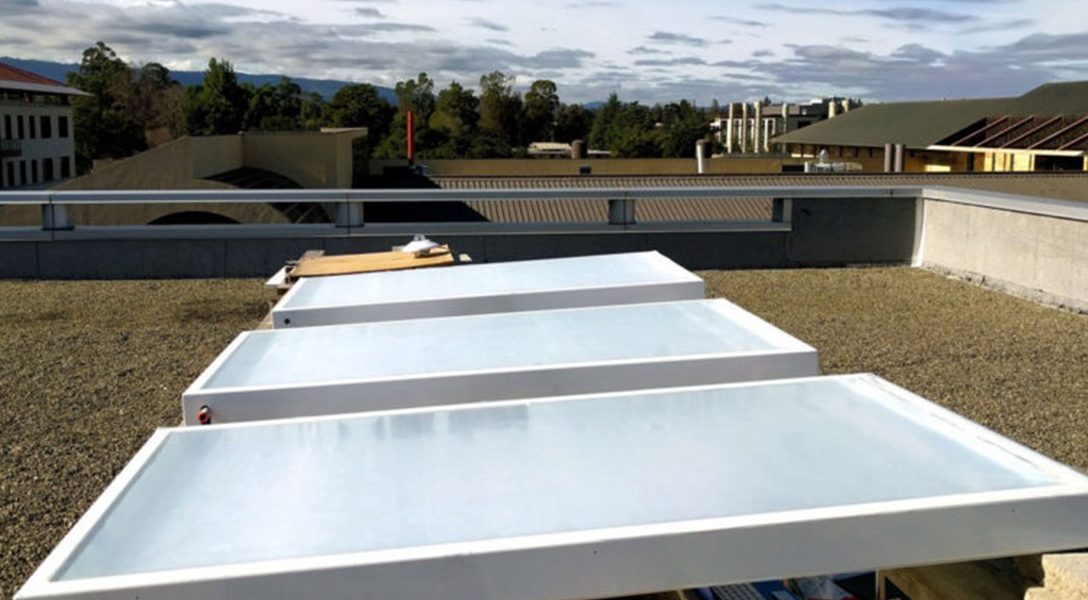 Science Fact — Harnessing the Cool of Space to Save the Planet

The US uses a lot of energy to keep itself cool — the same amount that the continent of Africa uses for everything. 75 percent of homes have at least one air-conditioned area, and then there’s all the industrial-level refrigeration that keeps food fresh, and industrial-scale data systems functioning.

The worldwide demand for cooling is rising, in line with standard-of-living increases in developing countries with warm climates such as India, Mexico, and China. This demand, while unquestionably positive for the health and well-being of millions, spells trouble for the environment.

The amount of electricity the world will need — just for cooling — could rise to 10 trillion kilowatt hours by 2100, which is equal to half the total electricity used last year for all purposes.

As a result, to help reduce the impact of air conditioning on the planet, scientists are looking to an ancient technique of making ice in the middle of the desert — by harnessing the cold of deep space.

Air conditioners as we know them today have changed little since they were invented over 100 years ago. They rely on chemical refrigerants which have a potent greenhouse effect when released into the atmosphere. Take that into consideration alongside the huge amount of power it takes to run traditional air conditioners, and it’s clear that an increasing demand for cooling will add to global warming, causing more of the unstable weather events we have witnessed in the past year: hurricanes, floods, and wildfires.

In fact, this demand for cool homes and commercial structures may give rise to a self-defeating “feedback loop,” where the cooling systems employed to combat rising temperatures create great amounts of greenhouse gases, which in turn lead to warmer temperatures.

China saw its percentage of air conditioners per head double in five years, and the use of power to cool is expected to rise sixfold by the year 2050 in developing countries.

Problems like this are what keep physicists like Aaswath Raman up at night. He and his team at Stanford University used a branch of nanoscience called nanophotonics to invent an extremely thin (40 times thinner than a human hair) optical material that does two things simultaneously, Raman explained:

“First, it sends its heat out precisely where our atmosphere lets that heat out the best. We targeted the window to space. The second thing it does is it avoids getting heated up by the sun. It’s a very good mirror to sunlight. The first time I tested this was on a rooftop in Stanford… . I left the device out for a little while, and I walked up to it after a few minutes, and within seconds, I knew it was working. How? I touched it, and it felt cold.”

To come up with this remarkable material, Raman, who is now at the University of Pennsylvania, first solved the mystery of how ancient civilizations in Mesopotamia managed to make ice despite living in the middle of the desert. They would pour out a thin layer of water into a man-made shallow pool at dusk. By early morning they could harvest ice, despite the air temperature being above freezing. They were harnessing a phenomenon called night-sky cooling, or radiative cooling.

“This pool of water, like most natural materials, sends out its heat as light,” said Raman in his recent TED talk. “This is a concept known as thermal radiation” he went on to explain. “We are all sending out our heat as infrared light right now, to each other and our surroundings.” This is what gives hot things, such as humans and moving cars, their bright red, orange, and yellow hues when seen through a thermal imaging camera. The water in that man-made shallow pool sent its heat out into the upper atmosphere, where the atmosphere absorbs some of it. “That’s actually the greenhouse effect that’s responsible for climate change,” Raman explained.

The key to radiative cooling is that “our atmosphere doesn’t absorb all of that heat — if it did we’d be on a much warmer planet. At certain wavelengths, our atmosphere has what’s known as a ‘transmission window.’”

Because of this, some of the heat that is traveling up as infrared light is able to escape into the upper atmosphere, and further out into deep space, where the temperature drops to -454 degrees Fahrenheit.

In searching for a practical application, Raman came up against the problem that this phenomenon occurs only at night; during the day the the heat of the sun counteracts the effect of radiative cooling. However, the material that Raman created can send some of its heat out of the atmosphere even during the day — it also functions as a mirror, bouncing sunlight up and away, which ensures that the material itself stays cool.

The first video below is a short intro from a Bloomberg description of deep space cooling. If that piques your interest, go ahead and watch the second, longer video — a TED talk on harnessing outer space cold by Prof. Aaswath Raman himself.