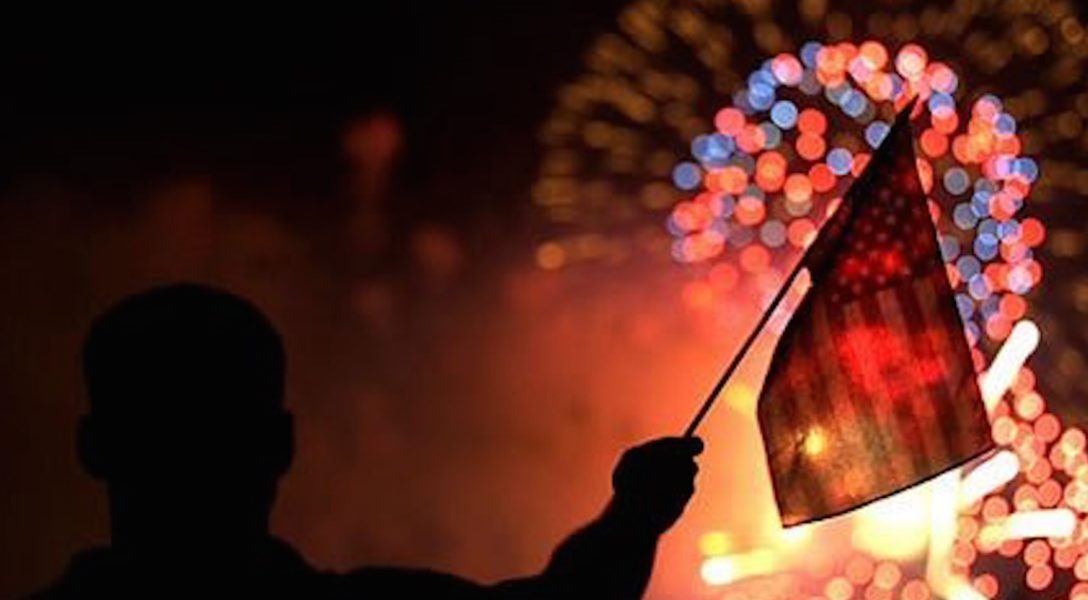 Watching as the nation celebrated its 226th anniversary, an American flag is held up high from the South Lawn of the White House July 4, 2002 Photo credit: George W. Bush Archives / The White House
Video

Celebrating the 4th of July is all about pride. Pride in being an American. Pride in the virtues America stands for. And one of these virtues is the ability to question authority — although its citizens don’t always do so (or look kindly at those who do), especially when they are consumed by fear.

When people are afraid, when they don’t understand what is happening, their instincts tend not toward self-reflection and critical analysis. They want answers — an Enemy. And often times the few voices crying in the wilderness for caution — asking tough questions — are simply drowned out.

In the wake of 9/11, the government presented ready-made answers. Intelligence appeared to tie Saddam Hussein to al-Qaeda and Osama bin Laden. Evidence was presented to the UN showing Iraqi weapons of mass destruction. Who could forget Colin Powell holding up that model vial of anthrax — a moment he now considers a “blot” on his career.

Even the news media, whose job it is to question power and the narratives spun by those in power, demonstrated that they themselves could be manipulated — or even be willing co-manipulators.

As the Bush administration was trying to gin up support for the Iraq invasion, the rest of the world was not so thrilled by the idea. Bush had tried to go to the United Nations to assemble a multilateral coalition for the invasion, as his father George H.W. Bush had done over a decade earlier, leading to Operation Desert Storm. But when an authorization for the use of military force failed to materialize, the US Congress decided to give Bush permission to unilaterally (with the help of a few allies) embark on a pre-emptive war. France was particularly outspoken in its criticism of America’s planned military action.

While Bush claimed that “God told me to me to end the tyranny in Iraq,” French President Jacques Chirac warned:

“I think that the relationship between the French and the Americans, the human relationship, is a relationship of friendship. Of love even, I would say. But if I see my friend or somebody I dearly love going down the wrong path, then I owe it to him to warn him be careful…”

Americans on the other hand, were squarely behind their president. Polls show that in 2003, 72% of the US public supported the decision to use military force in Iraq.

In reaction to this opposition, many Americans expressed their disdain for the French in one of the most bizarre “boycotts” ever. It manifested itself in a rejection of the term “French” from french fries in fast food restaurants across the country. Instead, people began referring to the ubiquitous American meal as “Freedom Fries.” The phenomenon gained widespread media coverage.

Nevermind that french fries possibly didn’t originate from France (likely Belgium instead). The point was that Americans were angry with the French for their opposition to the war, and wanted to disassociate them from this popular food. This was about “freedom.” Bush himself announced to the nation on live TV the launch of Operation Iraqi Freedom on March 19th, 2003. Why were the French opposed to freedom?

Five years later, after Bush declared “Mission Accomplished,” the American public had come to realize that the the wool had been pulled over their eyes. Not only had the public been deceived into a preventative war, but Congress had borrowed trillions to pay for it. Thousands of American soldiers had died, thousands more wounded, hundreds of thousands of Iraqis were dead, and the Middle East was left completely destabilized. The world is still living with the aftershocks today.

This was not the first time that people in high places have manipulated the public’s patriotism for unjust purposes. And it surely isn’t the last. America itself has been a victim of this deception before — just study how the country got involved in the Spanish-American war for example.

As America celebrates its Independence Day, its citizens reflect on the good that this country has brought to the world, and what it means to be an American. One of the reasons for this is to remind themselves of the value of liberty, its fundamental goodness. It’s understandable to want to focus on the good parts of its amazing history. But it’s good to also be reminded that patriotism can be wielded like a sword if the citizens, and a free press, are not continually vigilant to fight for the truth.