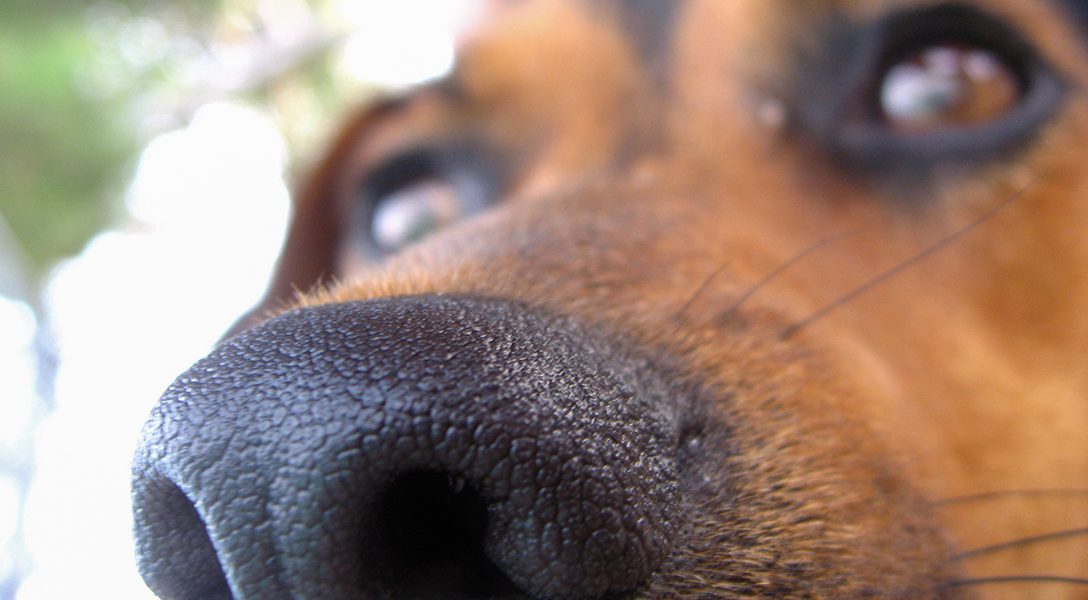 Passing the Smell Test: How Dogs Can Sniff Out Cancer

A dog’s nose is such an awesome, complex, powerful instrument that NASA, working with Einstein and Tesla, couldn’t replace it with billions of dollars of equipment.

With their noses, dogs can actually distinguish between identical twins, as proven by rigorous tests, even though twins have the exact same DNA. No one knows how they do it, but the investigators tried to make sure all things were equal, that each twin ate the same food, and lived in the same place, etc.

They can detect Semtex, a plastic explosive designed to be odorless. They can find marijuana packed in a plastic bag submerged in gasoline within a gas tank.

And it was recently discovered that their sense of smell tells them when you have eaten, smoked, exercised — or had sex. (It’s a good thing they can’t talk, because they know too much about you.) In her book Inside of a Dog: What Dogs See, Smell, and Know, Professor Alexandra Horowitz — who runs the Dog Cognition Lab at Barnard College — describes how dogs perceive people:

Humans stink. The human armpit is one of the most profound sources of odor produced by any animal; our breath is a confusing melody of smells; our genitals reek. The organ that covers our body — our skin — is itself covered in sweat and sebaceous glands, which are regularly churning out fluid and oils holding our particular brand of scent. When we touch objects, we leave a bit of ourselves on them; a slough of skin, with its clutch of bacteria steadily munching and excreting away. This is our smell, our signature odor.

And don’t think soaking in a tub will help you escape from a dog whose job it is to find you. You not only stink, you litter the environment with your used skin cells, making you easier to find:

Humans have around 40,000 pieces of tiny flakes called rafts that are constantly shed from the skin. These rafts consist of skin cells, hormones, enzymes, fungus, bacteria, parasites and hygiene products. No skin rafts are identical, not even from identical twins, which means we all have our own unique scent that our canine friends can smell. Because some rafts are lighter than air, they are picked up and carried in air currents. Heavier rafts are dispersed around the ground and vegetation as we pass by. We also leave behind scents from our breath and sweat. In a way, we leave a sort of “scent cocktail” of individual smells that rush into the nasal cavity of a dog.

This may explain all the amazing stories of dogs finding missing persons and criminals. Like the one about a dedicated bloodhound tracking a kidnapped five-year-old girl for seven hours, traveling 14 miles from the site of the abduction. The police found the little girl’s body only a mile from where the dog had stopped to rest. The next day, he found the suspect in a nearby apartment. That same dog has identified at least 25 suspects in lineups, and has a 100 percent conviction rate.

Over 10 years ago, anecdotal accounts of dogs detecting cancer by smell began to emerge. Then came solid evidence. Here are just a few examples of dogs identifying which body fluids came from cancer patients as opposed to the large number of normal controls.

Labrador retrievers have detected colorectal cancer by smelling the exhaled breath and watery stool samples from patients with the disease. Results: Scent detection of breath samples compared with conventional diagnosis by colonoscopy was 0.91 percent, and the specificity was 99 percent. Scent detection of stool samples was 97 percent, and the specificity was 99 percent. The accuracy of canine scent detection was high — even in cases of early cancer.

Giant schnauzers, in limited studies, have detected cancer cells in the blood of ovarian cancer patients after they were treated and were presumably cancer-free. In other words, the dogs could even smell microscopic cancer cells. Later, the cancers recurred, apparently as a result of those residual cells. (This suggests dogs could be used in the future to check whether patients really are cancer-free.)

German shepherds have detected prostate cancer by smelling urine — with nearly 100 percent accuracy. More recently, researchers have determined the “molecular signature” of what it is that the dogs are smelling, and have found ways to detect it without the help of a dog — but with less accuracy.

Below we present videos on this magnificent creature. The first offers a guided tour up a dog’s nose and into its brain, where much real estate is dedicated to sorting out smells. The rest of the videos show dogs doing what they do best.