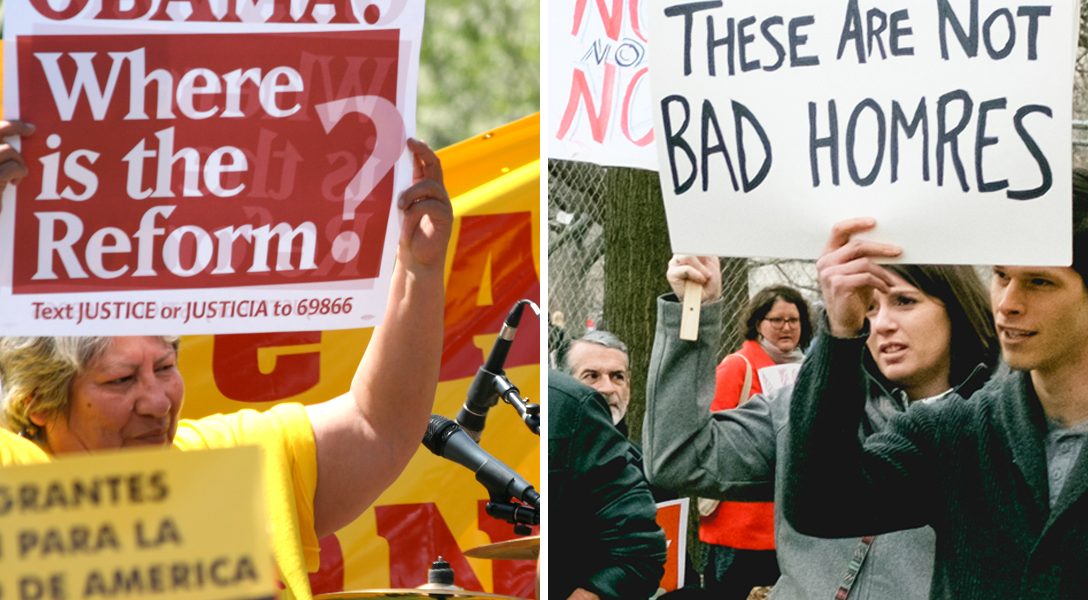 How Does Obama’s Record on Immigration Stack Up to Trump’s?

President Donald Trump ran an election campaign on promises to build a “Great Wall” on the southern US border that Mexico would pay for, and to conduct mass deportations. Recently, the Immigration and Customs Enforcement (ICE) agency stepped up arrests of undocumented immigrants, causing great fear in Latino communities. Many on the left, including presidential candidates Hillary Clinton and Bernie Sanders, decried his policies as xenophobic and racist. Yet how do the president’s proposed policies and recent actions compare with those of his predecessor Barack Obama?

Immigration reform advocates have criticized Obama, saying that his immigration policies, including the creation of a “deportation machine,” enabled the Trump administration. President Obama was even labeled “Deporter in Chief” by some because he deported around 3 million undocumented immigrants, more than any other previous president. One of the featured videos below shows Obama being confronted by a heckler because of his deportation policies. But the occasion of this confrontation, an immigration reform rally, is instructive.

The differences between Trump and Obama regarding the fate of the millions of undocumented immigrants could not be any more disparate. Obama championed comprehensive immigration reform through Congress, while Trump has argued that immigrants are taking away needed jobs from American citizen and should be forcibly returned to their home country.

Gridlock in Congress prevented immigration reform legislation from passing, yet Obama tried to secure legal status for some 5 million illegals by executive order. This order was blocked by a 4-4 decision of the Supreme Court in 2016, which left in place a lower court ruling that determined that the president had overstepped his bounds.

Though the 3 million deportations attributed to Obama sounds like a lot, the numbers are misleading because of how the definition of “deported” changed during the George W. Bush administration. In prior administrations, undocumented immigrants who were caught crossing the border were simply bussed back across, a process known as “catch and release,” and not counted as official deportations. During the Bush years, the policy changed so that those caught crossing were officially detained and fingerprinted by ICE, leading to formal charges.

Notably, in 2013 nearly two-thirds of deportations were of undocumented immigrants within 100 miles of the border, many of whom had recently crossed. And rarely mentioned is the fact that illegal immigration from Mexico has been in decline since 2007.

Ironically, Obama was first criticized for not doing enough on his own to stop what was perceived as excessive deportation practices, instead seeking comprehensive immigration reform through Congress, then later accused of overreach because of his executive order.

No one yet knows if Trump is truly serious about carrying out his proposed border wall and deportation plans. But it is apparent that the paradigms of Donald Trump and Barack Obama on illegal immigration represent two very different and incompatible ways of solving a problem. Now that Trump holds the reigns of executive power, undocumented immigrants will continue to hold their breath.