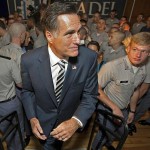 Must-Watch: O’Donnell on Romney and War

What kind of a man, really, is Romney?  Probably the most revealing glimpse we will get is his personal history with regard to war. And in this case, no one has explained it more powerfully than Lawrence O’Donnell. You might or might not be a fan of his show. It does not matter—you will be glad you watched this one….all the way through. As long as he was not one of the young men sent to war, Romney was for it!  He actually demonstrated for the War in Viet Nam and supported the draft!  He just knew he would never have to serve so he was safe.  He had five years of deferment status, hiding out in France and trying to recruit members for his church.  This is shameful and he, Mitt, seems to have less character the more things come out about him… Being a rich guy raised in privilege is one thing, but the more I hear the more he sounds not only out of touch but out of true character and morals and ethics.

Combat Cowards? O’Donnell wants it both ways. He can pose as a
hypothetical willing killer but in the same breath deny it and then condemn Romney who simply did what was legally his right.

Even if O’Donnell is the worst slime of the Earth, how does that exonerate or excuse Romney’s dodging war when it his right, but then encouraging war now that he stands to profit?  I guess you can call it all his right.  A lot of people are offended by Romney’s expression of these rights.  Romney is running for President, HE is the issue.

Interesting.  Can you elaborate?

The chicken-hawk streak in the political right is one of the most pitiful failings of humanity.  It is even more pitiful that the rest of us have not found the stop to them.

When I hear “Skull and Bones” I think of those horrible pictures from post-Pol Pot Cambodia.  Andm yeah, I think Skull and Bones is just a college group… like I think Pol Pot was just an Asian politician.

O’Donnell’s criticism is heavily based on hypocrisy of promoting war while afraid to participate in combat.  It is a very good point.  I, for one, care and will not and never have rationalized it away.

A more important point about war, and promoting war – especially the “long war” against terrorism – is the hypocrisy of fighting violence with violence.  It requires an examination of the nature of conflict.  Not “this” conflict of “that” conflict, but “conflict” itself.

The problem with that, especially for active participants in the political system, is that you will get to the point of recognizing that your identification with a “side” in a conflict is the root of the problem, all other things being equal.  Simply being American means you are in conflict with non-Americans.   It’s prima facie ridiculous, but on and on it goes.  However, Romney’s assertion that his sons are serving the country by helping him run actually makes sense in this context.  And he’s obviously a big believer in class distinctions.

One other thought.  What is the survival rate of a warrior these days?  There must be good information on which wars had specific fatality rates, and how those rates compare to other population segments, such as certain cities, countries, occupational groups, smokers, obese people, etc.  It is an important point for O’Donnell to consider, because if it’s only a matter of fear of combat that makes political leaders hypocritical, then the whole drone war concept would be just fine, wouldn’t it?

The problem with O’Donnell and with a great segment of “public” is simply bravado, even if it’s tough guy criticism under a veil of “I’m just as scared as anyone else.”

Smarter than Your Average Bear

Thanks Russ – Lawrence is right on the money here.

So what? Seriously, so what? Clinton avoided the war and it didn’t prevent him from being elected. The same with Dubya and Cheney. Obama didn’t serve.

At the rate things are going, if this angle is repeatedly pushed, you’ll conjure a military dictatorship. “Hey, you all wanted someone who served their country honorably, and now you’ve got what you’ve asked for….and by the way, there will be no more asking for anything. Just be grateful you’re alive.”

I think you missed….all of the points. Maybe did not actually watch? One of many points is how Romney and his family have been so very enthusiastic about wars, and about other men going to fight and die in them, while managing not to go themselves. Comparisons with Clinton and Obama in that regard are wide of the mark.

Russ, I get the point. The fact of the matter is, no one really cares about that hypocrisy. It can, and is, rationalized away. Sure, it matters to you and me and a few others, but it’s the least of my concerns. My larger concern is the fact that the U.S. Government is now a division of the Corporate-Military Industrial Complex and the position of president has been relegated to Puppet-In-Chief whilst strengthening the power of the Executive exponentially so the ones holding the strings have carte blanche to do anything, anywhere at anytime with no legal/political implications. Complete impunity and immunity.

Truthfully, to me at least, it makes no difference whether Romney or Obama resides in the White House in 2013. On policy that really matters, the effect will be the same. They’re just two different ad campaigns for the same product, just as sure as a Kia is a Hyundai.

How good and righteous of you, Dan. And by implication of your statement, you would have us believe that the “American People” care about it as fervently as you do, and therefore, there’s no choice but to vote for Obama because he’s the obvious lesser hypocrite. What I care about more is the transparency of that bait and switch tactic in attempting to get independents to come back to Obama’s flock, or don’t leave Obama’s flock. It’s duly noted that you didn’t reply to the rest of my retort….just the “care” part. The problems this world now faces cannot be solved by partisanship or bipartisanship. Solutions will have to be inculcated outside of the corrupted and deviant political process. There is no voting your way out of this mess.

on this particular, and rather narrow point, I do agree. Obama has done virtually nothing of substance that he promised.. worse, he’s done the opposite in many cases… he’s just a better speech deliverer than most.  A talking head that sells well.

I can’t believe you so thoroughly missed the point of this video… watch it again and then look at your statement.

What kind of a man, really, is Lawrence O’Donnell?  Probably the most revealing glimpse we will get is his personal history with regard to journalism. And in this case, no one has explained it more powerfully than Lawrence O’Donnell himself. You might or might not be a fan of his show. It does not matter—you will be glad you watched this one….all the way through.

I agree, O.  He comes across as a smug, patronozing gatekeeper.  I’m sure he’s probably right about Romney, but this video gives me pause as to who O’Donnell really is.  Is he about truth or about just  re-electing Obama.

I’d be curious if people here really believe that Skull and Bones is, as O’Donnell so elegantly puts it: “just a fucking college group”?

The substance of Mr. O’Donnell’s message regarding Romney is relevant.  Prior to seeing this piece, I had not known of Romney’s Vietnam dodging and war mongering from the sidelines.  Teflon Mitt.  War dodger profiteer, just like Dick Cheney, Don Rumsfeld, and GW Bush.

It is wrong for someone to dodge war for safety’s sake, then promote war on others’ skins.  That is just common sense, even if you are a jerk, like O’Donnell and me,  about how you try to explain it.

You’re right in that I was probably a bit too hasty in writing off what O’Donnell has to say about Romney.  It is important to get all the facts out about the people we have foisted up on us to elect.  Mitt appears to be a hypocrite, through and through.  But, I would have assumed that even before I watched this clip just from all other information available.  I would never, ever vote for the man.
Its interesting, however, that we never seem to get to know who the people are that are feeding us our information.   And,  judging from Orangutan’s clip, I wouldn’t trust anything O’Donnell has to say if this is an accurate portrayal of his personality off-air.  He lies about “Everyone knowing about Bohemian Grove”.  What?  Are you kidding?  Almost nobody knows it or what goes on there!  And why would he tell Rudkowski that “people are lying to you” about the Bilderberg Group?  What and why is he covering up?  Is he afraid he’ll lose his job?  If he’ll lie to some stranger that he thinks doesn’t know better, would he also lie to the American people on air?
Let’s face it, the Mainstream Media is dying a slow death and I welcome it.  I really appreciate this and other sites that aren’t afraid to report the truth.

This video shows the phoniness of the “aura of knowing” offered up by Mr. O’Donnell.  I wonder which other media heads might be vulnerable to unfounded confidence like this.

Mr. O’Donnell must assume that all significant, credible, relevant information pertaining to world power comes to his attention as a result his position in the media industry. He seems to assume the information processing taking place upstream from his position could not remove from view anything of major significance. That is a big boo boo, especially for a journalist.

I suspect Mr. O’Donnell might be acting more out of a preacher instinct than a journalistic instinct. He is excellent at presenting his point of view, but that doesn’t really qualify someone as a journalist.

I suspect we all are closed minded in our own ways.

So evil doesn’t exist in today’s world to the extent that it used to? What a supremely foolish idea!