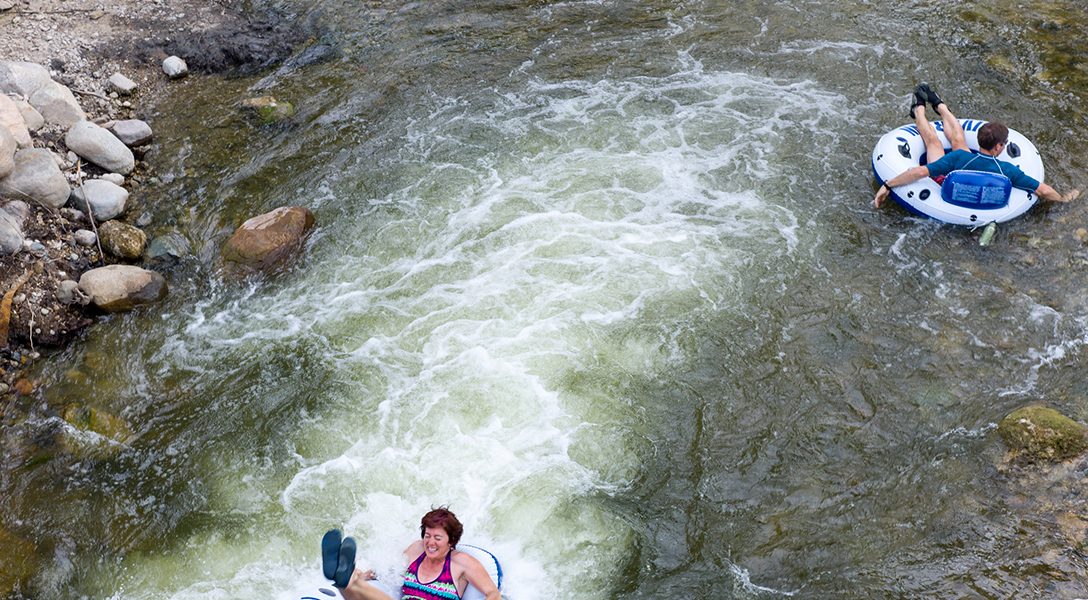 Tubing on Michigan’s Huron River might be OK, but they should not eat its fish. Photo credit: Andy Piper / Flickr (CC BY 2.0)
Environment Video

More Nasty Things in Your Water

Imagine how strong certain chemicals must be to snuff out a burning oil spill, or a jet engine. Or resist the heat encountered by non-stick pots and pans. Or repel water, oil and stains from clothing, carpets, furniture. And not wash out.

Imagine if these chemicals got into your body.

The miracle ingredient is PFAS, which is short for per- and polyfluoroalkyl substances, and includes a whole family of chemicals, some more toxic than others. They are so strong they are called the “forever chemicals.” After decades of use, they have seeped into groundwater, rivers and lakes, drinking water — and into your body.

The forever chemicals do not easily break down in the environment — or the human body. In one large study, PFAS was found to be in the blood stream of 98 percent of a representative sample of the American population.

In 49 states so far, the public water systems have been contaminated with PFAS, according to the Environmental Working Group. And the FDA warns that it is also threatening the US food supply. (One study shows in detail how PFAS interacts with fruits and vegetables.)

For nearly a year, a dairy farmer in New Mexico has had to dump 12,000 gallons of milk a day because his well water was contaminated by an underground plume of PFAS from nearby Cannon Air Force Base (military bases are major polluters.) It came from the firefighting foam used in training exercises.

In the state of Maine, farmers are dealing with PFAS-contaminated sewage sludge.

In Michigan, fish from the Huron River are unsafe to eat because of PFAS dumped into a wastewater treatment plant from a company that makes chrome-plated plastics for the auto industry.

Different sources claim different effects. Some may be exaggerated, some may be fraudulently downplayed, but, at the very least, it is fair to say PFAS is associated with the dangers described below, from the Secretary of the Navy website:

PFC/PFAS build up and remain in the human body and the amount reduces very slowly over time. So scientists and doctors are concerned about their effects on human health. While the evidence is inconclusive, according to the Agency for Toxic Substances and Disease Registry (ATSDR) some studies in humans have shown that certain PFC/PFAS may be associated with developmental delays in the fetus and child, including possible changes in growth, learning, and behavior, decreased fertility and changes to the body’s natural hormones,  increased cholesterol, changes to the immune system, increased uric acid levels, changes in liver enzymes, and prostate, kidney, and testicular cancer. More research is needed to confirm or rule out possible links between health outcomes of potential concern and exposure to PFC/PFAS.

Given the potential dangers, it is disheartening to see this report in the March 14, 2019, New York Times

Facing billions of dollars in cleanup costs, the Pentagon is pushing the Trump administration to adopt a weaker standard for groundwater pollution caused by chemicals that have commonly been used at military bases and that contaminate drinking water consumed by millions of Americans….

This subject is too complex for a short report, but the videos below can tell you more.

CNBC: How Military Pollution Could Cause The Next Water Crisis (21:27)

PFAS Contamination: How One Homeowner Took Matters Into His Own Hands (3:09)