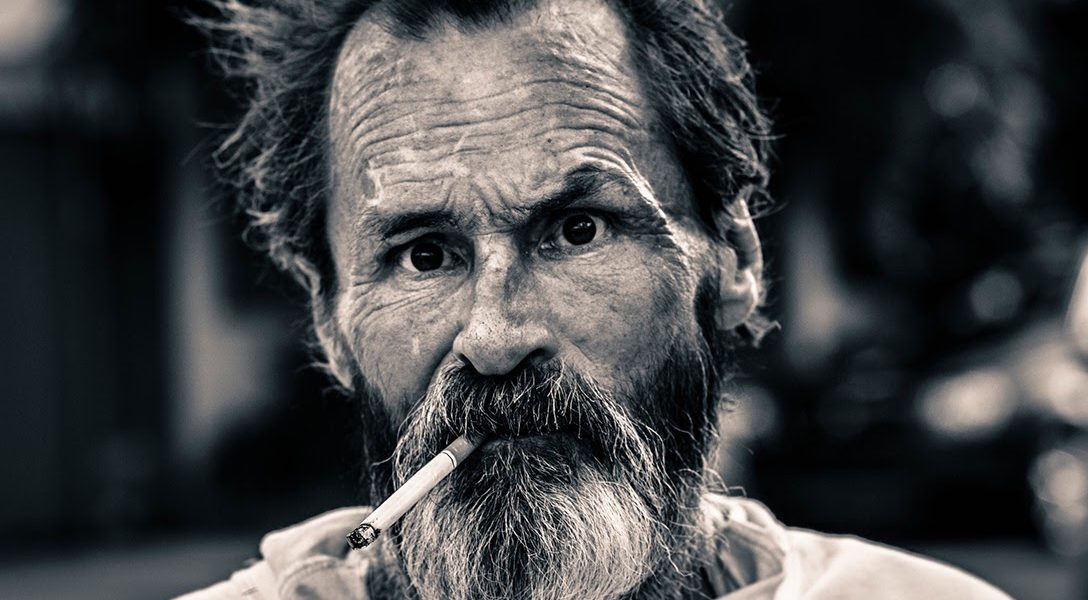 Homeless man, Miami, FL, 2013. “I got out of the hospital yesterday, but I'm just happy you boys let me go without beating me up today.” Photo credit: Jamesy Pena / Flickr (CC BY 2.0)
Video

Imagine this. You can barely hang on to your low-paying job. You have a terrible toothache — you can’t afford a dentist — but you still try to do the work. One day, you come down with the flu, but you work anyway. Your flu turns into pneumonia and you’re taken to an emergency room. You miss many days of work and, because you are paid by the hour, you lose money. A doctor prescribes an antibiotic but you can’t afford it, unless you want to give up food. Eventually, you go back to work, but find that you no longer have a job. Now you can’t pay your rent and the landlord has started eviction proceedings. After a loud knock at your door, policemen enter and they throw you out.

You have just been pushed over the edge. As you hurtle through space, you wonder where you will land.

You could end up as one of those bundles on the sidewalk, people who look as though they were wadded up into a ball, and then carelessly discarded. And you could even be evicted from the sidewalk. Then where will you go?

Or, if you still have a car, you could live in it. In San Diego, there’s a whole parking lot full of nothing but homeless people living in cars. Though uncomfortable, they manage to sleep. They bathe in the public facilities nearby, and are presentable enough to work at low-paying jobs. They are the luckier ones.

More than 550,000 Americans are homeless, and 1.4 million spend time in shelters in a given year, according to the Washington Post. And, the Post reports, “Data show that men, black Americans, the mentally ill, domestic-violence survivors, substance abusers and veterans all experience homelessness at higher rates.” The cause, according to one study: in each state, there is a direct correlation between homelessness and the cost of housing. Duane Nichols sits at his North Beach spot as residents gather on a train platform waiting for the OC Sheriff to remove homeless people in San Clemente, CA, on Friday, May 24, 2019. Photo credit: © Jeff Gritchen/SCNG via ZUMA Wire

Here are some of President Donald Trump’s responses to the problem, which frequently seem to be triggered by things he sees on Fox News and are directed at people he believes have wronged him:

Nancy Pelosi’s District in California has rapidly become one of the worst anywhere in the U.S. when it come to the homeless & crime.“It has gotten so bad, so fast – she has lost total control and, along with her equally incompetent governor, Gavin Newsom, it is a very sad sight! (Tweeted Dec. 26, 7:59 AM)

California and New York must do something about their TREMENDOUS Homeless problems. They are setting records! If their Governors can’t handle the situation, which they should be able to do very easily, they must call and “politely” ask for help. Would be so easy with competence!  (Tweeted Dec. 28, 8:33 AM)

In September, he warned San Francisco that the EPA will be issuing the city a “notice” because its homeless are harming the environment.

“There’s tremendous pollution being put into the ocean. There are needles, there are other things. We can’t have our cities going to hell.”

Trump appears to have taken credit for reducing homelessness in one area: “You know, I had a situation when I first became president. We had certain areas of Washington, D.C., where that was starting to happen, and I ended it very quickly.” (It’s not clear what he ended. When it comes to the rate of homelessness, taking into account the population of the region, Washington, DC. ranks first, followed by New York, Hawaii, and California.)

Below, we present two videos that show how much “they like living that way.” As you view these, you might keep in mind that sixteenth-century saying, “There but for the grace of God, go I.”