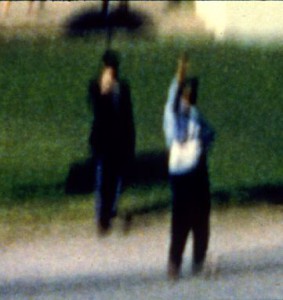 The article has struck a nerve, and generated considerable interest. With that in mind, I’d like to offer some additional thoughts on the subject.

As you’ll recall, the New York Times’ preferred explanation for why a man opened an umbrella on a sunny day, just as JFK’s limousine passed—and just as the bullets poured into the car— was an entirely benign one. Strange, but benign.

Recap: Fifteen years after the assassination, as the special House Select Committee on Assassinations was taking the first serious look at the death of JFK (and others), a man came forward to identify himself as the so-called “Umbrella Man” and to explain his bizarre behavior.

The man, Steven Louie Witt, said that, no, it was not someone signaling the shooters, and no, it had nothing at all to do with the assassination. Instead, he said, it was a message against appeasement of enemies. He hoped to signal his disapproval of what he considered JFK’s forbearance of America’s enemies.

How to signal that? Here’s where it gets complicated. Witt claimed he held up the umbrella as an icon symbolizing the treachery of Neville Chamberlain, the 1930s British prime minister. Chamberlain, who tried to preserve peace with Hitler by ceding him a part of Czechoslovakia (the Sudetenland), became a reviled symbol of appeasement. The self-described Umbrella Man said that he had been identifying appeasement with Chamberlain’s trademark umbrella. The connection to JFK came via his father, Joseph P. Kennedy, ambassador to Britain at the time and an anti-war isolationist.

Only a very unusual 15-year-old American (Witt’s approximate age in 1938) would have strong feelings about a British prime minister’s behavior, and still harbor those feelings a quarter century later. It is even harder to accept that he could believe JFK, himself a young man in 1938, might “get” the message somehow via the umbrella.

Even if we are to accept that Witt really was the man pumping the umbrella on the Grassy Knoll, and even if he was cognizant of Chamberlain, and even if he did think he could get a message to JFK via the Chamberlain affair, we still have a big problem with this claim.

According to John Simkin, a retired British history teacher and textbook author who runs the historical website Spartacus Educational, the umbrella was never the symbol of Chamberlain that the “umbrella man” claimed it was.

“In Britain, there was never any association with an umbrella at all,” Simkin told me. “Everyone had umbrellas and bowlers in those days.” According to Simkin, the only proper symbol for Chamberlain and appeasement was a piece of paper. That was the document he held aloft, with Hitler’s signature to the so-called Munich Agreement—in which Hitler agreed not to seek any further territorial gains in Europe—as Chamberlain famously declared that he had secured “peace in our time.” (In this old newsreel, you can see Chamberlain hold aloft that document.)

Simkin finds the New York Times video’s assertion that the purpose of opening the umbrella and pumping it in the air to signal Munich simply laughable.

More likely, it was exactly what it appeared to be: a method of signaling shooters, perhaps that JFK had been hit, perhaps that he still seemed to be alive, perhaps to keep shooting. Although it was a sunny day, it had rained the night before, and there was a wind, so it would not have been operationally illogical to move forward with using an umbrella. The fact that the New York Times and the establishment in general have never considered the umbrella worthy of real, serious inquiry, tells us that if the umbrella was part of a plot, it was not so bad a choice.

In the last article, I mentioned that Witt, the self-proclaimed “Umbrella Man,” worked for Rio Grande National Life Insurance in the Rio Grande building. I mentioned that the same building housed the Immigration office frequented by Lee Harvey Oswald, and the local office of the highly negligent Secret Service. I mentioned that Rio Grande wrote a lot of insurance for the military. And, separately, I noted the strong military intelligence connections to key figures connected with 11/22/63.

One thing I did not mention, but should have, was that Military Intelligence itself had offices in that Rio Grande building.

Now, all of that could be coincidence. But there’s a reason certain entities signed leases with particular landlords and not others—especially so in Dallas circa 1963 (more on this in Family of Secrets.)

Some of our readers wondered why I did not mention another figure who acted strangely as Kennedy’s limo passed. This was the so-called “Dark Complected Man”—so named because his complexion was his most readily identifiable feature in photos from November 22.

I left him out of the initial piece because I wanted to focus solely on Umbrella Man, who, after all, was the sole subject of that New York Times video I was considering.

Nevertheless, Dark Complected Man is without question an extremely important character. Maybe even more deserving of scrutiny than Umbrella Man.

Dark Complected Man (DCM), like Umbrella Man, was on the Grassy Knoll, and, like Umbrella Man, appears to reasonable observers to have been signaling. At the precise moment that JFK’s car passed, as Umbrella Man opened and pumped his umbrella repeatedly, Dark Complected Man shot his fist up into the air. To some, DCM seemed to be calling for a halt to the presidential limo, which did in fact either come to a complete halt or slowed down to a crawl.

It’s not just their actions at the moment that Kennedy’s head is blown apart. It’s how they behave afterwards.

Instead of reacting with horror and springing into action, these two purported strangers sit down together, on the curb, and calmly survey the chaos. In their icy nonchalance, they exhibit an almost professional detachment.

Another intriguing thing about DCM is that in photos, something that looks like a radio or walkie-talkie appears to be protruding from his back pocket.

Taken together, Dark Complected Man and Umbrella Man add real bulk to the mountain of circumstantial evidence for a conspiracy in the death of JFK.

Maybe we do have The Times to thank, after all. Although that whimsical video was intended to discourage inquiry, it has had exactly the opposite effect. It goads us to focus diligently on long-ago events that “the paper of record” will not scrutinize—and that cast a shadow over democracy to the present moment.