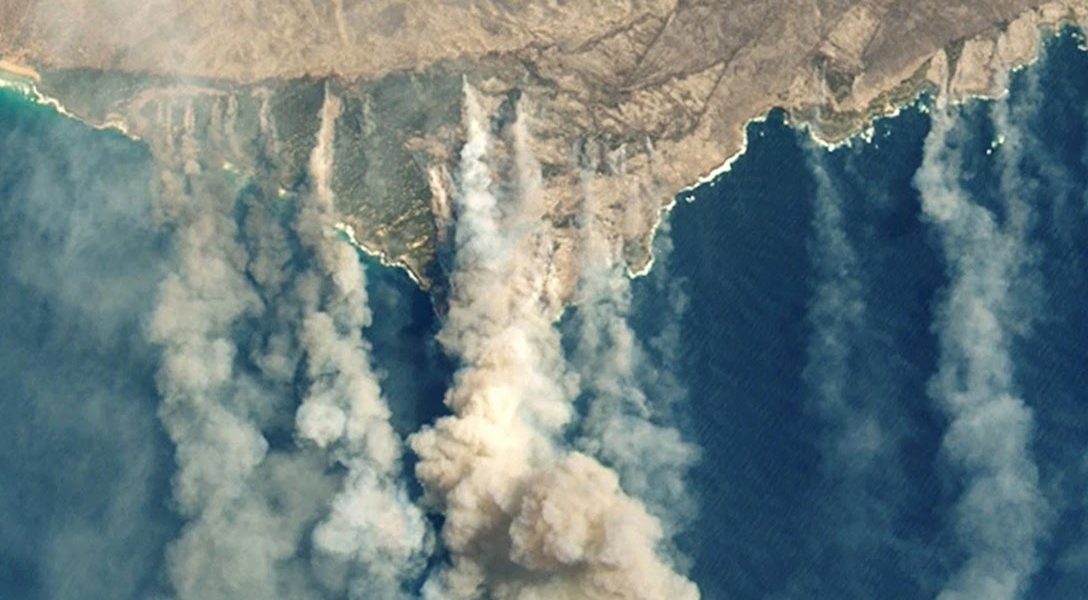 Hell and High Water in Australia

Australia has endured intense heat, severe drought, dust storms, and catastrophic fires burning their way through everything in their path, destroying wildlife and vegetation that could take decades to regrow. And in some places, the soil is so scorched it may not be able to support plant life in the future.

While the fires are still going strong in some areas, the rainy season came. But rather than offering relief from misery, it brought wild winds, hail storms, and flash floods, toppling trees and causing landslides. Floods also wash huge quantities of ash into rivers, dams, and eventually the sea, where “they will likely pollute water supplies and kill aquatic wildlife.”  And here’s an additional horror: the heat and moisture brought a plague of poisonous spiders out into the open. What next? It’s impossible to keep up with the situation, for it seems to change every day.

How does all this affect the rest of the planet?

A swirling plume, about the size of the continental US, has completely circled the Earth, pumping around 400 millions tons of carbon into the planet’s stratosphere.

This happens due to a mind-boggling phenomenon. Intense fire creates its own weather because smoke creates thunderstorms. Hot rising air mixes with ash and smoke that, in the cooler air above the fires, evolve into stormy pyrocumulonimbus (pyroCbs) clouds that “pull smoke up from near the ground like a chimney, and … inject it into the stratosphere.” (For a deeper analysis on how this works, please go here.) Could the smoke in the stratosphere cool the earth? David Peterson of the US Naval Research Laboratory said of the smoke, “It’s very likely on a volcanic scale.” But although a volcanic eruption can put enough aerosols into the atmosphere to have a cooling effect, “the different chemistry of pyroCbs means the impacts of the fires on global temperatures aren’t yet entirely clear.”

Because of Australia’s wildfires, the yearly rise in carbon dioxide may be 2 percent higher than it would otherwise be. Not all the CO2 emitted remains in the atmosphere. Normally, about half is taken up by the oceans and by plants and soil. But some say the ocean is now so saturated with carbon dioxide that it cannot absorb much more. Some say there won’t be enough plant life to absorb the CO2. Some say that, as the planet gets hotter and the soil becomes dryer, plants die and may absorb less CO2. Another grim thing to consider: when it’s warm, microorganisms in the soil produce more CO2.

Mesmerizing satellite views of the smoking planet can be glimpsed in the first two videos below. They show plumes from the southeastern coast of Australia reaching deep into the stratosphere, where they are being carried all around the world. Note how individual plumes, separated by great distances, suddenly pop up before your eyes.

We also present a collection of short videos that reveal a close-up of this tragedy, as well as a sweeping long view that provides surprising context.

Why Australia’s Fires Are Linked to Floods in Africa (3:54)

Australia Wildfires Explained | The huge size and why the fires are happening (3:38)