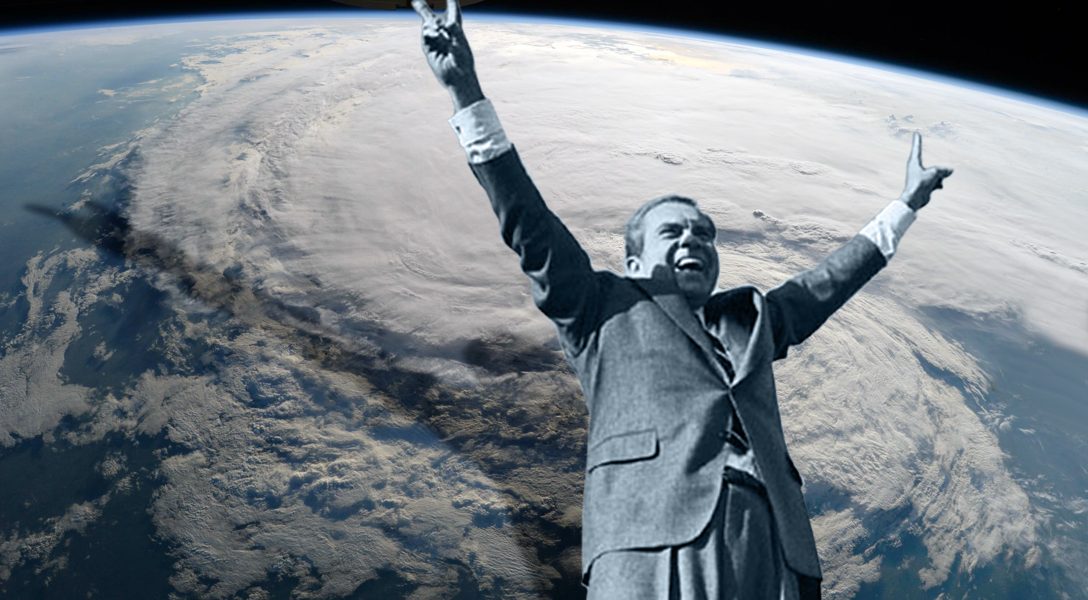 A fortnight ago, Hurricane Harvey became the third “500-year” flood to wreck Houston in three years. Though wary of diagnosing any single storm as a consequence of climate change, climatologists argue that warmer air and oceans breed conditions in which storms can grow more powerful, damaging and frequent. The frequency of extreme precipitation events has consistently risen with atmospheric temperatures.

As the effects of climate change become more pronounced, however, so have GOP efforts to undermine its threat — and existence.

Leading the charge is President Donald Trump, who has firmly rejected the overwhelming consensus among scientists since the early days of his campaign, and famously proclaimed climate change a hoax. Since assuming the presidency, he’s insulated himself with a council of skeptics and mounted a succession of assaults on the environmental laws his predecessor enacted. Sen. Jim Inhofe (R-OK), the most creative in a long line of skeptics, once brought a snowball to the Senate floor to debunk the “myth” of global warming.

The Republican Party hasn’t always been so feverishly skeptical of human-caused temperature hikes.

In 2008, Sen. John McCain (R-AZ) made combating global warming a central issue of his presidential campaign, producing a bleak, now-iconic ad that features a blur of melting ice caps, congested highways and smokestack cities. Hardliners Chris Christie, Sarah Palin and Newt Gingrich all at one point acknowledged the reality of the phenomenon.

And it was President Richard Nixon who created the Environmental Protection Agency, the office that Scott Pruitt, a fellow Republican, is now seeking to dismantle from within.

How a growing number of conservatives so drastically reversed their party’s position on the most sizable crisis confronting the human race can be explained in equal parts by the power of interest groups and the partisan rift in Washington.

“Most Republicans still do not regard climate change as a hoax,” Whit Ayres, a Republican strategist, told The New York Times in June. But they don’t speak out because “it’s become yet another of the long list of litmus-test issues that determine whether or not you’re a good Republican.”

Some GOP lawmakers, though, are beginning to find the increasingly frequent occurrences of supposedly infrequent natural disasters too disturbing and glaring to ignore.

In February, a coalition of senior Republican statesmen and economists on the Climate Leadership Council proposed a “repeal and replace” deal to address the threat of climate change: retract the regulations and enact a standard carbon tax. The plan, according to the group, would not only generate more household wealth in the form of dividends but also allow the US to meet the emissions reduction commitment set by the Paris Climate Accord, a groundbreaking international pact from which Trump has since withdrawn.

Two months ago, amid more partisan acrimony than ever before, the Republican-controlled House kept an amendment to the defense funding bill that acknowledged climate change as a national security threat.

Still, the party that started the debate on climate change 47 years ago can hardly be considered a reliable ally of the planet.

Watch the videos below to learn about how Nixon created the EPA, and what a Tea Party co-founder would do to convince the GOP to invest in renewable energy.