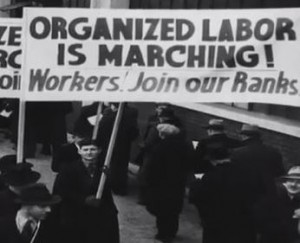 This documentary about the three Reuther brothers of the United Auto Workers, tells, through one very important union, the remarkable story of the rise and fall of organized labor. It also addresses the crucial symbiosis between unions and the civil rights movement.

For this viewer, it raises a great many questions, including about whether unions might not be in their dismal current state were it not for the untimely, violent deaths of their greatest allies and champions, including John Kennedy, Martin Luther King, Robert Kennedy, and Walter Reuther himself. Also intriguing is how Lyndon Johnson was able to keep the UAW and other unions on the sidelines for a long while during the Vietnam War, and the harm this may have done to labor’s cause.

You can click on the screen below to watch the official trailer…..You won’t see all of the above in the trailer, but you will in the full film. More information about the film here.