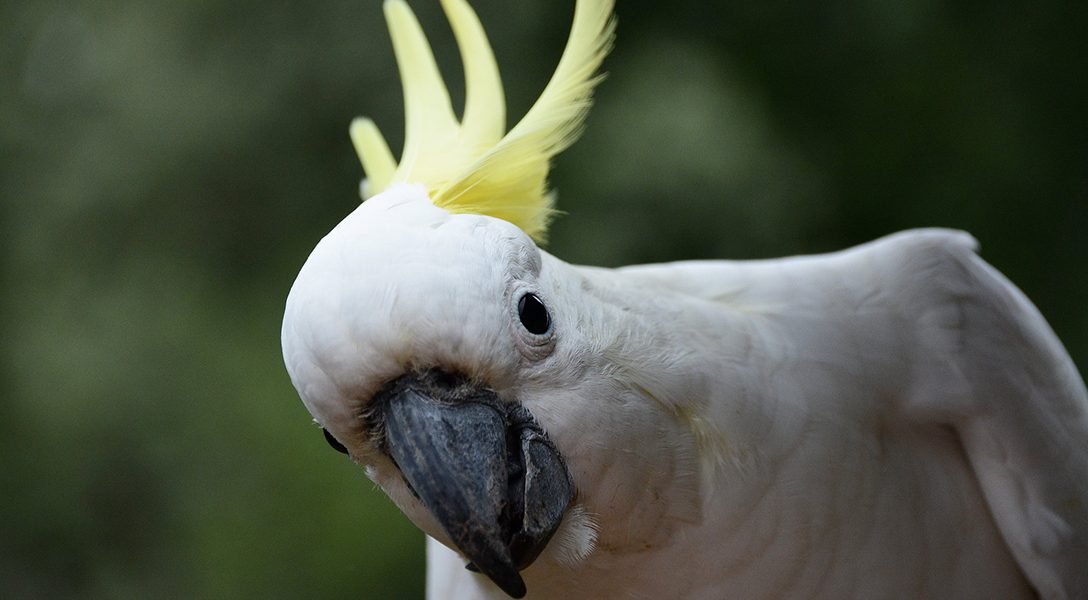 The first time I saw a video of Snowball the dancing cockatoo — with all his cool moves in response to Michael Jackson’s driving rhythms — I immediately thought some trick of photography was involved, though I saw none of the usual signs of such chicanery.

Then I wondered if the bird was imitating human movements, possibly for a reward. After all, many birds are deft impressionists. But such an imitation, if that’s what it was, would have already been amazing. Yet, the more I watched, the more I felt that Snowball’s moves were being driven by the music.

He tossed his head back, dramatically flipping open his crest of feathers like a giant fan, then threw his head forward, bopping away, two steps on one foot, two steps on the other, raising his wings and swinging his head in a great circle. He danced with such abandon! Such exuberance! He even improvised, while staying on the beat. (Below, we include several videos below that show this happy sight.)

Videos of him went viral, he became a guest on talk shows, acted in commercials and, in short — he became a star. Eventually scientists studied him, and reported amazing results: “Snowball … not only has rhythm but is also capable of creativity and spontaneity when he boogies. He utilizes various parts of his body to perform as many as 14 different moves — none of which were taught to him by humans or other birds, according to his owner.”

And they concluded his behavior “offered the first genuine support for a claim Darwin had made 148 years ago, but never proven: that animals perceived and enjoyed music as much as we did.”

There may be yet another dimension to this story — Snowball apparently tried to share his enthusiasm for dancing with the cockatoo sitting next to him. After listening to a few bars of Elvis’s “Don’t Be Cruel,” he gets into the mood of the song, gauges the rhythm, then nods rhythmically at the other bird, who will have none of it.

Then Snowball gets more into it, and — in response to the louder chorus, “Yeah! Yeah!” — he explodes into action, raising his wings and great crest of feathers as he moves his whole body. This just annoys the other bird, who raises a leg to keep Snowball from getting any closer, then flies away. The whole sequence is a jawdropper. (See the second video.)

(Snowball is not the only bird who dances. There are many other Youtube videos of dancing birds of various breeds, some of which have been authenticated by scientists.)

Our last video is of something different, although it, too, is about some amazing birds. “The Murmuration of Starlings.”

To some, watching this phenomenon is akin to a religious experience, and it is mesmerizing: thousands of starlings swooping back and forth, creating ever-changing, overlapping patterns, like iron filings slowly responding to a moving magnet, but more complex. Part of the show is the sound of the wind created by all those wings. I once witnessed this, walking on a lonely road through the woods in late fall. It was dusk, and there was a hush over the countryside. Then I heard what seemed like a whisper. I turned to look for the source, and witnessed the awesome sight of the flock arriving. As the birds came closer, the sound rose to a crescendo, like the roaring ocean. As they receded into the distance, the sound tapered off, until they came back again.  I felt like some restless spirit was trying to tell me something.

Cockatoo (Snowball?) tries to entice another bird to dance to Elvis

Snowball dances to “Another One Bites the Dust”

As much as I enjoyed watching the dancing cockatoo, the video of the starlings was absolutely stunning!

The bird “Snowball” in the first video is a sulfur crested cockatoo. The bird dancing to the guitar player in the second video is a Umbrella Cockatoo. Completely different species so definitely not the same bird as stated in the article.