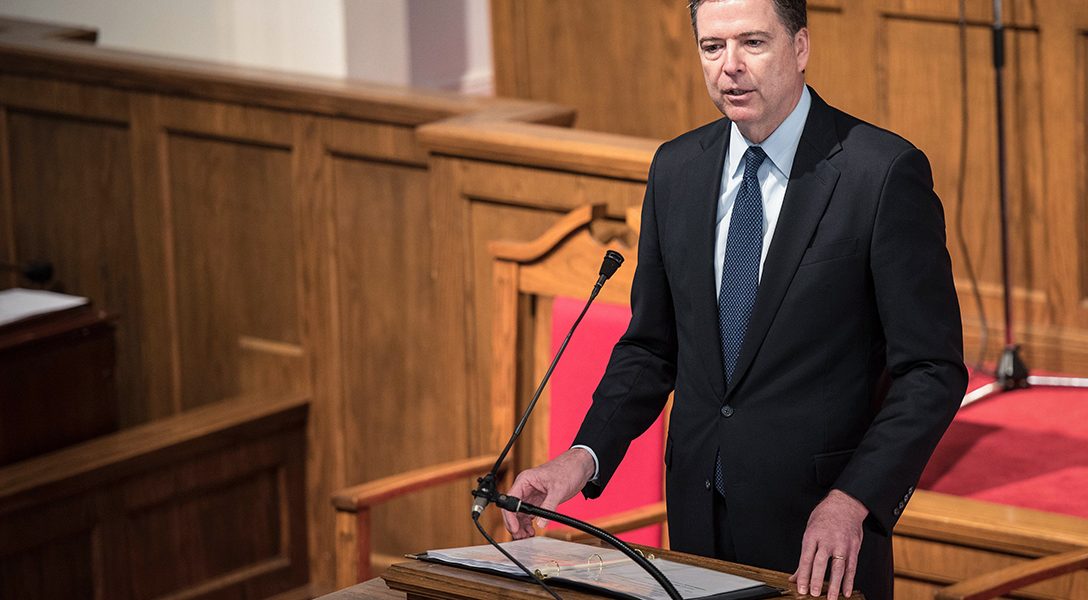 Comey Is No Stranger to Explosive Testimony

Nearly a decade to the day since James Comey delivered one of the most riveting testimonies in recent history, the nation is once again eagerly awaiting to hear from the recently fired FBI director.

Comey could testify on Capitol Hill as early as the upcoming week. While his name has been on front pages and leading newscasts for two weeks, the former FBI director has stayed out of the limelight — so much so that Senator Lindsey Graham (R-SC) joked, “We’re gonna have to put him on a milk carton.”

Lawmakers are eager to hear from Comey, especially about the circumstances of his firing and the contents of a memo in which he detailed a private conversation with President Donald Trump. According to news stories quoting people close to the former FBI director who had seen the notes, the president had asked Comey to drop the investigation of former National Security Advisor Michael Flynn.

Reportedly, the former FBI director began thoroughly documenting his encounters with the president after a handful of troubling conversations which led him to suspect Trump of trying to influence ongoing investigations into Flynn. The White House has since released a statement denying all allegations detailed in these stories.

However, now that former FBI director Robert Mueller has been appointed as special counsel for the Russia investigation, Comey might be limited in what he can divulge in open testimony.

This isn’t the first time he has had to tiptoe around sensitive information while testifying, nor is Comey a stranger to conflict between The White House and the Department of Justice.

Ten years ago, on May 16, 2007, he found himself in front of the Senate Judiciary Committee and shared an extraordinary story that is worth revisiting because it involves both Comey and Mueller. It is an account of the night in which top White House officials attempted to get a gravely ill John Ashcroft, who was attorney general at the time, to reauthorize a domestic surveillance program that DOJ opposed.

In his testimony, Comey gave a surprisingly vivid, unwavering account of the showdown in Ashcroft’s hospital room.

After the hospital incident, the domestic surveillance program was reinstated without consent from the Department of Justice, and Comey threatened to resign. Although that’s one card he can’t play anymore, his testimony alone will play a vital role in shedding light on how Trump is handling the pressures and responsibilities of the White House.

The second video is an interview with Democratic Senator Chris Coons (DE) on Comey’s memo and what it might mean for Trump.