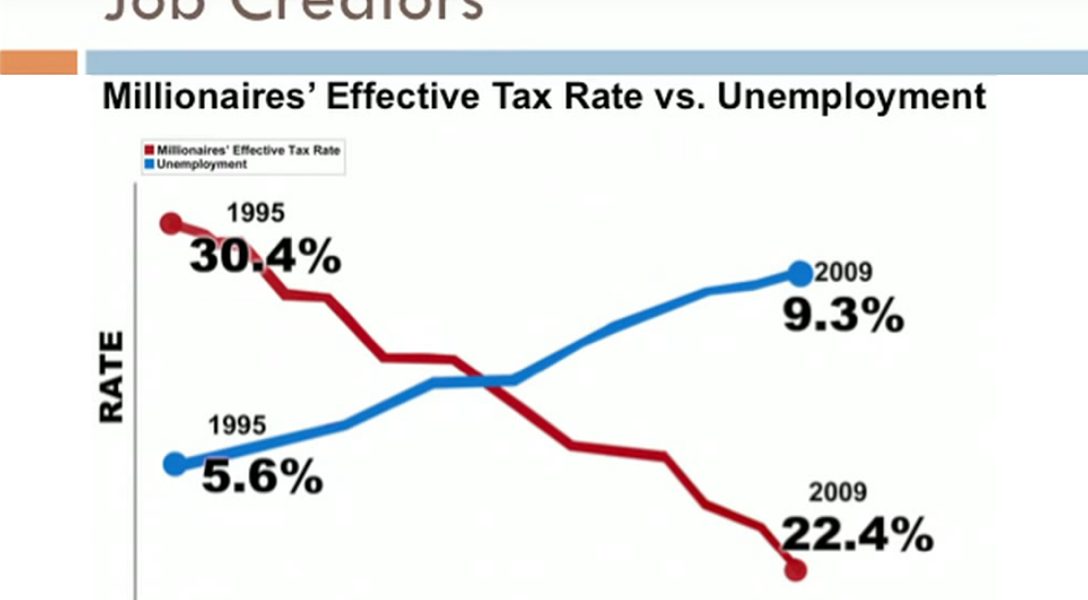 Classic Who: Rich Guy on How Middle Class Stalwarts Are Job Creators

Donald Trump is a self-proclaimed billionaire real estate mogul turned reality television star, who just happens to be the president of the United States. On Celebrity Apprentice, he did the hiring and firing. People believe that he is rich. Therefore, as he loved to repeat on the campaign trail, he was God’s gift for job creation. For all his chaffing against the GOP establishment, he is the living embodiment of the Republicans’ core mantra: the rich are the job creators; so don’t tax us. Unleashing the rich will be good for everyone. Trust us.

Unfortunately, this economic theory has a track record that can be easily consulted. For nearly the past 50 years in America, the rich have been getting richer and the poor poorer, while the middle class is being slowly shuffled out of existence. In the quest for higher profits, US corporations and their CEO figureheads have been working for their shareholders, who expect gains. Whether those gains are at the expense of the workers of those corporations, or whether they are bad for the environment, is not part of the equation.

But it’s not just the corporations to blame. Post-2008, Republican politicians are still holding fast to a bygone Chicago-school economic theorem which finds the rich at the center of a deregulated, laissez-faire economic solar system, with the masses in locked orbit. A paradigm shift is still struggling to take hold. But the fault lines in a post-Soviet world economic order are showing.

In the 2016 US presidential election, and ongoing elections worldwide, it has become evident that the masses are fed up, angry, and are desperately looking for the answer to their economic woes. Nothing else explains how a reality TV star could become the president, and a self-proclaimed socialist could almost clinch the Democratic nomination. Similar patterns are playing out worldwide.

The irony is that these policies are harmful to the elite themselves. If disorder reigns and the masses can’t afford to buy their products while trying to survive on $7.25 an hour, it hurts their bottom line. But don’t be mistaken, some of the wealthiest Americans have themselves been raising red flags. Here’s just one recent example.

Nick Hanauer makes thousands of times what most Americans make. But he isn’t eager to hire people. And his family only owns a few cars, a normal wardrobe, and eats out occasionally, like everybody else. Thus, he doesn’t spend a lot. So please explain how taxing him lightly creates a benefit for the rest of us?

Click on the screen below to watch this talk.

Related front page panorama photo credit: Adapted by WhoWhatWhy from men in top hats (Photos of the Past / Flickr).