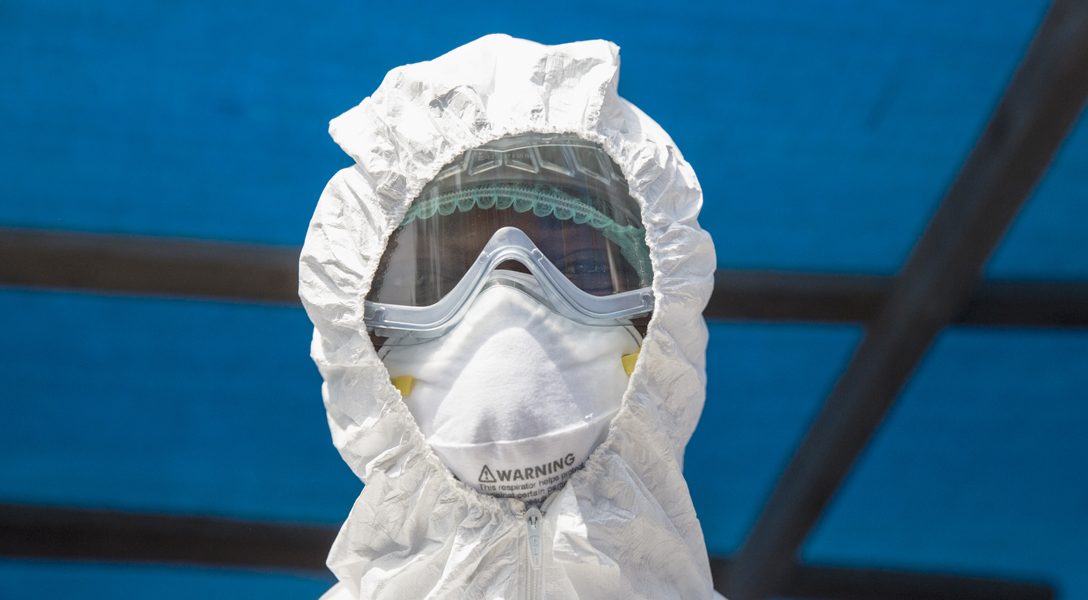 A victim in the late stages of the deadly Ebola virus brings to mind the dying man in Edgar Allan Poe’s story, “The Mask of the Red Death.” As Poe wrote, “Blood was its mark — the redness and the horror of blood.”

Ebola is one of the much dreaded hemorrhagic diseases that include Dengue, Lassa, and Marburg virus.

Let’s hope you never come in contact with it. But beware of travel to certain regions of Africa, especially the Democratic Republic of Congo (DRC). The world’s second biggest outbreak of the deadly Ebola virus is occurring in the eastern part of that country and, through travelers, it has already spread to nearby Uganda. (In 2014, 11,000 died in the biggest outbreak of all, which took place in West Africa.)

As of June 26, 2019, there were 2,284 new cases (of which 94 await confirmation). Of these, 1,540 have resulted in death. The average case fatality rate is around 50 percent, but figures vary (go here to see how the numbers grow from day to day). The outbreak is occurring in an area of armed conflict where treatment and containment of the disease are especially difficult.

In the late stages, victims bleed from the nose, mouth, ears, and — what is especially horrifying to see — the eyes. Their vomit, urine, and diarrhea are also bloody.

But before the bleeding begins, the disease can appear to be malaria or typhoid.

In the very early stages, the symptoms are only flu-like. It starts with a fever, weakness, sore throat, various aches and pains, bloodshot eyes, nausea, vomiting, diarrhea, and rash.

The reservoir, or source, of the virus is thought to be exclusively in Africa — especially in bats. It was originally spread by contact with infected animals, including chimpanzees and antelopes, as well as handling and eating “bush meat.”

Humans get it from contact with an infected person’s body fluids — and even their skin.

Currently, researchers are trying to develop a vaccine, but there is no FDA-approved or widely available vaccine yet. Researchers have high hopes for a vaccine called rVSV-ZEBOV, but statistics concerning its efficacy have been questioned.

According to the Centers for Disease Control and Prevention (CDC), the risk of a global spread of Ebola “remains low.”

In the United States, Ebola virus disease (EVD) is a very rare disease that has only occurred because of cases that were acquired in other countries, eventually followed by human to human transmission. The reservoir of the virus does not exist in the United States.

This may not be exceptionally reassuring to those who worry about cases “acquired in other countries” that may end up in their own country.

Notice from the CDC:

The Centers for Disease Control and Prevention (CDC) investigates serious contagious diseases on airplanes. If a sick person on a flight is reported to CDC and there is concern about Ebola, passengers are given a Travel Health Alert Notice and asked to complete a Passenger Locator Form so that we may contact them in the future if the sick person has Ebola. If a person with Ebola is identified after a flight and the person was showing symptoms during the flight, CDC will locate and notify passengers. CDC will connect these passengers with their health department so they can get information about any action or precautions they need to take.

What if the “sick person on a flight” is not reported to the CDC, or if there is no concern about Ebola when there should be? What if an Ebola-infected passenger is not identified, or assumed to have the flu? What if passengers exposed to this person are not located?

And what if passengers lie? In 2014, at a Liberian airport, a man lied on a questionnaire about his history of contact with an infected person. He was able to make his way to Dallas, TX, where he became extremely sick, was admitted to a hospital, and died. There, he infected two nurses.

Currently, the US seems to be on its way to being well prepared for treating the disease. As of August 2018, there are 10 academic medical centers around the US — equipped with sophisticated biocontainment units — to handle Ebola or any highly infectious disease. In addition, there is now a National Ebola Training and Education Center (NETEC) that provides online and onsite training to hospitals

This is all very reassuring, but we still worry about the possibility of a few infected people slipping through the cracks, people whose symptoms may not be recognized in time. We hope our concern is unrealistic.

Here is a fascinating video that shows the Ebola virus in action.