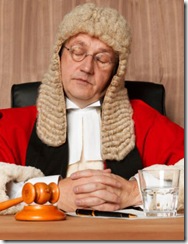 Worth Reading/Discovery: A Full Stomach and Justice Justice may be vigilant, but outside factors help

Favorable rulings have a lot to do with where a judge is in his/her daily cycle of decisions and nourishment breaks. So reports the Economist.

….Justice, say the cynics, is what the judge had for breakfast. Now they have proof.

A paper in the Proceedings of the National Academy of Sciences describes how Shai Danziger of Ben-Gurion University of the Negev and his colleagues followed eight Israeli judges for ten months as they ruled on over 1,000 applications made by prisoners to parole boards. The plaintiffs were asking either to be allowed out on parole or to have the conditions of their incarceration changed. The team found that, at the start of the day, the judges granted around two-thirds of the applications before them. As the hours passed, that number fell sharply (see chart), eventually reaching zero. But clemency returned after each of two daily breaks, during which the judges retired for food. The approval rate shot back up to near its original value, before falling again as the day wore on.

Of course, we don’t know whether the experiment controlled for unique effects of pita and humus. ;-)

To be sure, mealtimes were not the only thing that predicted the outcome of the rulings. Offenders who appeared prone to recidivism (in this case those with previous convictions) were more likely to be turned down, as were those who were not in a rehabilitation programme. Happily, neither the sex nor the ethnicity of the prisoners seemed to matter to the judges. Nor did the length of time the offenders had already spent in prison, nor even the severity of their crimes (as assessed by a separate panel of legal experts). But after controlling for recidivism and rehabilitation programmes, the meal-related pattern remained.

The researchers offer two hypotheses for this rise in grumpiness. One is that blood-sugar level is the crucial variable. This, though, predicts that the precise amount of time since the judge last ate will be what matters. In fact, it is the number of cases he has heard since his last break, not the number of hours he has been sitting, which best matches the data. That is consistent with a second theory, familiar from other studies, that decision making is mentally taxing and that, if forced to keep deciding things, people get tired and start looking for easy answers. In this case, the easy answer is to maintain the status quo by denying the prisoner’s request.

Two further findings buttress the idea that it is the psychological load of decision making which matters. First, the average unfavourable decision (unfavourable to the prisoner, that is) took less time to arrive at (5.2 minutes) than the average favourable one (7.4 minutes). Second, it also took more time to explain. Written verdicts in favourable rulings averaged 90 words, compared with just 47 for unfavourable ones.

Same thing with rude comments posted to our site ;-)

In truth, these results, though disturbing, are unsurprising. Judges may be trained to confine themselves to the legally relevant facts before them. But they are also human, and thus subject to all sorts of cognitive biases which can muddy their judgment. Other fields are familiar with human imperfectibility, and take steps to ameliorate it. Pilots, for instance, are given checklists to follow, partly in order to combat the effects of fatigue. Lorry drivers in the European Union are not allowed to drive for more than four and a half hours without taking a break. Dr Danziger’s co-author, Jonathan Levav of Columbia University in New York, wonders whether the law should consider similar arrangements. Some, of course, already do. English judges, legendary for their prandial proclivities, are way ahead of him.

The logical solution, of course, is to install a free, always-open, help-yourself food center in courthouses, of the sort companies like Google have. “Nosh on demand,” if you will. Then, the only remaining thing would be to let judges take naps (though not during proceedings) and maybe bring their pet to work. Let’s get some progress on.