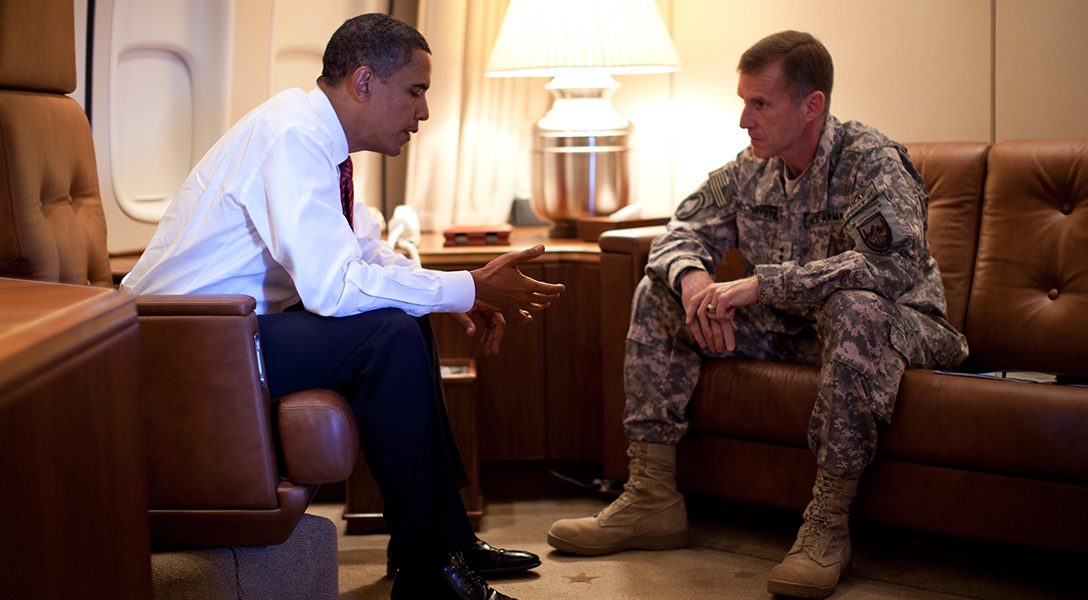 Bob Woodward’s affect is that of a human tape recorder. He claims that he is no more than a passive chronicler of events.  Yet he has played a significant role in the unfolding history he reports, from Watergate on down to the leak of General McChrystal’s memo pushing for increased troop strength in Afghanistan.  (See my earlier post, Obama’s Wars: the Real Story Bob Woodward Won’t Tell.

Well, here he goes again. Woodward’s new book has caused yet another event: the forced resignation of his inside source and patron, General James Jones, who had been Obama’s National Security Adviser. Jones had taken Woodward with him to Afghanistan on the trip to meet with General Stanley McChrystal, the commander in that theatre. Later on, McChrystal’s secret memo, essentially warning that the president, like LBJ in another era, had no choice but to massively escalate, appeared in a Woodward article.

McChrystal ended up being forced out of his position for critical remarks about Obama and his vice president, Joe Biden. Now, Jones, whose perspective is amply represented in Woodward’s book, has himself been ousted.

Why doesn’t Woodward report on how this power struggle between Obama and the military is being influenced by his own reporting-and explain why these generals are willing to keep dealing with him if the result is that they themselves are jettisoned? Why would they do so unless their criticisms of Obama are themselves sanctioned as part of an organized effort to push Obama—something deemed so important that powerful military figures have to fall on their swords? (If you think McChrystal’s remarks to Rolling Stone that “got him in trouble” were accidental-read these comments from the editor of that piece to Charlie Rose on how McChrystal and his team knew they were speaking on the record.)

ERIC BATES:  This is not the interview where somebody forgot the

reporter laid down his notebook and it was an off-the-cuff comment.  These were comments over a period of days and weeks, oftentimes repeated, in a culture there that was clearly like this.  They began within five hours of our reporter arriving.  Within five hours of arriving in Paris, they were referring to Joe Biden as Joe “Bite me,” saying those kinds of things openly in front —

CHARLIE ROSE:  And never saying to your reporter “This is off the record.  You cannot print this, I’m being open with you to give you a sense of the tone.”

CHARLIE ROSE:  “But do not under any circumstances print this.”

ERIC BATES:  Absolutely not.  They were very specific in interviews when they wanted something not attributed to them or when something was only for background and couldn’t be repeated at all.  It was very clear they knew the ground rules as well as journalists do, and we abided and respected their wishes.

It is not like McChrystal suffered inordinately. As noted in the blog post General McChrystal’s New Job: Dig a Bit, Please, a wealthy individual immediately created a nice place for the general at Yale. It’s a sure bet that Jones, too, will land on his feet, with a nice military pension, a platform for his views—and perhaps some lucrative earning opportunities in the vast private military contracting sector with such a financial stake in America’s perpetual role in foreign hostilities.

Woodward continues on his book’s victory lap, but you rarely if ever see major media figures pressing him as to his central role in this shadow play.

Meanwhile, Woodward’s paper, the Washington Post, which has benefited tremendously from  Woodward’s celebrity ever since Watergate, downplays Woodward’s precise role in all of this.

“Jones made clear that he intended to serve no more than two years. But several administration officials said Friday that his departure was accelerated by the publication of Bob Woodward’s book titled “ Obama’s Wars,” which portrayed Jones as a deeply unhappy figure often on the edge of important policy decisions.”

So, according to this, Jones was unhappy at being marginalized, and therefore left of his own volition.  What the Post does not do is address the close relationship between Jones and Woodward, and how that itself would have angered Obama (again, see the blog post below for more on that.)

The New York Times, with no stake in Woodward though a dedicated reticence to openly explore the nature of his work, notes that

Hastening General Jones’s departure, two administration officials said, were the quotes attributed to the general in Mr. Woodward’s book, in which he complained about being shut out of White House political debates by Mr. Obama’s political advisers.

The Times was even firmer on this point in another, earlier, iteration by David Sanger, the co-author of the piece containing the above passage. In the earlier piece, he styled it thusly:

General Jones’s departure had been long rumored, and he had previously indicated to his staff that he intended to leave by the end of the year. But the schedule was accelerated, and in recent weeks White House staff members had been increasingly critical of General Jones for statements that he apparently made to Bob Woodward, the author of “Obama’s Wars,” an account of the internal decision making on policy on Afghanistan and Pakistan.

None of this in the Post. Meanwhile, Woodward’s own past service in the military before becoming a reporter, certainly never appears in Post articles—though we definitely deserve more study of his role in top secret capacities and as briefing officer for some of the most powerful figures in the Navy and Nixon White House prior to his apparently obtaining an unusual early release from service. We also need to know more about the fact that his reporting, even while portraying military leaders as disgruntled toward civilian leaders, almost always has the effect of strengthening the hand of the military. We can hardly expect the Post to issue a disclaimer on the work of its own star. But this points to a broader and chronic problem at the Post—the failure to acknowledge its own role on the Washington scene, and how many events there are orchestrated with the media audience in mind.

So who’s using whom? It’s a situation that benefits multiple parties—the newspaper, Woodward, and the generals. Whether it benefits the public is something else entirely.