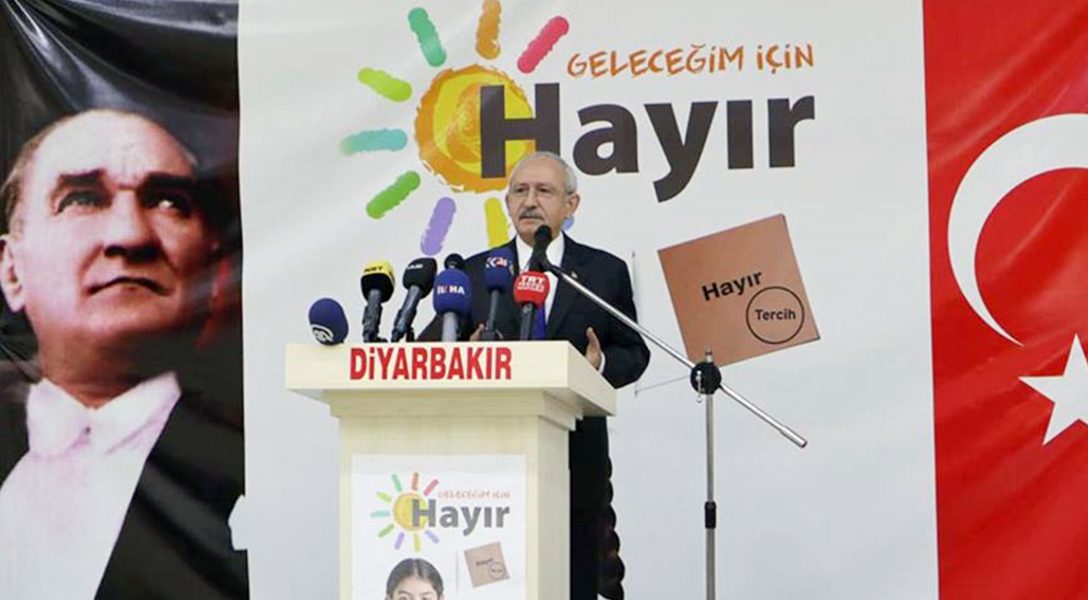 Will Turkey Vote to Become a Dictatorship?

Turkey is on edge ahead of a key vote Sunday that will determine whether President Recep Tayyip Erdoğan will be granted sweeping powers.

At stake in the referendum is nothing less than the legal basis for authoritarian rule in the country that hosts NATO’s second-largest army. Turkey is also a major transit zone for Syrian refugees headed to Europe, and a key Western ally in the Middle East. Plus, in just one of many early parallels between Erdoğan and Donald Trump, there could be a murky Russian link at the core of the convoluted intrigue that is Turkish politics these days.

Recent polls have shown a dead heat. However, Stockholm University’s Jenny White, a prominent expert on Turkey, told WhoWhatWhy the polls may be under-representing the “No” vote due to an atmosphere in which people are afraid to express criticism of the government, even to pollsters.

About the tweet below: In this “Yes” (EVET) campaign poster — shared by Ankara’s mayor and Erdoğan ally Melih Gökçek on Twitter — Islamic State leader Abu Bakr al-Baghdadi, the Sunni terrorist,  features in the “No” (HAYIR) camp. The poster is an example of the systematic demonization and intimidation the Turkish opposition has faced in the run-up to the referendum.

In a sign of desperation, White said, the Turkish government has recently been sending contradictory messages courting both the Turkish nationalists and the Kurds. The two groups are bitterly opposed to one another, and it’s a strategy that could easily backfire.

Even so, the “No” camp has a bigger problem: They are struggling to offer voters a clear path to a better future, whether they win or lose.

“The ‘No’ side hasn’t been very promising regarding the outcome of the referendum,” Gürkan Özturan, an opposition media activist and a former parliamentary candidate from the now-defunct Liberal Democratic Party, told WhoWhatWhy.

“The biggest thing they can offer is, ‘Vote No and this nightmare will be over.’ However, it will not be over.”

Özturan is not alone in believing that a “No” vote could easily turn into the beginning of a new ordeal.

“My prediction is we would be looking at an early election in 2017 in the event of a ‘No’ vote. An early general election in which the government would seek to achieve a parliamentary majority sufficient to pass those changes [to the constitution] in-house,” Ege Seçkin, a Turkey expert at the London-based global analysis firm IHS, told WhoWhatWhy.

Fear of a new spike in violence is also on everyone’s mind, in this edgy, polarized country of 76 million.

“If Erdoğan loses the referendum, … the government would have an interest in creating the impression that without the presidential system there is instability, and violence plays a very integral part in that,” Seçkin said. Erdoğan has ruled Turkey for the past 15 years. During most of his tenure as a prime minister, he was lauded in the West as a reformer and a moderate Islamist democrat.

Recently, however, things have gone badly awry. Erdoğan once famously compared democracy to a train in an interview with the Milliyet newspaper: “You get off once you have reached your destination.”

Over the past few years, the government has jailed tens of thousands of army and police officers, judges, prosecutors, journalists, academics, politicians and regular citizens — all the way down to the occasional high-school student charged with insulting the president on Facebook.

In recent months, Erdoğan has also picked a fight with Europe, calling the German and Dutch governments “Nazis” and calling for Muslim unity against the “crusaders” of the West.

Yet despite his frequent displays of force and bravado, experts say he is vulnerable and scared. “There’s no ideology behind what he does. There’s no theology here,” said White. “He is basically doing what he needs to do … under the pragmatic desire to stay in power and not be arrested for corruption.”

In 2014, barred from seeking a third term as prime minister and facing a corruption probe which he suppressed by firing police and prosecutors, Erdoğan ran successfully for president. Ever since, he has sought to retain control over the ruling AKP party, including when he forced out prime minister Ahmet Davutoğlu last year. The referendum Sunday is the crux of these efforts.

It’s not just the corruption investigation, which he has termed “a judicial coup,” that Erdoğan has to fear. Over the past few years, he has faced mass protests, a reignited Kurdish insurgency — which critics charge he was partly responsible for rekindling, in an attempt to ride a wave of nationalist sentiment — a long streak of terror attacks, and a failed military coup last July, which claimed over 300 lives. His supporters still blame the coup attempt on the US.

Some observers fear that the government could rig the elections, especially after an AKP official put photos of himself on Facebook holding a ballot in an AKP office in Germany, at a time when they shouldn’t have been there and in an apparent violation of the election procedure.

“I have heard from other sources who think [rigging the election] is possible, but I cannot confirm or deny to you that this would be the case,” Seçkin said. “But if they [Erdogan’s party allies] can, they would.”

Even without fraud, Erdoğan has a roughly 50% chance of coming out on top, if polls are to be trusted. The achievements of his early days, when the economy boomed, his strongman style and nationalist rhetoric have convinced many Turks that whatever his faults, he is the leader they need.

“I am critical of Erdoğan, but look how the West tries to eliminate every Muslim leader who has an independent policy,” said Musab, a city information guide in his late twenties, offering the fate of deposed Libyan dictator Muammar Qaddafi as an example. (Following a Western military intervention in 2011, Qaddafi was lynched by rebels.)

“Erdoğan stands for Turkey’s independence, and this is why people love him,” Musab, who did not give his last name, told WhoWhatWhy.

This brings up yet another twist in the maze of Byzantine intrigue that is Turkey today — even if Erdoğan wins, there is no telling what would happen.

“If it’s a ‘Yes’ vote, I think it can go in two directions,” White said. “He could go for an agenda of peace and reconciliation and improving the economy, or he can go towards destruction of his enemies, no matter what.”

White fears the second scenario could be more likely.

“[Erdoğan] could very easily, if he feels secure enough, just say, ‘OK! So now we go back to where we started in the early 2000s, we reach out to minorities, we solve the Kurdish issue, we fix the economy’,” she said. “But, personally, I think that’s unlikely, in part because I think he is still surrounded by enemies.”

Did Putin’s Allies Benefit from the Coup Attempt?

To explain why Erdoğan would have to purge his inner circle to pursue reconciliation, White notes that Turkish nationalists can’t abide compromise with the Kurds, and points to recent political gossip in Turkey about the aftermath of last year’s failed coup, whose resolution remains a mystery.

Several prominent Turkish journalists, as well as the main opposition party, have suggested that there was some kind of a backroom deal between Erdoğan and an inner circle of the coup plotters on that fateful July night, a conspiracy-within-a-conspiracy which perhaps enabled the president to hold onto power in exchange for unspecified concessions.

Particularly worrying, she says, is the rise of the so-called “Eurasianists” — a loose group of secular Turkish nationalists sympathetic to Russia — in the ranks of the security services. Many of them are widely believed to be at the core of the “deep state” Erdoğan had been railing against in his early years, and hundreds of them were jailed on trumped-up coup charges in a mass trial that just ended.

“They are not people that Erdoğan can trust, and yet they are the people who are now powerful in the security services around him and in the military,” White told WhoWhatWhy, adding that this could partly explain his recent anti-Western rhetoric. (It would also go a long way toward explaining why so many NATO officers were purged after the failed putsch.)

“He has these constituencies around him that he has to somehow please in order to remain safe, even if there is a ‘Yes’ vote,” White said.

The End of an Era in Istanbul

Days before the referendum, Turkey is tense to the point of paranoia — an April Fools’ Day chocolate ad about a fight between kids was enough to trigger a brief panic about a new coup. Thousands of government opponents are in jail, most critical media have been taken over and ‘No’ campaigners have faced “campaign bans, police interventions, and violent scuffles at their events,” as noted in a recent report by the Organization for Security and Cooperation in Europe (OSCE), an elections watchdog.

Amid widespread demonization and ugly threats of violence, expats and some Turks who are critical of the government, especially intellectuals, are making contingency plans to leave the country. Secular Istanbulites sigh nostalgically about a liberal and diverse era now seemingly coming to an end. One could perhaps compare the mood to that of Vienna in 1938, in the days before the Anschluss, the annexation of Austria by Nazi Germany.

At the same time, the picturesque Istanbul neighborhood of Beşiktaş feels like a bubble of energy and optimism, with the competing referendum campaigns in full swing side by side, and few signs of the intimidation and hostilities reported elsewhere. Two vans, a shiny, new one for the “Yes” campaign and a rust-stained, beat-up-looking one for the “No” campaign, are parked just a dozen or so feet from each other, and take turns playing their respective marches from  loudspeakers.

Dutch MPs from all political groups calling for the release of their imprisoned colleagues in #Turkey pic.twitter.com/lbxRKkxWMd

“No matter what, the ‘Yes’ campaign has already failed,” Özturan said in a gush of optimism, watching the crowd.

He laid out an optimistic scenario for a split in the ruling party that would bring forth a reformist wing which could set things on the right path. But he admits such a fortuitous outcome is a long shot.

When asked to speculate about the chances for a re-birth of democracy in Turkey, Seçkin’s voice cracked slightly.

“I won’t provide you a scenario, but I can tell you what would need to happen,” he said, listing restoration of the rule of law, a reversal of the purges and a new peace push with the Kurds. “This is very crucial, because that bleeding wound is still pre-occupying the country.”

It seems far more likely, unfortunately, that whoever wins in Sunday’s referendum, Turkey will continue to serve as a warning to the rest of the world about the fragility of democratic governance.