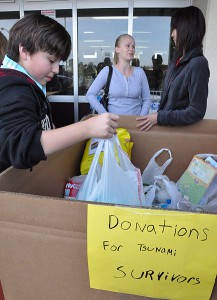 What to Do About Japan—And What Not

Anyone watching the devastation in Japan must certainly wonder what we as individuals should be doing to help. For some insight, we turn to Richard Walden, a most unusual leader of a most unusual humanitarian relief group, called Operation USA. His organization’s efforts are well known to WhoWhatWhy, and they tend to be practical and modest and effective. In a just-published item on Huffington Post, Richard cuts against the conventional mass reaction to a crisis like this. We reprint his remarks here in their entirety:

What We Can Do Now For Japan

The “armies of fundraising”, such as the American Red Cross, slick televangelists and their front organizations claiming to do relief, professional international relief groups and small private groups of concerned Americans wanting to help, are off the mark quickly in the Japan quake-tsunami-radiation disaster.

Efforts ranging from sophisticated internet and text-in-donation appeals, to using paid television and radio programming, to holding “drive-by/drop-offs” at the Rose Bowl in Pasadena, CA, will raise hundreds of millions again as they did for in Haiti. Alas, the long-term results will likely not be much better.

The Japanese Government has (as of early Monday morning Tokyo time) not gone far beyond asking the U.S. Navy and the three USA-based fire department rescue teams to come and help in the rescue operation. Japan has plenty of doctors and nurses, a large pharmaceutical industry, involved corporations, and an efficient, if small, military with modern resources.

As it happened after Kobe in 1995, the Japanese Government and the high-saving Japanese people will lead much of the rescue, relief and recovery effort. International aid beyond the rescue phase will hopefully target overlooked communities — often seniors and non-Japanese resident aliens — as Operation USA did with a modest amount of medical supplies and money in Kobe. The US dollar is close to an all time low against the Japanese Yen so donors’ money won’t go as far as it did in Haiti or in the South Asian Tsunami of 2004.

I urge the donating public to take it slowly and deliberately. Reactive donations only to the American Red Cross or to some televangelist-led group tend not to be the wisest choices. Japan has its own excellent Red Cross health system with hospitals, clinics and much more, most with heavy Japan Government funding.

For you faith-based donors, Japan is Buddhist so you will not be converting Japanese to Jesus anytime soon. Better to carefully sort through relief agencies’ descriptions of what they plan to do over the next month to two years in Japan to help it recover. Look for gaps to fill — a small school or clinic in an out of the way village might need funds or bulk supplies.