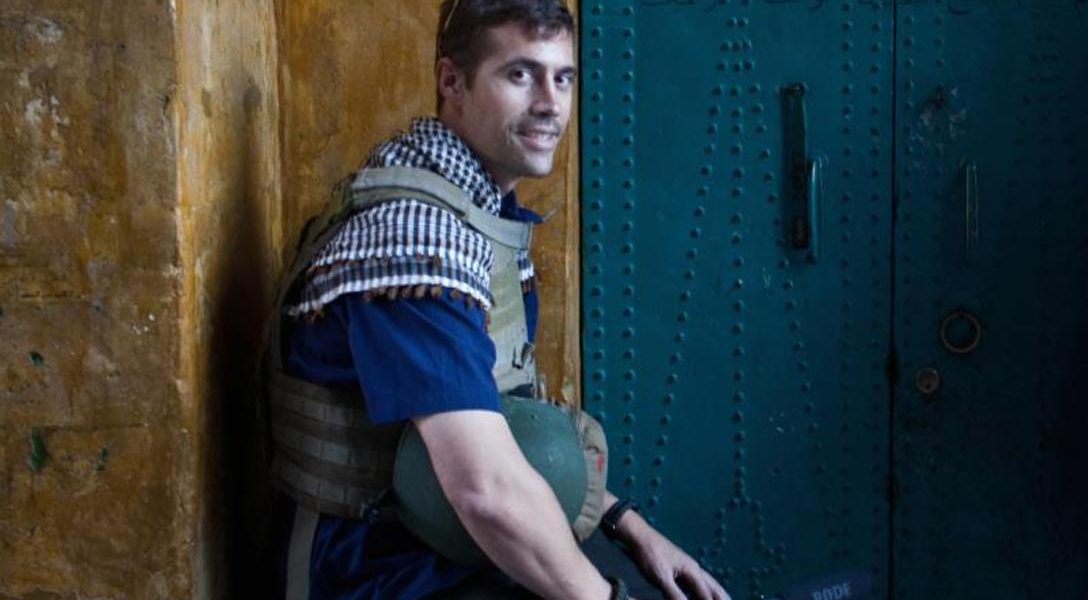 Story Behind Famous Beheading — and What’s Not There

Jim: The James Foley Story  is the saga of a young American, a freelance journalist, whose filmed beheading became an international spectacle.

James Foley came from a fairly ordinary, large American family — solid folks with a comfortable, solid New Hampshire home and existence. He was the restless, questing one, a budding idealist in search of meaning. Foley became a freelance video journalist and writer, and was drawn to dangerous places where news was happening.

He reported from Libya, was captured by government troops, eventually released and made it home, but couldn’t stay put — so he headed to Syria. Luck did not strike twice. He was captured by ISIS on Thanksgiving 2012. And though some of those imprisoned with him were released, he was not. In August, 2014, he was executed.

The documentary, made by Brian Oakes, a childhood friend, explores Foley’s life and his tragic end through those who knew him best.

As promotional materials put it:

JIM: THE JAMES FOLEY STORY tells the story of his life through intimate interviews with his family, friends and fellow journalists — while fellow hostages reveal never-before-heard details of his captivity with a chilling intimacy that reveals their courageous untold story of perseverance. Made with unparalleled access (including footage Foley shot himself), and using carefully rendered, sensitive recreations, Oakes takes viewers deep into the darkness and valor of Jim’s captivity. What emerges is a powerful chronicle of bravery, compassion and pain at the dawn of America’s war with ISIS.

Although a viewer is constantly engaged, the most riveting part of the film is the recounting by his cellmates of how they sustained themselves while in captivity — and still retained their humanity.

Foley is presented as a Jesus figure, rallying the others and elevating their morale. The film draws a kind of parable from the fact that the others survived, while Foley, the strongest and most just of all, was sacrificed.

One thread is the Foley family’s efforts to negotiate his release — and the difficulties they encountered with the US government, which may not have done everything it could, though there may not have been much it could do.

His captors, aware that one of Foley’s brothers is in the Air Force, blamed Foley for the deaths and destruction caused by the aerial bombardment the US unleashed in its war on ISIS, and elsewhere in the Middle East. This serves to remind us that no one has clean hands in the circle of violence engulfing that region— but the filmmakers do not dwell on the point.

In fact, during the Q&A after the screening at the Sundance Film Festival, the director mentioned that he did not intend a “political” film. That’s a theme I heard, again and again, at the festival. The director said he hoped people would still find reason to watch his film ten years from now. “ISIS could be gone in six months,” he said. If only, I thought.

Foley’s parents have started a charitable foundation — a common theme. When something horrible happens to a family or a person, there’s an understandable need to try to salvage some meaning from the horror. The Foleys’ foundation has three objectives: protect journalists, help hostage families, and help disadvantaged kids, a particular interest of Jim Foley’s.

One theme in this film that especially resonated with me: the desire for adventure, the addiction to adrenaline that characterizes war reporters and others who seek out dangerous situations. Having been in several conflict zones, I too felt the chemical high.

Jim Foley said he wanted to “tell their story.” But whose story? In the end, much of what journalists see is anecdotal. If you’re embedded with one side, you tend to identify with that side — which for Foley was the pre-ISIS opposition to Assad. And even the foot soldiers you report on may not know the real story — they may very likely be manipulated as part of a larger conflict they know little of.

The film implies that, somehow, the opposition to Assad’s brutal regime morphed into the bestiality of ISIS. But it doesn’t explain how — or what we can learn from this.

It tells us essentially nothing about the role of colonialism and the scramble for fossil fuels that lies behind these conflicts. There’s little connection made between the comfortable lives we take for granted in the West— and the no-holds-barred efforts to extract resources like oil from places like Syria and Iraq and Libya.

Still,having intrepid reporters like Jim Foley “out there,” in complex, violent situations, is essential.  We owe a great debt to those who risk their lives to shine a light on distant conflicts in which our countries are deeply involved. Journalists, as the film says, are indispensable. They’re how we know things.

Whatever you think of the conflict in Syria and Libya,  this is a film of considerable grace and beauty. No one can watch it, I believe, and not be moved by the nobility of purpose that propelled Jim Foley to a distant battlefield in search of a story that he felt needed to be told.

The film does not delve deeply into the forces and factors that gave rise to ISIS — and any implications that might point back at Washington. It’s not that outfits like HBO and Showtime would always shy away from such fare, but in general they do.

True controversy that angers the public — and the military-industrial complex —

is frowned upon as bad for business.

While Jim: The James Foley Story omits the famous execution video, there is some minimal yet horrifying footage of civilian casualties. But what sticks in the mind is the incredible humanity of the core character.

You do not, unfortunately, come away any wiser as to why this singular human being had to die. Or why so many others must as well.

Be sure to see WhoWhatWhy’s inquiries into Syria, Libya, and other conflicts.