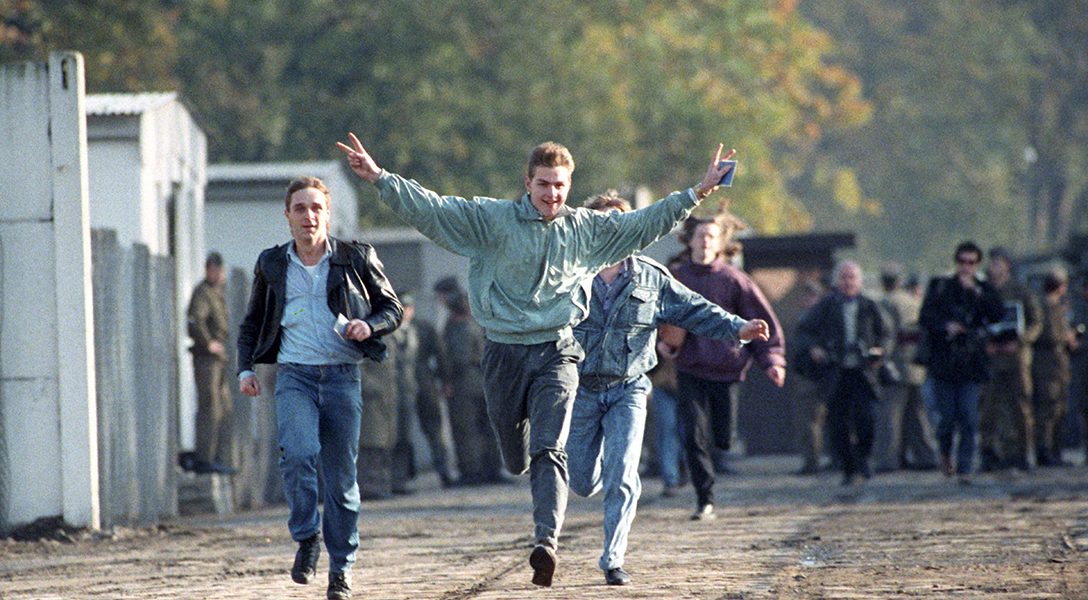 Russ Baker’s Firsthand Account of the Fall of the Wall

Today marks the 30th anniversary of the fall of the Berlin Wall. The day has special meaning for me, as I was in Germany at the time at the start of my career as a reporter.

As I look back, I can’t help but think of the symbolism of walls over the years — with some countries tearing them down, and others eager to build them — and the impact of uniting and separating families. Need I say more?

Here’s a short dispatch, an eyewitness account I filed at the time for the Christian Science Monitor — in the thrilling days of ferment and uncertainty before the East German government abdicated and the Wall was demolished

”Over the Border in Search of Kin”

Highlight: The Hofmeisters join hundreds of thousands of families seeking relatives in West.

“Wolfgang! It is not possible!” Anneliese Thone yelled from her third-floor apartment window.

Standing below on the sidewalk were her nephew, Wolfgang Hofmeister, his daughter Anke, 13, and son Henrik, 11. Hofmeister’s aunt was astonished when she looked out her window to see who was ringing the bell.

It was the first time out from behind the Iron Curtain for Hofmeister and his children. He had tried to call first, but the telephone lines were jammed as thousands of East Germans attempted to reach their families in the West to say: Here we come.

While the dramatic early story was of East Germans crossing through the Berlin Wall, by the weekend a more broad-based transit was developing along the countries’ border. At four crossing points — Helmstedt, Lubeck, Herleshausen, and Hirschberg-Rudolphstein — hundreds of thousands of people, packed into old East German Trabant and Wartburg autos, waited patiently for their chance to spread through the highways and country roads of the West in search of relatives.

Hofmeister left his home in Genthin, in the western part of East Germany, at 3 AM Saturday. He drove in the direction of Bielefeld, relying on an atlas from his school days. Because of the backup of cars — 35 miles at noon — the three-hour trip took 14 hours.

Near Bielefeld, in the state of North Rhine-Westphalia, Hofmeister pulled off the road to get directions from West German police.

Hofmeister beamed, and the policeman grinned broadly as he pointed to a map. The children excitedly followed the conversation, memorizing the details of a field trip they would never forget.

Hofmeister remarked on the joviality of the West German police.

“I’ve never experienced a friendly policeman before,” he said.

The normally dour and severe East German police, too, were amiable and pleasant that day as they assisted departing countrymen.

Inside the aunt’s apartment, there was much hugging, as Frau Thone sat and gazed at her relatives, choked up and nearly beyond words.

All over West Germany, this scene repeated itself. On the highways, speedy Westerners became used to slamming on their brakes for the slow-moving East German vehicles, most easily identifiable for their box-like shapes and unfashionable colors.

The East German vehicles drove through the cities and towns, their passengers marveling at the opulence of the West German lifestyle and the vibrancy of the streets.

Frau Thone phoned another relative, where Hofmeister’s wife, who had entered days earlier, was staying. While his wife had applied many months earlier for a hard-to-obtain visa, her husband and children, under the newly relaxed transit rules, had simply presented their identity cards and been waved through.

At the same time that the West Germans were reveling in the new freedom of their eastern cousins, there was concern over the ability to absorb large numbers of East Germans into their economic and housing infrastructure, should they opt to stay.

“Where shall we put all these people, with our housing crisis and unemployment rate?” Frau Thone asked.

Many of the East Germans said they were there for a visit and a look around, but were not planning to emigrate. If so, East German leader Egon Krenz’s gamble with open borders as a means of halting the population loss may be working.

As for Hofmeister, he said that after spending the night, he planned to drive back to the East. He had to be at work by 7:30 a.m. Monday, and the children had school. Hofmeister was able to take them to the West on Saturday, ordinarily a school day, because classes were canceled on account of a malfunctioning radiator.

Hofmeister said he thought someone had perhaps “helped” the radiator not to work, enabling families to participate in this historic event.