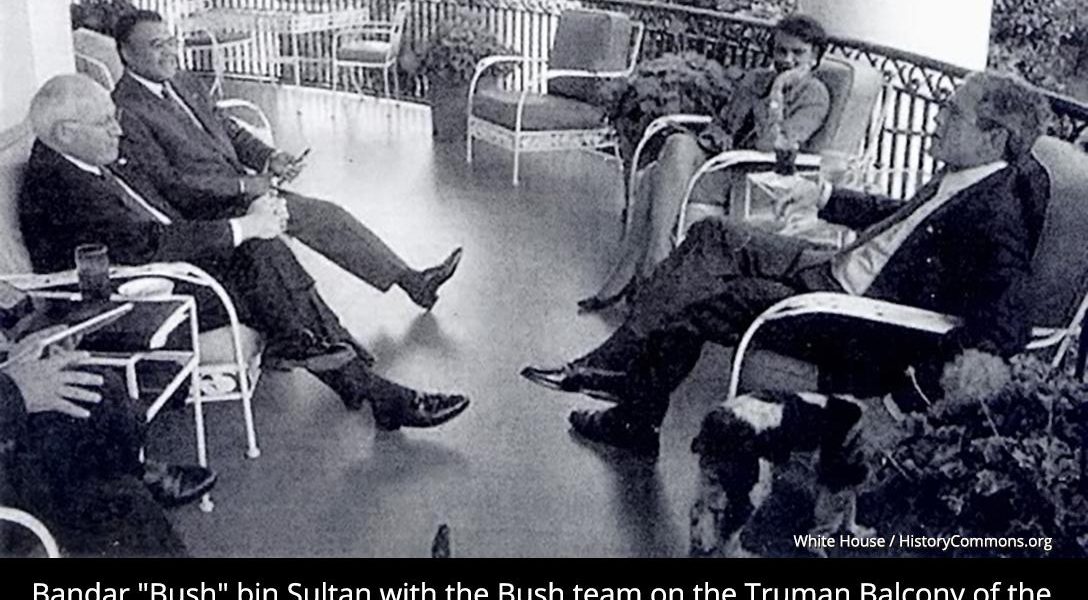 Some people view the release of the infamous “28 Pages” on the involvement of Saudi Arabia in the attacks of September 11, 2001 as the end of a process. But WhoWhatWhy’s Editor-in-Chief Russ Baker points out that the new section raises more questions than it answers.

Watch Russ discuss the 28 Pages and shed light on what they do not reveal.

These days the conspiracy theory factories, large and self-sustaining for those of us that like to question beyond the mainstream media spoon-fed narrative, this is a good thing. Of course, certain of those among us will get stuck over in the deep end of the conspiracy whirlpool, but that doesn’t rob those of us with more sober minds of our legitimate concerns and doubts, take 9/11 for example. Conspiracies from all ends of the spectrum surround the events of 9/11, but you don’t have to think that the whole event was set up by the Bush Administration to know that something fishy was going on in the back halls of power. Why is that? Well, take for example the recently released 28 pages; redacted until just this year and now available to the public. Among other things, the 28 pages seem to suggest suspicious Saudi royal family links with some of the hijackers. Recently Sean Stone sat down with the founder of whowhatwhy.org, an expert on 9/11: Russ Baker. Sean first asked him if the CIA was also on the trail of the hijackers and how the 28 pages relate to that agency’s operations back in the early 2000s. Let’s take a listen.

Russ Baker: My sense after years of following this story and after our site Whowhatwhy, breaking another piece of it about the Sarasota, Florida connection, again to the Saudi royal family with the hijackers, I think there are layers and layers and layers of this thing. It’s very, very complicated and I do think that there is a larger game in play that will explain why the US government is so determined that we not understand the full scope of what took place.

Interviewer: Absolutely. But let’s start with what has been divulged from the 28 pages. Obviously it focuses only on the San Diego side and San Diego cell of the hijackers, doesn’t get into Florida and other locations, but what do we now know that we did not know before those 28 pages were declassified?

Russ Baker: Well, some of this had already been out a bit. What’s interesting, I mean here’s the basic background, if I may quickly sketch it. You had a Congressional Inquiry following the 9/11 attacks. You also had the so-called Official 9/11 Inquiry. The Congressional Inquiry is the one we’re talking about. They produced a report, about 28 pages of that report were entirely redacted, and those pages dealt with information that the panel saw related to connections between the Saudi royal family and the hijackers via some individuals, two in particular who you mentioned who are Bayoumi and Basnan, who appeared to have been some kind of Saudi intelligence officers, so that’s that report. There was a second report, the so-called Official 9/11 Report, which supposedly references some of the same material but did not get anywhere as far in terms of talking about the Saudi connection. Over the years, the Congressional Inquiry had been prevented from releasing those 28 pages, and former Senator Bob Graham, who had been the chairman of the Senate Intelligence Committee, has for years been pushing for those pages to be released and finally we saw several weeks ago the release of these documents. What’s interesting is they released them on a Friday, of course when everybody was heading off on their holiday break, and as many, many other stories were coming out, it did not get the kind of attention that it warranted. And what’s so astonishing about those 28 pages, and by the way, Sean, as you pointed out, even those now released 28 pages were still redacted further. If you look at it, you’ll see big sections blotted out, and on our site Whowhatwhy, you can go there, read an article about this and we have links so you could see the redactions. But in any case, even with those redactions, you can see very clearly that the Commission was under the impression that these two individuals were in fact Saudi intelligence officers. They had direct connections to several of the 9/11 hijackers, principally the first two to arrive in the United States. In one case actually, picking him or them up at the airport, getting them situated with housing, supplying them with funds and other logistical support. Also, very, very significantly, Prince Bandar, who was the Saudi Ambassador to the United States under George W. Bush, was very close with the Bush family, so close that Barbara Bush dubbed him Bandar Bush. There’s that famous photo of him and George W. Bush sitting on a balcony of the White House smoking cigars together. Extremely close. That Bandar Bush and his wife personally provided financial support to the hijackers via this San Diego operation that you’re talking about. So this is of course, there’s no way around it, but this is one of the most profound discoveries on one of the most profound news events of the last century or so. And it appears that the Saudi royal family, one of the US’s most steadfast and most important allies, may have funded and aided and perhaps even planned the attack on the United States on 9/11. And so of course this is enormously important. Now, what you’re raising, I think very correctly, is this other issue that Richard Clark is putting into play, that maybe there was more to this story. Because if in fact the Saudis were behind this, how come the US didn’t go after them and this never came out? What we see continuously is cover-ups by the Justice Department, by the CIA, by the FBI, by the State Department, what are they covering up? And I’m hoping that today, you and I can talk a little bit about that; of the possibility that like a lot of intelligence operations, there were multiple layers and there were perhaps cells and efforts going on that other people were not aware of, where you had people actually trying to ride this operation to see where it was going, I suppose with the idea of stopping it. And then you have to ask yourself, well, if they had that information, why didn’t they stop it?

Interviewer: Right. So obviously you mentioned Bandar providing financing to these hijackers, – well, future hijackers at the time – but they were known as al-Qaeda operatives at that point and Richard Clark’s article points out that because there’s a relationship between a Saudi official, al-Bayoumi and these al-Qaeda operatives, he believes that there could have been a CIA element actually monitoring this and that’s why the CIA did not alert the FBI of the presence of al-Qaeda operatives inside the United States. So do you believe this is a credible explanation?

Russ Baker: I do. I have always suspected that there was more going on here and of course, what we don’t see very often in the media is a sophisticated analysis of the rivalries between these different agencies, their failures to cooperate, which are always chalked up to sort of archaic computer systems or something, but it’s nothing of the sort. They’re really just rivals. Both of these agencies are extremely opaque. We know really very little about what they do and why and who really makes the strategic decisions within them and I don’t doubt at all that elements within the CIA certainly had the sophistication to monitor these people. It seems almost impossible that al-Bayoumi and Basnan could have entered the United States and did what they did and interacted with the individuals that they did, and as you pointed out having the al-Qaeda ties, having the ties and the interactions with key people within the Saudi royal family. They were in contact with the Saudi embassy, consulates and so forth. All of these entities are constantly being monitored and so it seems almost impossible that the CIA would not have known that something was afoot. Now, if we go and we look at Florida, where we see other members of the 9/11 terrorist cell, we again see them interacting with all kinds of people. We see pretty good evidence that the CIA was aware of this. The airfield near Sarasota, where a number of them trained. This family that we wrote about at Whowhatwhy, this family in Sarasota that owned a home in an affluent gated community there. The man who owned the home was the CEO of a company whose chairman was the head of Saudi aviation. And his father, the father of the man who owned this company has since 9/11 become the King of Saudi Arabia. So what you’re looking at is the family of the people who actually run the country right now in direct contact with these hijackers, you see CIA all over it, you see a possibly CIA drug operations and weapons operations running out of the same airfields in South Florida. So I think this is a story that is going to keep on giving. It’s a big, big story that begins to allow us to get a glimpse into what you might call the shadow government, this wholly unaccountable entity within our own government that I think the president frankly understands almost nothing about.