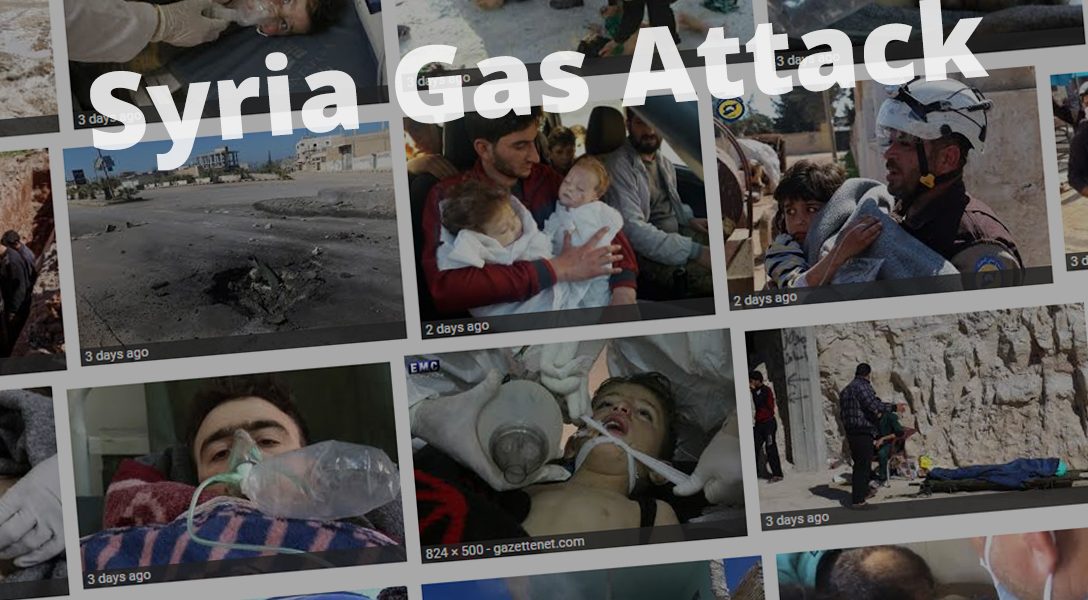 Rush to Judgment in Syria?

The images are simply horrifying: blue-lipped children lying side by side with their bodies twisted grotesquely from neural spasms; a disconsolate father clutching his two dead babies, their faces blue from poisoning — just a few of the more than 70 victims of what just about everyone agrees was an atrocious chemical attack that took place in the Syrian town of Khan Sheikhoun on Tuesday.

Much of the available evidence points toward the regime of Syrian President Bashar al-Assad as the perpetrator. Yet — all the more so after the swift and unexpected US military escalation which Russian Prime Minister Dmitry Medvedev said had come “one step away from military clashes with Russia” (and amid fears that more could be on the table) — the duty of journalists is to look for the facts behind official narratives. That’s a major headache in Syria: especially in a town controlled by an assortment of rebels with varying degrees of linkage to al-Qaeda, where few Western journalists can even dream of setting foot.

We’ve managed to poke some holes into the official narratives of the Syrian and Russian governments, which insist that the gases came from a rebel chemical weapons depot.  Yet there are also major unanswered questions about the narrative of the Trump administration, which claims the Syrian target it bombed Thursday night was the airbase where the chemical attack originated. These questions urgently demand due diligence.

The problem of access has long plagued Western media in places like Syria: Since approximately 2013, in Syria’s case, it has been too dangerous for even the most intrepid foreign correspondents to reside in the country. Outlets have even stopped accepting stories pitched from the ground by journalists who are not locals. (They have done so out of ethical principles and in the hope of discouraging reporters from taking unreasonable risks.)

This has resulted in the main sources of information being local activists either directly linked to the rebels or working under immense pressure from al-Qaeda-linked groups. Case in point: one of the Syrian doctors on the ground who appeared in Western media reports of Tuesday’s chemical attack was investigated on terror charges in Britain in 2013.  Thus it is often impossible to separate fact from fiction, and this has dangerously reduced Western media’s standards of objectivity.

Among the more easily disprovable claims of the Syrian government, widely reported in the Russian media, has been the assertion that the Su-22 bomber plane used in the attack, a vintage Soviet model, cannot carry chemical weapons.

But there is little argument that a Su-22 bombed Khan Sheikhoun on Tuesday. Western media reported as much, too. And experts say that not only can the Su-22 carry chemical bombs, it has been used in chemical weapons attacks in the past.

“[The] Iraqi air force used [the] Su-22 Fitter, among others, to deliver chemical bombs against Iranian troops during the 1980-1988 Iran-Iraq War,” Raymond Zilinskas — a weapons of mass destruction expert at the James Martin Center for Nonproliferation Studies at the Middlebury Institute of International Studies — told WhoWhatWhy.

It’s circumstantial evidence — but that’s about as good as we can get from Syria these days, and that in itself is a major point to consider when debating whether or not to launch another major Middle Eastern war. There is also the issue of motive — why would Assad gas the rebels at a time when he’s widely perceived as winning the war on the ground and was on the verge of being grudgingly recognized, for the first time in years, as Syria’s legitimate ruler? As the outrage and the military response to the attack show, such a move could cost him both of these achievements. So surely there must be more to it than the claim, widely repeated by mainstream media, that he was “testing” Trump.

In the way of circumstantial counter-evidence, media activists embedded with the rebels have claimed — a day prior to the attack — that they were about to kick off an information campaign about the use of toxic substances against civilians in the very same area, on the very same day that the attack occurred (in Arabic).

Tuesday’s chemical attack was neither the first nor the worst to date in the brutal civil war which has claimed upwards of 400,000 lives in the past six years. The most infamous was the one that took place in 2013 near Damascus, which killed over 1,000 people and forced former President Obama to trip over his “red line” warning.

Even that attack, which resulted in the Syrian government shipping out its entire declared supply of chemical weapons for destruction, continues to generate controversy. In a 2014 investigation, Pulitzer Prize-winning reporter Seymour Hersh suggested that it was in fact NATO’s second largest force, Turkey, that had conspired with extremists among the rebels to stage the attack in order to frame Assad.

Today Turkey, which in recent months has carved out a small buffer zone in northern Syria, at times in the face of joint opposition from Russia and the US, again finds itself at a critical junction. The renowned Turkish journalist Amberin Zaman argued recently that Turkey’s entire relationship with Russia may hinge on Trump’s reaction to the attack.

“I want to express that we find this positive as a step against the al-Assad regime’s war crimes committed with chemical and conventional weapons,” Turkey’s President Recep Tayyip Erdogan said shortly after the US missile strike, calling for further military steps leading to Assad’s ouster.

“But is it enough? I don’t see it as being enough,” he added.

More than a decade ago, the US invaded Iraq on trumped-up WMD charges. It took many months for the truth behind those claims to emerge. Today, as the Trump administration apparently finds itself at a similar crossroads, one thing is certain: the many unanswered questions about Tuesday’s attack call for a thorough investigation.