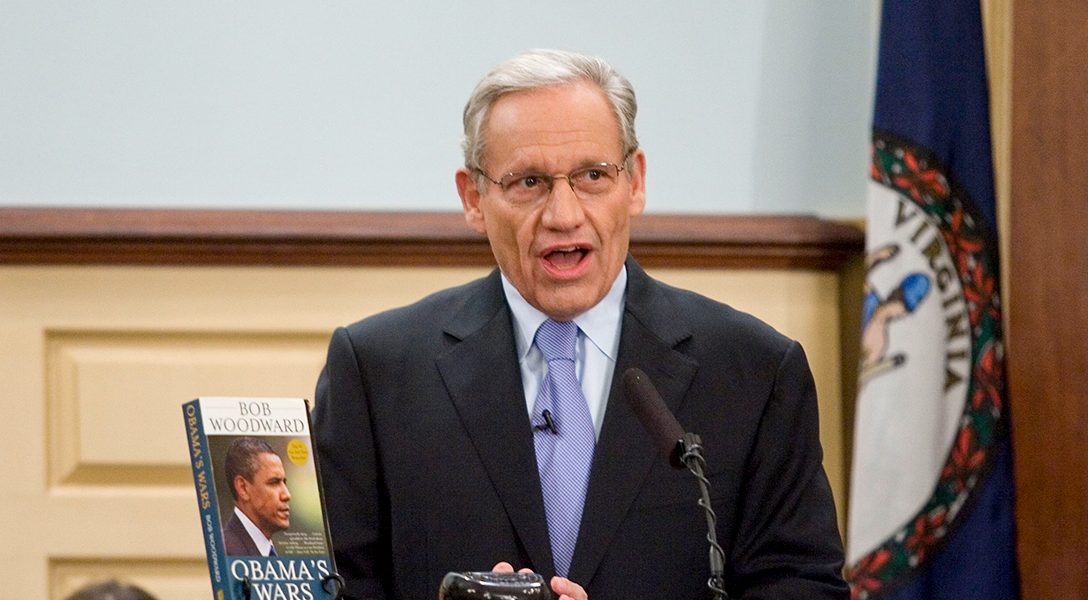 Just one year before the publication of “Obama’s Wars,” Bob Woodward became a player in his own book-in-progress. He morphed into his true identity: Warrior Bob. Actually, there’s an even deeper persona, Agent Woodward—but we’re getting ahead of ourselves.

In June of 2009, Woodward traveled to Afghanistan with General Jim Jones, President Obama’s National Security adviser, to meet with General Stanley McChrystal, then the commander of forces there. Why did Jones allow this journalist to accompany him? Because Jones knew that Woodward could be counted on to deliver the company line—the military line. In fact, Jones was essentially Woodward’s patron.

The New Republic‘s Gabriel Sherman wrote at the time that

…Jones was a guest of Woodward at his wife Elsa Walsh’s fiftieth birthday party held at Sally Quinn and Ben Bradlee’s house. He and Elsa were glued to Jones at the cocktail party before the dinner started…

In September of last year, McChrystal (or someone close to him) leaked to Woodward a document that essentially forced President Obama’s hand. Obama wanted time to consider all options on what to do about Afghanistan. But the leak, publicizing the military’s “confidential” assertion that a troop increase was essential, cast the die, and Obama had to go along. Nobody was happier than the Pentagon—and, it should be said, its allies in the vast military contracting establishment.

The website Firedoglake chronicled the developments in a pungent essay:

Apparently General McChrystal and the Petraeus cabal aren’t willing to wait for their Commander in Chief to set the strategy. Prior to the President’s interviews, McChrystal’s people were already telling journalists that they were “impatient with Obama” as Nancy Youssef reported. This “Power Play,” as I mentioned last night, included a veiled threat that McChrystal would resign if he didn’t get his way.

And sure enough, just hours after the Commander in Chief was on the airwaves, somehow McChrystal’s classified report hit the Washington Post … compliments of Bob Woodward no less.

Wow, what a coincidence!

This episode highlights a crucial aspect of Bob Woodward’s career that has been ignored by most of the media. Simply put, Woodward is the military’s man, and always has been.

For almost four decades, under cover of his supposedly “objective” reporting, Woodward has represented the viewpoints of the military and intelligence establishments. Often he has done so in the context of complex inside maneuvering of which he gives his readers little clue. He did it with the book Veil, about CIA director William Casey, in which he relied on Admiral Bobby Ray Inman, a rival of Casey’s, as his key source. (Inman, from Texas, was closely identified with the Bush faction of the CIA.) The book was based in part on a “deathbed interview” with Casey that Casey’s widow and former CIA guards said never took place.

Typically, Woodward uses information he gets from his main sources to gain access to others. He then gets more secrets from them, and so on down the line.  His stature—if that’s the word—as a repository of this inside dope has been key to the relentless success machine that his media colleagues have perpetuated. The New York Times review of his Obama book laid out the formula:

In Obama’s Wars, Mr. Woodward, as usual, eschews analysis and commentary. Instead, he hews to his I Am a Tape Recorder technique, using his insider access to give readers interested in inside-the-Beltway politics lots of granular detail harvested from interviews conducted on background, as well as leaked memos, meeting notes and other documents. Some of this information is revealing about the interplay of personality and policy and politics in Washington; some of it is just self-serving spin. As he’s done in his earlier books, Mr. Woodward acknowledges that attributions of thoughts, conclusions or feelings to a person were in some cases not obtained directly from that person, but from notes or from a colleague whom the person told— a questionable but increasingly popular method, which means the reader should take the reconstructed scenes with a grain of salt.

And then, thanks to all this attention, and even with that grain of salt, the book went to #1.

But might there be more to Woodward and his oeuvre than just questionable work practices? Well, let’s see. Woodward granted former CIA director George H.W. Bush a pass by excluding him from accounts of Iran-Contra, which occurred while the notorious intriguer was vice president under the notoriously hands-off Ronald Reagan. (When I asked Woodward about this for my book Family of Secrets, he replied, “Bush was…What was it he said at the time? I was out of the loop?”) Later Woodward got exclusive access to H.W.’s son. He spent more time with George W. Bush than did any other journalist, writing several largely sympathetic books about his handling of Iraq and Afghanistan before playing catch-up with prevailing sentiment and essentially reversing course.

Now, for a bit of cognitive dissonance. Woodward’s signature achievement - bringing down Richard Nixon - turns out not to be what we all thought. If that comes as a surprise, you have missed a few books, including bestsellers, that put pieces of this puzzle together. (Family of Secrets has several chapters on the real Watergate story, but there are others that present detailed information, including those by Len Colodny and Robert Gettlin, James Rosen, Jim Hougan and others.)

Here’s the deal: Bob, top secret Naval officer, gets sent to work in the Nixon White House while still on military duty. Then, with no journalistic credentials to speak of, and with a boost from White House staffers, he lands a job at the Washington Post.  Not long thereafter he starts to take down Richard Nixon. Meanwhile, Woodward’s military bosses are running a spy ring inside the White House that is monitoring Nixon and Kissinger’s secret negotiations with America’s enemies (China, Soviet Union, etc), stealing documents and funneling them back to the Joint Chiefs of Staff. They then give what they stole to columnist Jack Anderson and others in the press.

That’s not the iconic Woodward of legend, of course—so it takes a while for this notion to settle in the mind.  But there’s more—and it’s even more troubling. Did you know there was really no Deep Throat, that the Mark Felt story was conjured up as yet another layer of cover in what became a daisy chain of disinformation? Did you know that Richard Nixon was loathed and feared by the military brass, that they and their allies were desperate to get Nixon out and halt his rapprochement with the Communists?  That a bunch of operatives with direct or indirect CIA/military connections, from E. Howard Hunt to Alexander Butterfield to John Dean—wormed their way into key White House posts, and started up the Keystone Kops operations that would be laid at Nixon’s office door?

Believe me, I understand. It sounds like the “conspiracy theory” stuff that we have been trained to dismiss. But I’ve just spent five years on a heavily documented forensic dig into this missing strata of American history, and I myself have had to come to terms with the enormous gap between reality and the “reality” presented by the media and various establishment gatekeepers who tell us what’s what.

Given this complicity, it’s no surprise that when it comes to Woodward’s latest work, the myth-making machine is on auto pilot. The public, of course, will end up as confused and manipulated as ever. And so things will continue, same as they ever were. Endless war, no substantive reforms. Unless we wake up to our own victimhood.