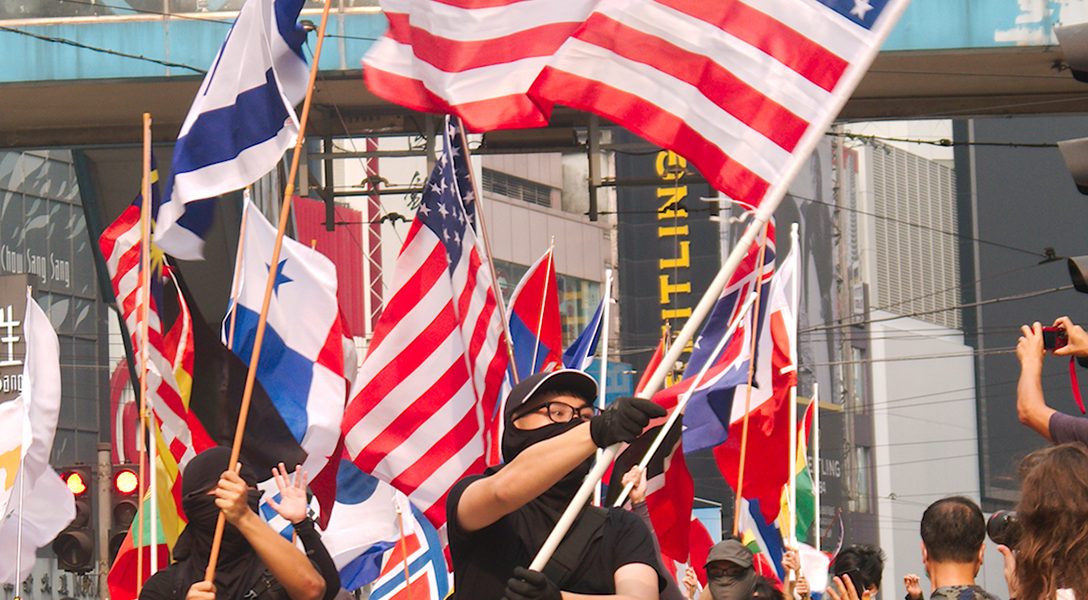 The Stars and Stripes is the symbol of freedom for Hong Kong protesters. Photo credit: Stuart Heaver / WhoWhatWhy

HONG KONG — Standing amidst the burned-out barricades, graffiti-strewn walls, abandoned umbrellas and expended tear-gas shells, an old man with a long white beard accosts me on the  street in the densely populated district of Wan Chai.

A street battle between police and protesters has recently passed through, and the air is still bitter with the odor of tear gas.

“Please tell the president of the US and leader of the Western world that Hong Kong people are looking to him to use his power to boycott China,” says Wah Ho, who gives his age as 77 years and says he supports the youngsters standing up to Beijing.

Ho, like most people in Hong Kong, was not celebrating the much-vaunted 70th anniversary of the People’s Republic of China (PRC). In fact, over the recent days of intense protests and increasingly violent clashes, the US national flag has been almost as prevalent as the Chinese flag.

Blood on the streets of Hong Kong is nothing new, but the shooting with a live round of a teenage protester by an armed riot police officer during widespread protests raises the stakes of this crisis, and pro-democracy protesters are increasingly looking to the US for support.

“My message to President Trump is pass the act — please pass the act,” says Kei-ko Pun, a masked female protester, referring to the Hong Kong Human Rights and Democracy Act, making its way through Congress. Currently, Trump does not appear to be listening. In a tweet, that even made Republicans wince, the president cheerfully congratulated President Xi on the 70th anniversary.

Congratulations to President Xi and the Chinese people on the 70th Anniversary of the People’s Republic of China!

“There are no regulations in place to restrain the police or the government. By passing the act there will be some limitations in place to dissuade them from using excessive force,” she says, reflecting a widespread sentiment that the once-respected Hong Kong Police Force is out of control and acting with direct authority from Beijing.

An online video appears to capture the moment when a teenage male, who swung an object at a police officer in riot gear, was shot in the chest at close range by that officer in Tsuen Wan, in the western New Territories of Hong Kong. The use of firearms by police is extremely rare in Hong Kong, and citizens are still dealing with the shock as the victim, a high school student, remains in a critical condition.

The authorities hoped to avoid any high profile conflict by putting the city in lockdown. They have closed shopping malls, shut down 25 MTR railway stations, and issued a special warning via mobile phone to all citizens of “severe disruptions.” Nothing would be allowed to tarnish the glittering national celebrations on the mainland or embarrass Beijing.

Of course, Hong Kong’s battle-hardened pro-democracy demonstrators had other ideas, and were determined to spoil the birthday party and exploit an opportunity to draw maximum international attention to their cause. Many in Hong Kong were predicting a riot and they were proved correct.

Tuesday’s shooting may prove to be a game changer, and its impact will not be mitigated by the fact that the city’s chief executive, Carrie Lam, was enjoying lavish hospitality and patriotic pageantry in Beijing while chaos played out in the city she is supposed to be running. She could consider finally standing down, but now the gesture would be meaningless.

“It makes no difference if Carrie Lam goes, the CCP [Chinese Communist Party] controls the government now,” says Candice Wong, another masked female protester who is carrying a large US flag. “Hong Kong is in a critical situation.”

“I am holding this flag because I support the core values of the USA — liberty, freedom of speech, and democracy,” she says. “We want those values to apply here in Hong Kong.”

The Stars and Stripes were out in force during Sunday’s anti-totalitarian march, which attracted tens of thousands of protesters, and Tuesday’s march of mourning to mark the 70th anniversary of the PRC. Freedom of assembly is guaranteed by the Basic Law, Hong Kong’s mini-constitution, but because the police refused to issue a letter of no objection, both marches were deemed an illegal activity, prompting many arrests. It did not deter thousands of protesters, all prepared to risk imprisonment.

Are a Million Uighur Muslims Being Held in Camps in China?

By late afternoon on both days, some of the busiest and most densely populated areas of central Hong Kong convulsed by mayhem, swathed in tear gas as peaceful protesters, journalists, ordinary residents and tourists all found themselves caught up in the violent street clashes. Anyone not fortunate enough to have an industrial-grade anti-gas respirator was reduced to painful tears.

Carrying the US flag on pro-democracy protests initially attracted criticism from many quarters. First it infuriated Beijing, which regards it as an act of gross treachery. Secondly, pro-democracy sympathizers say it plays into Beijing’s unsubstantiated narrative that the protests were orchestrated by the “black hand” of hostile Western powers, widely believed to be a euphemism for the CIA. Presumably, though, if skilled CIA operatives were sponsoring protesters in Hong Kong in order to covertly destabilize China, they wouldn’t ask them to advertise the fact by carrying the Stars and Stripes.

Protesters insist the flag represents the core Western liberal values they crave and helps to internationalize their cause so that Beijing can’t crush it in private. There were many other international flags being waved over the past few days, but the Stars and Stripes was predominant.

Lewis Fung is older than most of the protesters and describes himself as an office worker. Carrying the US flag aloft, he doesn’t have the profile of a typical urban agitator.

“I only want to give thanks to the USA for helping Hong Kong and to defend freedom and democracy,” he says. Unimpressed by President Xi’s National Day reaffirmation of the “one country, two systems” principle, he, like many, regards the US as Hong Kong’s last hope to challenge the threat to democracy posed by Beijing.

As another US-flag-carrying protester, who declined to give his name, put it: “Only the US can stand up to China.”