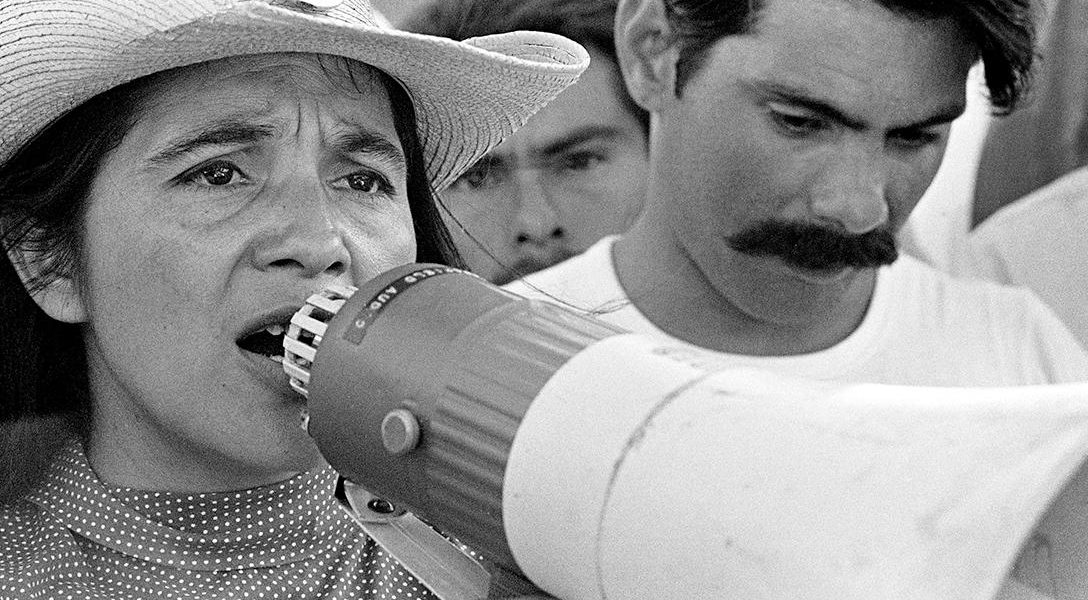 Food for Thought: Trump, Mexicans, and an Underappreciated Heroine

If you eat in the United States, it’s likely that a person of Mexican heritage touched your food — brought it out from the earth at great physical expense and very modest recompense.

I grew up in California, and pretty much everyone seemed to know about this. We knew that the people working, often out of sight — in warehouses, in kitchens, and in the fields where the state’s great bounty grew — were largely Mexican. Nobody thought about Mexicans “invading” — we thought of them as an integral part of our lives. And we knew they were in this land, as a people, before “we” ever got here.

We also knew that the field workers were treated badly and paid little. We knew this because of a highly effective campaign carried out by an extraordinary union — the United Farm Workers, or UFW, founded by César Chávez and Dolores Huerta.

When I was a kid, a lot of people I knew, including my family, went for years without eating grapes, or lettuce, or at least non-union lettuce, because we wanted to support this just cause of an honest wage for back-breaking work. And we were thrilled to see that, against all odds, after fits and starts, the movement ended up triumphing.

Its nonviolent tactics back in the 1970s forced California and Florida growers to recognize the UFW as the bargaining agent for 50,000 field workers. (Go here for more information on the UFW.) The memories of all this came flooding back to me in response to the anger currently being whipped up against Mexican-Americans, including those in a whole range of immigration statuses, in the Age of Trump, who has referred to them as “rapists” or some combination of “bad hombres” and “lower-skilled workers with less education who compete directly against vulnerable American workers.”

Yet pretty much everyone knew back then, as they know today, that very, very few Americans — even the unemployed — are willing to take those jobs in the fields.

And there lay the potential to improve the workers’ miserable lot: Pushing back against the farm owners. That was what the UFW did.

Back when I was a kid, we saw and heard all the time about the head of the union, César Chávez, the handsome, short-statured, dark-skinned Mexican “indio” with the outward demeanor of a Gandhi, leading hundreds, then thousands of farmworkers in peaceful protest.

Because I followed the doings of the UFW (and even as a kid helped pass out flyers in front of supermarkets urging people to boycott non-union produce) I knew there was another “star” in the picture.

I’d heard of Dolores Huerta, co-founder of the union with Chávez. Watching her whip up audiences with gusto, I got a whiff of her powerful charisma. But I noticed that in the ensuing years, Chávez has posthumously risen to virtual deity status — while Huerta, very much alive, remains a largely obscure figure with the general public.

For proof of the credit gap, google “Cesar Chavez” — and you will find countless monuments of sorts to him, including  parks, major streets, libraries and more. Not so, Huerta.

The Fox News blowhard Bill O’Reilly underlined Huerta’s challenge by announcing on his program that he had never heard of her. He didn’t mean to say that she deserved more attention, either.

When she appeared on O’Reilly’s show in May of 2006, her host was overbearing, condescending, and supercilious. He would ask Huerta a question, then butt in to make her views seem more extreme. “Republicans hate Latinos” became “All Republicans hate Latinos.” She tried to explain that so many of the laws they promoted hurt the Latino community, for instance, doing away with affirmative action, but O’Reilly quickly twisted that into a discussion about borders.

He asked her to explain the meaning of her statement, “We didn’t cross the border, the border crossed us.” She tried to give him a historical viewpoint, that indigenous people have always moved freely on this continent, but O’Reilly swooped in to stuff words in her mouth:.”You don’t believe the United States has a sovereign right to regulate who comes here and who doesn’t.” She responded, “I don’t believe I said that. You’re saying that. I didn’t say that.”

Huerta has had worse treatment. In 1988 she was nearly beaten to death by the San Francisco police at a protest rally. She had been distributing grape boycott literature to a crowd outside the hotel where then-Vice-President George H.W. Bush was making a speech. The police asked the protesters to move and, according to the mayor, Art Agnos, they did. “We could see she was being very cooperative. We could even read her lips, saying ‘I’m moving.’” But the police beat the 5’2”, 110-pound grandmother, breaking several ribs and rupturing her spleen.

I always wondered why she remained in César Chávez’s shadow. Was this just the all-too-common sexism, or was there more to it? Why was this bold, inspiring woman not given equal billing? And what was her story that was not being told?

Apparently I wasn’t the only one who felt that way. Over the years, any number of people pushed for Dolores Huerta’s moment. And now it has come — in a new documentary, Dolores.

It came about when the iconic musician Carlos Santana, who brought a Latin American inflection to rock music, heard someone say there ought to be a film about her. He agreed, and recruited the director and screenwriter Peter Bratt, who, with his brother, actor Benjamin Bratt, was brought up by a Latino single mother — a political organizer herself.

Huerta was arguably as important as Chávez to the success of one of the great labor struggles of the 20th century. Chávez was a dynamic leader and speaker, but Huerta did the negotiating, and she was tough. She was also in many ways his opposite. Where he was shy in person and soft-spoken, and came across as pious, she is feisty, and dramatic, larger than life.

Huerta had a decidedly unconventional approach to family. She was married twice and divorced twice. Her first marriage, to Ralph Head, produced two children; her second marriage, to Ventura Huerta, five. Following her second divorce, Huerta had a long-term relationship with César Chávez’s brother, Richard. They had four children together.

A compelling thread of the film is Huerta’s long absences from the lives of her 11 children as she pursued her vision for migrant workers. In one scene, the children, some of whom barely know each other, are together for only the second time ever.

At the close of the screening I attended at the Sundance Film Festival, her children were asked to rise from various spots in the audience. Several made apparent their delayed recognition of what her mother had built, and how, like most kids, they could now see their mother in a new light — that their loss was society’s gain.

On the way to the Women's March in Park City! pic.twitter.com/Ca0wQ4sZaF

They were joined by the Bratts, by Santana and, of course, by their mother, now 86, as feisty and active as ever. Just days earlier, she had braved a snowstorm to climb the stage and speak at the local Women’s March held in Park City, Utah, following Trump’s inauguration.

Her aura as a headstrong woman in a man’s world is even more striking against the backdrop of a union that, like so many “progressive” entities, still could not get past sexism.

Dolores Huerta was marginalized while also being utilized, and after Chávez died, when she rightfully should have been made the union president, the all-male board passed her over.

Eventually she left, and in Dolores we see this dignified woman pick herself up and move on. After leaving the UFW, she founded the Dolores Huerta Foundation, whose mission calls for “Creating networks of healthy, organized communities pursuing social justice through systemic and structural transformation.” Please go here to see the organization’s wide and varied range of efforts on behalf of marginalized people.

Dolores Huerta is finally gaining some of the recognition she deserves. She has received a number of awards, including the Eugene V. Debs Foundation Outstanding American Award, the United States Presidential Eleanor Roosevelt Award for Human Rights, and the Presidential Medal of Freedom.

Huerta turns 87 on April 10. After a life of struggle, after all she has won, what must it be like for her to contemplate an America in which so much she fought for is, seemingly, being erased overnight? But Huerta is not a quitter. Nor are the thousands she trained.