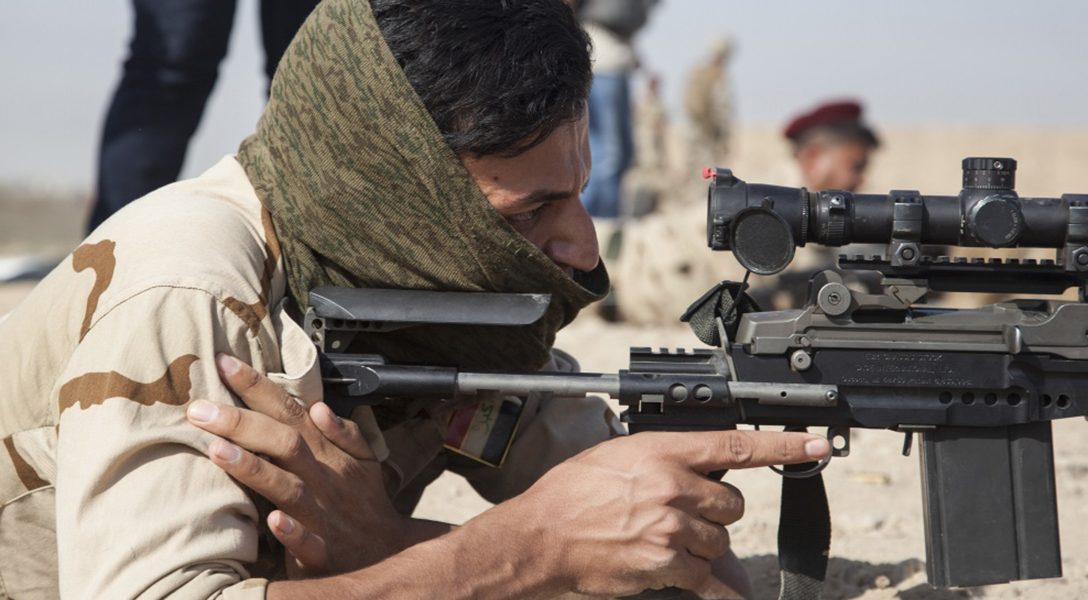 A member of the Iraqi security forces prepares to fire his rifle during marksmanship training at Camp Taji, Iraq, Sept. 28, 2017. Photo credit: DoD.

Is the Fall of Kirkuk Iran’s Answer to Trump?

In a lightning advance, Iraqi forces captured the oil-rich city of Kirkuk from Kurdish forces on Monday, sending thousands of civilians fleeing.

The fighting between two US-trained and -equipped forces that have been central to the war against the Islamic State was a slap in the face to US foreign policy.

US-supplied Iraqi tank knocks over a picture of Barzani in Kirkuk #Iraq pic.twitter.com/4g0n1qi2AU

“We are very concerned by reports of violence in Kirkuk and deplore any loss of life,” the US embassy in Baghdad said in a statement. “ISIS remains the true enemy of Iraq, and we urge all parties to remain focused on finishing the liberation of their country from this menace.”

The attack came weeks after Kurdish-controlled territories in northern Iraq voted to break off from Iraq’s central government. This infuriated Baghdad, as well as neighbors Iran and Turkey, both of which have restive Kurdish minorities. The referendum included Kirkuk, which is not officially part of the autonomous Kurdish administration, but which the Kurds captured in 2014 after Islamic State routed the government army nearby.

Some observers immediately saw the offensive as Iran’s answer to President Donald Trump’s decision last week to decertify Tehran’s compliance with the 2015 nuclear deal. This view was partially backed by reports that the Iraqi government offensive was spearheaded by Iranian-backed militias. Indeed, it seems that Iran, alongside the US, now enjoys a strong influence in Baghdad.

#Iran answer to #Trump challenge to nuclear deal is moving into #kirkuk , forcing #US hands in #Iraq

In another twist in this complex and multi-layered crisis, Turkey, which boasts NATO’s second-largest force, voiced support for the offensive and moved to close the airspace over Iraqi Kurdistan. Yet in light of centuries-long intense competition between Turkey and Iran over influence in the area, many analysts remain skeptical about how long the fragile alliance between the two regional heavyweights can last.

Ironically, the Kurdish administration in northern Iraq, led by Masoud Barzani, has served as a bulwark of sorts against the more radical anarchist groups that have spearheaded Kurdish nationalism in Turkey and Syria; prior to the September 25 referendum Barzani had been one of Ankara’s closest regional allies. Reports that, as the Iraqi Kurdish defenders of Kirkuk abandoned their positions, rival Kurdish groups from Turkey and Syria attempted to fill the vacuum in the city are almost sure to weaken Barzani and increase the influence of Turkish and Syrian Kurds over Iraqi Kurds.

Amid prevailing chaos and uncertainty on the ground, many fear that the capture of Kirkuk could easily spiral into the latest chapter of the sectarian violence that has ravaged Iraq over the past decade and a half.

“Kirkuk is like a barrel of gunpowder, and a single wooden match could change everything,” Shorsh Khalid, a Kirkuk-based journalist, told al-Monitor in a recent interview. “The people of Kirkuk from all backgrounds have firearms at home and some carry them around like prayer beads.”