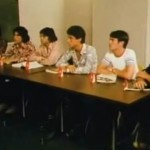 Enforced Conformity is Deadly for Democracy

Lately, from conversations and reading posts on the Web, I have been struck by how many people have developed hardened positions on the assassination of JFK based on inadequate information. Lots of people, for example, are unaware of the extraordinary number of witnesses who told stories that ran counter to the official version produced by the Warren Commission. They also don’t seem to know about the scores, perhaps hundreds of witnesses who originally told stories inconsistent with the lone assassin scenario, then recanted.

We can better understand the recantation process by watching this vintage video. It depicts a psychological test proving how people can be made to change their assertions based on subtle peer pressure: (thanks to Brasscheck TV for bringing this to my attention)