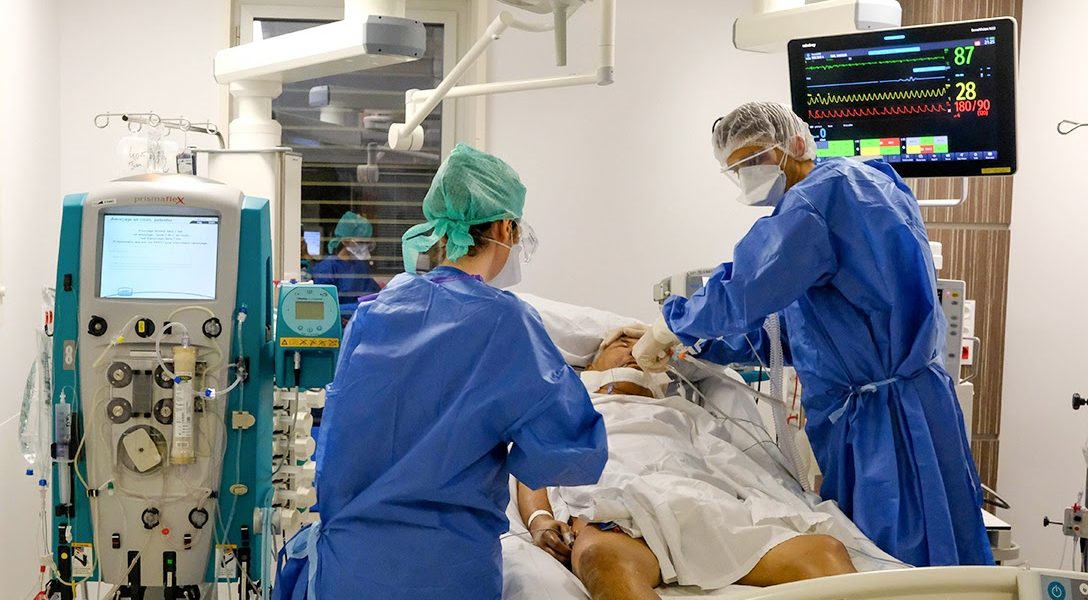 Opinion — Sarah Palin, the Republican 2008 vice-presidential candidate, whined about Obamacare “death panels” and predicted that bureaucrats would soon decide who gets lifesaving medical care and who doesn’t. Palin’s creation of the term was named by PolitiFact as its “Lie of the Year” for 2009.

Until 2020 and the coronavirus.

Until hospitals become faced with too many deathly ill patients and not enough ventilators to save them all. A situation some states are only days or weeks from entering.

Italy, we are told, has passed that stage. New York, Detroit, Louisiana, and Washington are approaching it. In anticipation, hospitals are struggling to come up with triage protocols, with guidelines to determine which patients get priority for increasingly limited medical resources.

How these literal life-and-death decisions are made, who makes them, and whether they are made consistently and on an organized basis or made one patient at a time are questions that should be answered on a national basis. Instead, whether a coronavirus patient qualifies for lifesaving care can depend on what hospital he is brought to or in which state she gets sick.

A March 23 article in the New England Journal of Medicine, “The Toughest Triage — Allocating Ventilators in a Pandemic,” warns that “of all the medical care that will have to be rationed, the most problematic will be mechanical ventilation … the number of patients needing ventilation could range between 1.4 and 31 patients per ventilator.” Complicating the decision-making is the one-way nature of ventilator use, because “when the machine is withdrawn from patients who are fully ventilator-dependent, they will usually die within minutes. Unlike decisions regarding other forms of life-sustaining treatment, the decision about initiating or terminating mechanical ventilation is often truly a life-or-death choice.”

Traditionally, medical care has been provided like deli counter service at the supermarket: first come, first served. As each patient arrives at a hospital, she is evaluated and treated as she demands to be treated. “As it stands in the US, if your family member is adamant that you would want everything done and you’re 90 years old, wearing a diaper, severely demented, you would get put on a ventilator,” said Dr. James Keany, ER physician at Providence Mission Hospital in Mission Viejo.

Until now, nobody would tell that 90-year-old that he’s lived long enough — that a younger person, a healthier person, a person with a more important job, a more deserving person, should have his machine. The coronavirus changed this traditional model. All of a sudden, in this most prosperous nation on earth, there are not enough resources to provide medical care for everybody — not even for everybody who can pay for it.

Now, medical decisions have to be made on a basis other than what is in the patient’s best interests, yet we have no consistent standard for making these decisions. Guidelines vary from state to state, in some cases from hospital to hospital. Some systems comply with civil rights laws. Some hospitals, and some states, ignore established discrimination laws. And all this is happening with little or no public scrutiny.

The most basic question is whether patient age should be a factor. Italy, which we are repeatedly told is just a few weeks ahead of the United States on the coronavirus timeline, allocates medical care, primarily ventilators, as if it is at war, saving the most “valuable” patients and letting the least valuable persons die.

“I tell myself it’s like war surgery … It’s decided by age, and health. As in all war situations,” said Christian Salaroli, an anesthesiologist at the Papa Giovanni XXIII Hospital in Bergamo.

Italian authorities confess that while they used to treat patients independent of factors such as age, gender, or religion, “now they have to choose” and that the most commonly used criterion is age. The Italian College of Anesthesia distributed COVID-19 guidelines warning that “it may be necessary to set an age limit for ventilation” because that “saves resources for those who have more years of life to be saved.”

Washington, on the cutting edge of the virus in this country, is similar to Italy in its triage decisions. “If you are above a certain age and we have a shortage of ventilators, you don’t get one,” said Cassie Sauer, CEO of the Washington State Hospital Association.

Alabama also weighs the value of the patient’s life in deciding who gets access to a ventilator. For example, patients with mental retardation or dementia are excluded from ventilators when there is a shortage. Patients with a variety of other diseases, including cancer and heart disease, also may be barred. Significantly, “age-based” survival criteria are a decision-making factor. A complex set of statewide standards, the Alabama Criteria for Mechanical Ventilator Triage Following Proclamation of Mass-Casualty Respiratory Emergency, guides hospitals in decisions concerning access to ventilators in epidemic conditions.

New York, on the other hand, rejects this kind of wartime triage method and forbids using patient age as a factor in deciding who gets care and who dies. New York’s Revised Ventilator Allocation Guidelines say that “advanced age was rejected as a triage criterion because it discriminates against the elderly.” New York’s guidelines boil down to a simple principle: “Using clinical criteria, patients deemed most likely to survive with ventilator therapy have the highest level of access to this treatment.” (Which may in practice mean that the elderly, especially those with chronic conditions like heart disease and diabetes, have less access.)

Michigan is one of the few other states to implement guidelines for allocation of medical care in times of shortage. It generally follows New York’s standard but makes an exception for special access for patients whose work involves “essential social functions,” such as healthcare workers, public safety employees, or “critical” employees in fields such as energy or telecommunications.

This ticket to skip to the head of the ventilator waiting line could incentivize people to volunteer at hospitals.

These same two laws also prohibit discrimination in the provision of medical care on the basis of disability. Alabama’s list of disqualifying disabilities for access to ventilators would seem to fall squarely in violation of these laws. Washington’s practice of refusing ventilation to older patients when there is a shortage of them is, seemingly, also illegal.

Besides these two federal anti-discrimination statutes, decades of carefully developed civil rights case law interprets when discrimination is permitted and when it is prohibited. These laws should guide triage decisions even during the present crisis.

The Office of Civil Rights in the Department of Health and Human Services published a not-at-all-subtle reminder of these laws in guidance it issued March 28. “In this time of emergency, the laudable goal of providing care quickly and efficiently must be guided by the fundamental principles of fairness, equality, and compassion that animate our civil rights laws. This is particularly true with respect to the treatment of persons with disabilities during medical emergencies as they possess the same dignity and worth as everyone else.”

These are critical differences among the states. When hospitals run short of ventilators, as we are repeatedly told is about to happen, a 70-year-old in Seattle who can only be saved by a ventilator is going to die. In New York, he is more likely to live.

Doctors don’t like being told how to make medical decisions, such as who gets a ventilator and who doesn’t. They especially don’t like being told by their mortal enemies: lawyers. But that is how our civil society works. Most significantly, these standards, these practices that vary from state to state, have been implemented pretty much outside public scrutiny. When and how was it decided that it is acceptable in the present emergency to disregard established civil rights laws?

Who Is Trump Fooling with MAGA?

Suicide Helper: The Man Who Killed His Parents

While various states are in various forms of emergency, none are under martial law to the extent that existing civil rights laws are suspended. The future of the coronavirus outbreak, when the world returns to normal, may be an epidemic of lawsuits brought by the families of elderly or disabled people who were denied ventilator care.

There is one more twist to this life-or-death issue: who makes the decision? The usual course of medical care is that a patient and his doctor consult about treatment. The doctor advises and the patient decides. That is upended in the current crisis. When ventilators run short, the patient’s only role in the decision of whether he will be ventilated is if he voluntarily rejects it, out of altruism or otherwise.

Even the patient’s doctor usually has little say in the ventilation decision. The almost universal rule is that a committee, separate from the treating physician, makes the life-or-death decision about access to ventilation. A recent New England Journal of Medicine article emphasizes the emotional difficulty of a doctor deciding to withhold potentially lifesaving care from his patient.

The angst that clinicians may experience when asked to withdraw ventilators for reasons not related to the welfare of their patients should not be underestimated — it may lead to debilitating and disabling distress for some clinicians. One strategy for avoiding this tragic outcome is to use a triage committee to buffer clinicians from this potential harm. We believe that such a committee should be composed of volunteers who are respected clinicians and leaders among their peers and the medical community.

Most hospitals take these decisions away from the treating doctor and hand them to a triage committee.

Which brings me to a set of words I never expected to reluctantly mumble:

In a March 24 Fox News “Town Hall,” while lashing out at New York Gov. Andrew Cuomo (D) for being insufficiently grateful about federal aid for New York, Trump charged that Cuomo failed to purchase sufficient ventilators in 2015 and “established death panels and lotteries instead.” (Politifact refutes this claim and rates it “false.”)

How predictable that it would be Donald Trump to revive Sarah Palin’s Lie of the Year.

But how unpredictable that, this time, death panels, otherwise known as “ventilator triage committees,” would be created at most hospitals.

Harvey A. Schwartz is a retired Boston civil rights attorney. He has argued two civil rights cases before the US Supreme Court. His novel Never Again describes a frightening scenario in which something similar to the Nazi Holocaust happens in the near future in the US. Disclosure: he is 71 years old.