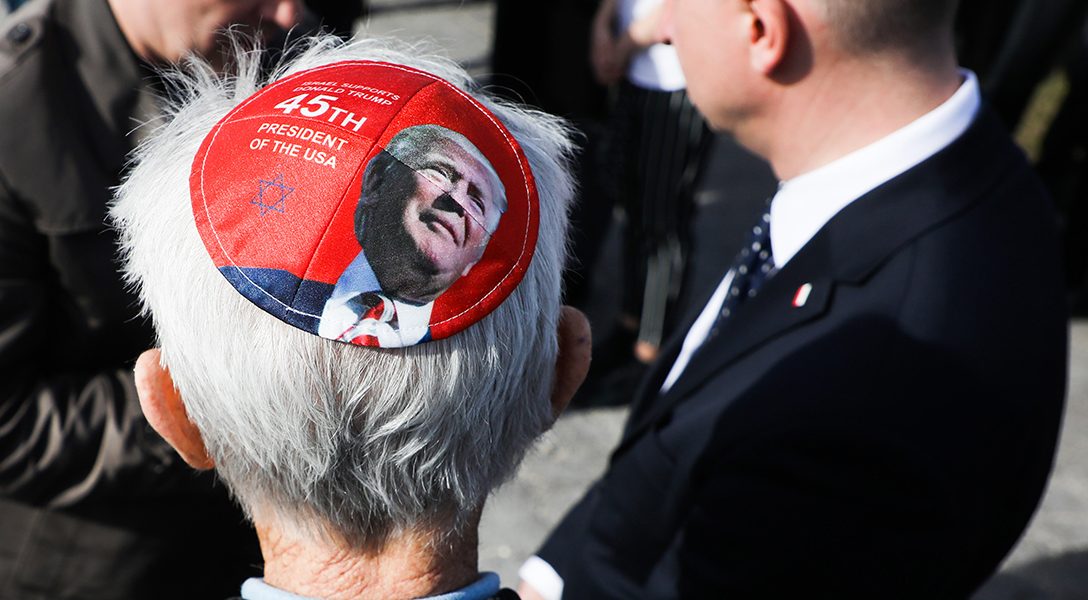 Who Is Trump Fooling with MAGA?

So who is Trump fooling with MAGA — Make America Great Again — the semites or the anti-semites? The Jews or the Jew-haters? Or both?

In March, tombstones in a Jewish cemetery in Fall River, Massachusetts were overturned and painted with “oy vey, this is MAGA country.” The tombstones were also adorned with swastikas, and the message “expel the Jew.”

A month later, GOP megadonor Sheldon Adelson rolled into a Republican Jewish Coalition rally in Las Vegas on a motorized scooter and was greeted with a standing ovation. He wore a bright red Make America Great Again hat.

Sheldon Adelson is wearing a Trump yarmulke, via @JeffScheid. pic.twitter.com/eceeFS9j8y

Amazon sells Make America Great Again yarmulkes. For $29.99. Reviewers give it 4 and a half stars. Some of the men who cheered for Adelson in Las Vegas wore them.

Jason Kessler, chief organizer of the 2017 Unite the Right rally in Charlottesville, reminded his tiki-torch-bearing followers to “bring your MAGA hats if you’ve got ‘em.” They chanted “Jews will not replace us” as they marched.

Every place setting at a gala fundraising dinner in New York for the National Council of Young Israel, an Orthodox synagogue association, included a red baseball cap declaring Build Israel Great Again. Yechezkel Moskowitz, the dinner chairman, told the crowd, “President Trump is the most benevolent leader the Jewish people have ever known in their 2,000 years in the Diaspora, believe me,” reported the Jewish Telegraph Agency.

Nikolas Cruz, who shot 17 students at Marjory Stoneman Douglas High School in Parkland, FL, posted a photo of himself wearing a red MAGA hat. He said that he wished that “all the Jews were dead.”

This can only happen in a Bizarro world. Trump trashes Rep. Ilhan Omar (D-MN) for what he falsely presents as her criticism of American Jews because of their “allegiance to a foreign country” — then turns around and tells the Republican Jewish Coalition “I stood with your prime minister at the White House.”

Of course, Benjamin Netanyahu is no more the “prime minister” of Americans of Jewish descent than Angela Merkel is Trump’s “chancellor,” even though his father was “born in Germany” or so he says.

Trump is master of none too much. But branding — branding he has down pat. After all, branding is his main business: getting paid millions for putting his name on everything from skyscrapers to steaks, from airplanes to a “university.”

MAGA — Make America Great Again — is his best brand ever. A president who stands for nothing has created a slogan that stands for whatever anybody wants it to stand for. From right- wing haters with MAGA tattoos to Jewish leaders getting standing ovations for declaring Trump “the most benevolent leader” for Jews in 2,000 years.

Yet, what does the slogan actually mean? Trump has never told us. If America is not “great” now, when was it “great?” When schools were segregated? When housewives stayed home and out of the workplace? When the low-wage migrant hordes despoiling the country were Irish, Italian, Jewish (but at least were white)?

Maybe the very vagueness of the slogan is why it can be broadcast simultaneously on racists’ tattoos and Jewish yarmulkes. The only thing it truly, undeniably stands for is Trump himself. If its meaning is unclear to Trump supporters, it nonetheless sends a definite message to Trump opponents.

I sought to prove that last point. I went on Amazon and bought my own Make America Great Again hat. For $10.99. With free Prime delivery and free return. It ranks #10,175 in Clothing, Shoes & Jewelry, proudly declaring that it is “embroidered in the United States of America.”

Sadly, you have to take delivery to learn that the hat itself was made in China.

I screwed up my courage and wore my new hat into the very heart of the beast — Ground Zero of the liberal, socialist, communist, left wing, pinko, deep state, globalist, libtard, PC cesspool. To Harvard Square, Cambridge, MA. I’ve never actually seen a red MAGA hat in Harvard Square. Or Cambridge. Or, come to think of it, in the entire Commonwealth of Massachusetts. I considered my stunt an act of personal courage.

I slipped into Harvard Square in full stealth mode, camouflaged in a Tesla. I parked between a Prius and an all-electric Chevrolet Bolt. Inconspicuous. Then I put on my canvas barn jacket and popped my MAGA hat on my head and sauntered through Harvard Square, past the coffee shops, news stands, bistros, and Communist Party headquarters buildings.

I wore sunglasses so I could see people’s’ eyes without them seeing mine. My heart was beating furiously. I’d alerted a friend, a big friend, of my plans and asked him to keep his phone handy. Just in case I ran into trouble. Trouble from what? Antifa? Feminists? Enviro-nazis? Intelligent people?

As it turned out, I did draw attention, but nothing to be especially concerned about. I’d estimate one out of three people I passed tracked me with sidelong gazes, surprised to see me, but not in an especially antagonistic way. Lots of head-shaking and twisted smiles. Like people compelled to sneak a sideways peek at somebody with an unusual facial deformity. Or maybe as startled as an expert birdwatcher spotting an Olive-sided Flycatcher far from its natural range.

A man with eyes pointing in different directions, holding a sign offering “Free Bible Discussion” gave me a smile and a subtle from-the-belt wave of his hand. A middle-aged couple flashed big smiles at me but then joined their bus group. Probably midwestern tourists recognizing a neighbor.

Only when I snuck into the center of the hive, into the coffee shop in the middle of the Harvard Coop — the 137-year-old cooperative (aka communist) bookstore dead center in the square — did somebody look me in the eye and comment. The young woman handing me my black coffee and slice of carrot cake smiled sweetly and said, “Make America free again please.”

Now that’s a slogan I can understand. And support.

Harvey Schwartz is a retired Boston civil rights lawyer. His recent novel, Never Again, depicts an America in which Jews are declared enemy combatants and detained in Guantanamo-like camps.