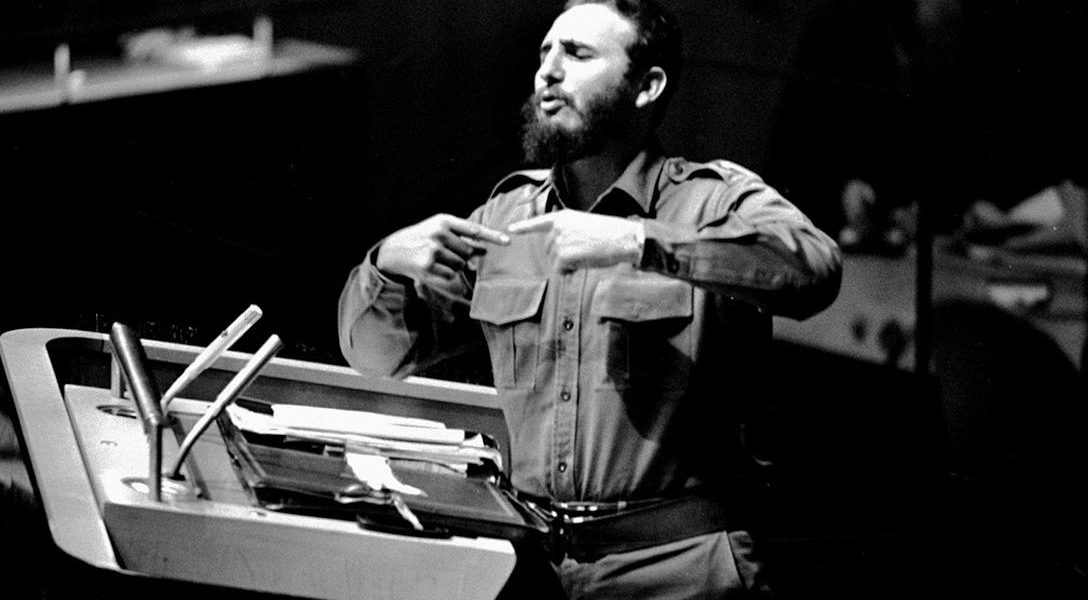 Fidel Castro during his speech at the General Assembly of the United Nations on September 26, 1960. Photo credit: Antonio Marin Segovia / Flickr (CC BY-NC-ND 2.0)

Fidel Castro is dead! While US presidents have come and gone, the “Maximum Leader” has been a constant in the lives of many Americans.

Earlier this year, when President Barack Obama travelled to Cuba, WhoWhatWhy presented exclusive excerpts of a new documentary on the history of Cuban-American relations and the embargo, which was a testament to the irrational fear the world’s most powerful country harbors against its tiny neighbor.

While most American have grown up with Castro as a villain, that wasn’t always the case. Shortly after seizing power in Cuba, he was even celebrated as a liberator in the streets of New York City.

However, the Eisenhower administration’s fears that Castro was a radical and a communist pushed him into the arms of the Soviet Union, which had treated him with respect and pledged assistance. This policy of US antagonism culminated in the Cuban missile crisis and CIA plans to kill Castro.

The small island nation quickly became a big player in the Cold War, during which Castro was not the only leader who found himself in a perilous situation not of his own making.

Even before President John F. Kennedy succeeded to the White House in 1961, plans were underway in Washington to overthrow Castro. Three months after Kennedy’s inauguration, the Bay of Pigs debacle happened under his watch.

Undeterred by the rout of a CIA-backed force of Cuban exiles, Kennedy’s military advisers and the CIA hoped the botched invasion would force the young president to go to war with Cuba. But JFK did not budge…and that decision put him on a collision course with the people behind the Bay of Pigs operation.

On many occasions, the United Nations has (nearly unanimously) sided with Castro and condemned the US embargo of Cuba. Blocking food and medicine from reaching the island is not only a violation of humanitarian law but also the action of a bully.

More than that, the embargo has proven to be completely ineffective with regard to forcing a regime change, which probably has something to do with the US being the only country that enforces it.Trying to deprive Cubans of essential goods has not forced Castro from power in over half a century — yet one administration after another has insisted on continuing this losing strategy.

The only thing the embargo has done is to cause hardship for Cubans. Many of them have tried to escape his regime — many of them succeeded but countless others lost their lives.

From the mob’s Havana ties to the Bay of Pigs and the Cuban missile crisis, from Castro and Kennedy to Nixon and Watergate all the way to Elian Gonzalez and the irony of human rights abuses committed in the US military prison improbably situated at Guantanamo Bay, Cuba, the neighbors have been locked in a tense and volatile relationship.

Earlier this year, Obama tried to take the first step to get past the contentious history of the last half century. It remains to be seen what will happen now, with Fidel Castro dead, his brother Raul in charge since 2008, and Donald Trump arriving on the scene.