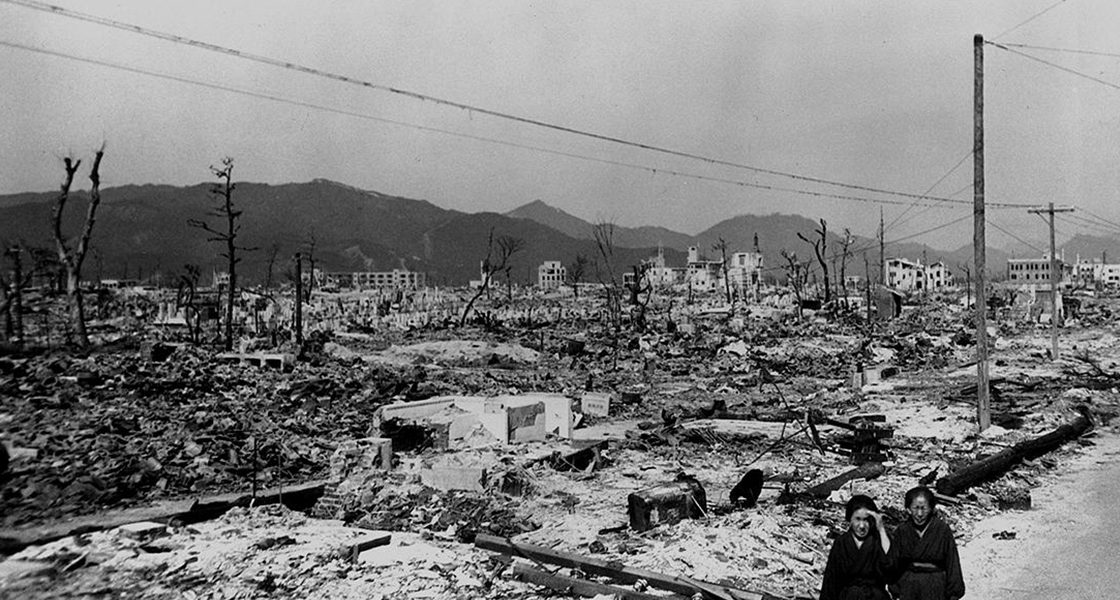 Survivors walk among the ruins of Hiroshima. Photo credit: US DOE / Wikimedia

The people of Hiroshima and (three days later) Nagasaki suffered unspeakable horrors. Some in the US government didn’t want Americans to see what really happened. Today, WhoWhatWhy revisits our past coverage of that painful final chapter of World War II, whose long shadow still haunts the world today

What follows is the second in a three-part series that first ran on March 16, 2014:

On the morning of August 6, 1945, an American B-29 dropped an atomic bomb over the center of Hiroshima, Japan, killing approximately 70,000 civilians instantly and perhaps 50,000 more in the days and months to follow, the vast majority women and children. Three days later, the US exploded another atomic bomb over Nagasaki, slightly off target, killing 40,000 immediately and dooming tens of thousands of others.

Within days, Japan had surrendered, and the US readied plans for occupying the defeated country — and documenting the first atomic catastrophe.

The American public knew little about conditions there beyond Japanese assertions that a mysterious affliction was attacking many of the survivors, claims that most Americans took to be propaganda. Newspaper photographs of victims were non-existent or censored. Life Magazine would later observe that for years “the world…knew only the physical facts of atomic destruction.”

Many were still dying horribly from the new ‘A-Bomb disease’ — that is, the effects of radiation, or burns from the original blast. Tens of thousands of American troops occupied the two cities.  Few were urged to take precautions.

The Japanese newsreel company Nippon Eigasha was already shooting film in the two stricken cities. On October 24, 1945, a US military policeman ordered a Japanese cameraman in Nagasaki to stop shooting. The U.S. General Headquarters (GHQ) confiscated his film, and the rest of the 26,000 feet of Nippon Eigasha footage. An order banned all further filming. It was at this point that Lt. Daniel McGovern took charge.

McGovern — a director and member of Hollywood’s famed First Motion Picture Unit — was one of the first Americans to arrive in Hiroshima and Nagasaki. He was with the US Strategic Bombing Survey, which was studying the effects of the air campaign against Germany and Japan. When McGovern learned of the Japanese footage, he noted in a letter to his superiors that “the conditions under which it was taken will not be duplicated, until another atomic bomb is released under combat conditions.” He proposed hiring a Japanese crew to edit and “caption” the material so it would have “scientific value.”

Later, McGovern was ordered by General Douglas MacArthur to document the results of the U.S. air campaign in more than twenty Japanese cities. His crew would shoot exclusively on Kodachrome and Technicolor, rarely used at the time, even in Hollywood.  McGovern assembled a crew of 11, including two civilians. Third in command was a young lieutenant from New York named Herbert Sussan.

After their train pulled into Nagasaki, “Nothing and no one had prepared me for the devastation I met there,” Sussan recalled. “We were the only people with adequate ability and equipment to make a record of this holocaust.”

McGovern’s crew documented the physical effects of the bomb, including ghostly shadows of vaporized civilians burned into wall. Even more chilling, dozens of hospital patients were asked to display their burns, scars, and other lingering effects for the camera as a warning to the world. A Japanese doctor at the Red Cross Hospital in Hiroshima traced the hideous red scars that covered several of the patients — then took off his shirt and displayed his own cuts and burns.

After sticking a camera on a rail car, the Americans filmed hair-raising tracking shots through the ruins that could have been lifted from a Hollywood horror movie. The chief cameraman working for the Americans was Japanese, Harry Mimura, who, in 1943, had shot Sanshiro Sugata, the first feature film by a then-unknown director named Akira Kurosawa.

Meanwhile, that May, the Japanese newsreel team was completing the editing ordered by the US  Several took the courageous step of getting the lab to secretly duplicate footage — and hiding it in a ceiling at the lab.

The Atomic Energy Commission (AEC) was also opposed, according to McGovern. It nixed a Warner Brothers feature film based on the footage, while paying another studio about $80,000 to help make four “training” films to show U.S. soldiers how such weapons might be used on the battlefield, and steps they’d need to take to prevent exposure to deadly radiation.

The color footage was shipped to the Wright-Patterson base in Ohio. McGovern went along after being told to put an I.D. number on the film “and not let anyone touch it — and that’s the way it stayed,” as he put it. After cataloguing it, he placed it into a vault in the top-secret area.

Starting in the 1950s, the Japanese government repeatedly asked the US for the full release of their own film, known to the Japanese as “maboroshi,” or the “phantom” film.

Then, in the summer of 1968, Erik Barnouw, author of landmark histories of film and broadcasting, saw a clip from a Tokyo newspaper indicating that, after high-level governmental negotiations, the US had finally shipped to Japan a copy of black and white newsreel footage shot in Hiroshima and Nagasaki. When Barnouw learned that the original nitrate film stock had been quietly turned over to the National Archives — and was by then available — he went to take a look.

And he turned what he saw into a work of art — a subtle, quiet, even poetic film, created from a carefully selected 16 of the original 160 minutes. Hiroshima-Nagasaki 1945, was a sketchy but quite moving document of the aftermath of the bombing, captured in grainy but often startling black and white images: shadows of objects or people burned into walls, ruins of schools, miles of razed landscape, with a montage of human effects clustered near the end for impact.