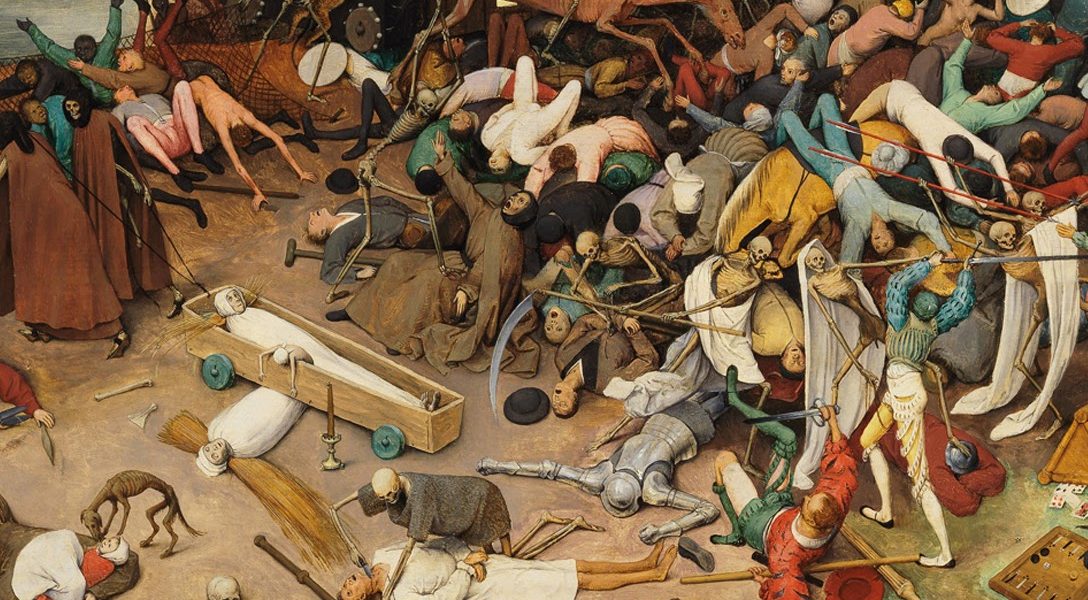 The “Triumph of Death” by Pieter Bruegel the Elder painted around 1562. This has been cropped to show more detail. Photo credit: Museo Nacional del Prado / Wikimedia
Health & Medicine

You Can Still Catch the Bubonic Plague

We don’t want to alarm you during these uncertain times, but it would not be impossible for you to catch the plague, the disease best known for wiping out much of Europe during the Dark and Middle Ages.

If this seems far-fetched, consider the following: In the US right now, the plague resides in fleas that live mostly on small mammals — squirrels, rabbits, prairie dogs, voles, marmots, feral cats — and infects humans only occasionally.

But what if climate-change-related events — such as floods, fires, and drought — lead to a mass exodus of these animals, from deep in the woods to the periphery of human habitation?

These disasters displace a lot of wildlife, sending them to more hospitable areas that are, often, nearer to humans. Go here, here, and here, and here for just a few examples. With climate change, this could happen on a larger scale.

Infected animals already live near humans. A Colorado wildlife refuge had to shut down in July 2019 because of infected prairie dogs.

In Wyoming, three outdoor cats  were infected with the plague during the second half of 2018.

And look what happened in Elmore County, ID, in 2018: In late May, a 14-year-old boy came down with the plague. No one knows where he got it, although ground squirrels near his home are the most likely suspects. They tested positive for the plague in 2015 and 2016. But just before he became ill he had been in Oregon, where, since 1990, there have been eight confirmed cases of plague in humans. In June, a pet cat became ill with it. In July, a feral cat died, after contact with ground squirrels.

Hardly an epidemic — but what if these few events were multiplied?

In the US, the Centers for Disease Control and Prevention (CDC) reports that in recent decades, an average of seven human plague cases have been reported each year. Not much at all, but these cases have been occurring mostly as a result of humans unwittingly going to the source of the disease — as opposed to the reverse.

Here is a map showing where cases of human infections have occurred: Plague Outside of the US

The vast majority of cases occur in Africa, especially Madagascar and the Democratic Republic of Congo.

In February 2018, the Emerging Infectious Disease Journal published an article about the cases of plague that had occurred during 2004-2014 in the Democratic Republic of Congo. There were 4,630 suspected cases and 349 deaths, all occurred in one province.

In 2017, there was a bad outbreak in Madagascar. From August to November 2017, there were 2,348 cases, and 202 died from it. And it’s especially worrisome that they had a higher proportion of pneumonic cases, a much more aggressive form and, worse yet, harder to diagnose (see below for more on this). Previously, multi-drug resistant strains evolved in this country. The World Health Organization (WHO) has been responding aggressively and successfully.

In China, three cases were reported in late 2019.

About the Plague Itself

It is caused by a bacterium, yersinia pestis. It lives in fleas which are not affected by the disease, but the fleas live on the blood of animals that do become infected and die — but not before passing on the disease or its fleas. There are three kinds, as described by the Mayo Clinic:

Bubonic. The most common variety. Named after the swollen lymph nodes (buboes) that typically develop in the first week after you become infected. Buboes may appear in the groin, armpit, or neck; are about the size of a chicken egg; tender and firm to the touch. Other bubonic plague signs and symptoms: fever and chills; headache; fatigue or malaise; muscle aches.

Septicemic. This is the black plague. Occurs when plague bacteria multiply in your bloodstream. Signs and symptoms include: fever and chills; extreme weakness; abdominal pain, diarrhea and vomiting; bleeding from your mouth, nose, or rectum, or under your skin; shock; blackening and death of tissue (gangrene) in your extremities, fingers, toes, nose.

Pneumonic. Affects the lungs. The least common type and most dangerous. Can be spread from person to person via cough droplets. Signs and symptoms can begin within a few hours after infection. May include cough, bloody mucus (sputum), difficulty breathing, vomiting, high fever, headache, weakness, chest pain. Progresses rapidly and may cause respiratory failure and shock within two days of infection. Needs to be treated with antibiotics within a day after signs and symptoms first appear, or is likely to be fatal.

There have been three main pandemics: Plague of Justinian, 541 AD. Killed half the population of Europe. Black Plague, 1348 AD. Wiped out millions in China and the Middle East — and one-third to one-half the population of Europe and ended the feudal system. Third Pandemic, 1855. Spread to all populated continents. Killed 10 million in India and 2 million in China. But fewer than 2,000 were infected in Europe.

How 19th Century Europe Kept Out the Plague

When the Third Pandemic was killing millions of people all over the world, Europe took creative steps to prevent history from repeating itself on its continent. From an April 2019 paper in the Proceedings of Biological Sciences

It is clear from the prevention measures enacted that the authorities were aware of the role of maritime trade in the spread of plague… in Venice in 1897, they organized quarantines, controlled maritime traffic from infected areas without stopping trade, and regulated the hygienic condition of ships, travellers, crew and goods entering Europe. It was noted by Proust* that, ‘As in the previous meeting about cholera, it was decided that the treatment applicable to ships must be regulated by their sanitary condition at the arrival and not by the state of the port of provenance which gives only indications, which may be valuable indications but which are only indications. This is the new principle underlying modern international prophylaxis’ …The recommendations of the conference to governments resulted in a complex system of regulations that controlled carriers coming by land and sea from infected regions … Despite the regulations in place, Europe experienced several outbreaks of plague during the Third Pandemic, but the vast majority of these outbreaks were small.

How Would the US Handle the Plague?

The plague has been with us since the Stone Age. The discovery of antibiotics in 1894 has kept the disease under control — so far. But if something sparked an epidemic in the US, would we be ready for it?

Would unsuspecting doctors recognize this rare disease in time? Many of its symptoms are vague and resemble those of other, less dangerous diseases.

Would we have enough antibiotics to treat it?

Would people practice preventive measures, such as “social distancing” and good hygiene?

Below is a short, very engrossing video on the colorful history of plagues, and the conditions that allowed plagues to turn cities into petri dishes: Increased international movement of goods and people, growing populations, urban crowding, poor infrastructure resulting in poor waste management and above all — ignorance, infectious ignorance.