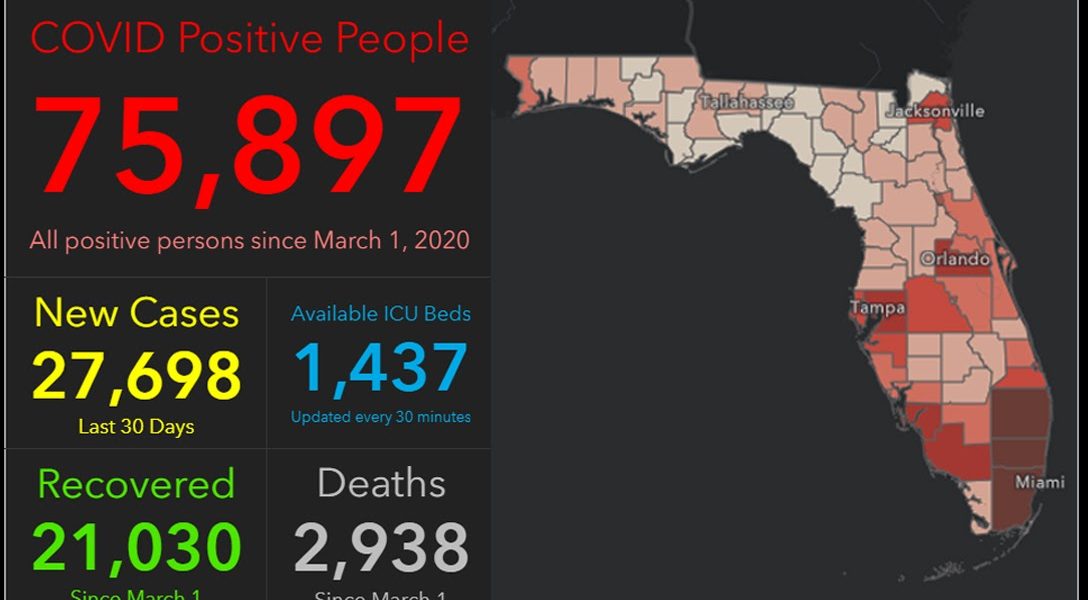 Florida has underreported infections and deaths — and overreported testing — according to data revealed on a new website on COVID-19 unveiled Thursday.

This comes at the same time that a surge of opposition has arisen about the Republican National Committee’s just-confirmed decision to hold their national convention in Jacksonville, FL, in August.

Geographic data scientist Rebekah Jones was fired from the Florida Department of Health (DOH) on May 18 — a time when Gov. Ron DeSantis (R) was pushing to reopen the state after two months of quarantine. On Thursday she announced her new site, FloridaCOVIDAction.com, the same day that the number of signatures on a petition to prevent the convention from coming to Jacksonville doubled.

“I sought to build more than a data delivery system at DOH,” Jones said. “I wanted to build a tool that … helped people looking for answers.”

Jones said the new site — which she built working around the clock for four days — uses “a community-mapping approach” in which data from community health officials is entered directly online, avoiding state bureaucracy.

Jones has been at the heart of a controversy raging for the last month in Florida, and nationally, about whether the state’s statistics are being accurately reported via the official site. Jones has publicly stated that she never claimed she was ordered to manipulate the data, but that she was fired for arguing that more information should be included, and in a more accessible and comprehensible way.

“I sought to build more than a data delivery system at DOH,” Jones said. “I wanted to build a tool that … helped people looking for answers.”

Jones said she would have Included:

The creation of a page providing public resources;

The addition of a page that showed testing centers;

The inclusion of nonresidents, deaths, and hospitalization totals;

Presentation of hospital and death data by age group and ethnicity;

State Health and Value Strategies, a program supported by the Robert Wood Foundation, reports there are calls to break down COVID-19 data into the very subcategories Jones recommended.

Jones says that visitors to FloridaCOVIDAction.com can see the most up-to-date statistics, search their county for the latest data, find information on nearby testing locations, and submit information about community resources. Her site also updates the number of active bed counts, hospital capacity, and ICU/isolation hourly, by the Agency for Health Care Administration through a public data feed; on Thursday at the time of posting, the number of available ICU beds was 1,437.

Statistics from Jones’s new site suggest significantly more people have been infected with the virus, and many fewer tested, than the state’s site reports. On Thursday, the DOH site reported 69,069 cases, whereas the Jones site reported 75,897.

“The purpose of the new and improved resource is to help the public understand this pandemic on a more detailed level, and get help quickly if they need it,” Jones said.

The new site also reported a different death toll, as it includes deaths of nonresidents who contracted the virus in Florida, but the two sites only differ by 90 fatalities: on Thursday the state listed 2,848 deaths, while the Jones site listed 2,938.

The Pandemic and the Press

Potential Impact of a Convention

Raymond M. Cusano, a politically active longtime resident of Jacksonville, said the facts revealed by the Jones website demonstrate why Floridians are worried about a huge influx of people from around the nation coming to their state. Opposition to the convention has resulted in thousands of phone calls to Mayor Lenny Curry’s office as well as nearly 15,000 signatures on a petition started by Jacksonville resident Richard Borders, a lighting-design pioneer who worked with the likes of The Who, Jimi Hendrix, The Grateful Dead, and Pink Floyd.

“The use of the city of Jacksonville for the Republican National Convention must be prevented,” the petition reads. “The damages will take years to recover from [and would] outweigh any financial benefits that the city could hope for.”

“It is a fact that this convention will bring with it the largest protests in the history of our country.”

According to Cusano, local people are worried not only about the potential spread of COVID-19, but also about potential protests, particularly considering the political climate across the nation since the killing of George Floyd in Minneapolis and the vandalism and police brutality associated with protests in many locations.

“It is a fact that this convention will bring with it the largest protests in the history of our country,” the petition states. Recent protests in Jacksonville were mostly peaceful, but did result in damage to multiple police vehicles and in 79 arrests. The petition argues, “a convention would attract protesters peaceful and violent from around the world with opposite intense political views. It is a perfect storm for destruction.”

According to Mark Woods, a Jacksonville journalist at the Florida Times-Union, one of the arguments used for bringing the convention to Jacksonville has been the low incidence of COVID-19 cases there.

The Centers for Disease Control and Prevention requests that states release statistics on “probable coronavirus cases and deaths,” but Florida is one of the states that does not.

“Whether to have the convention here isn’t a Republican or Democrat issue,” Cusano said. “It’s a health and safety issue.”