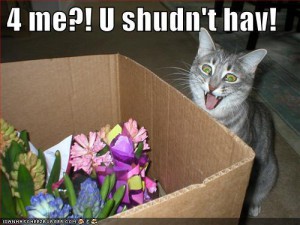 We don’t just focus on war and pestilence around here. We’re also clipping all kinds of practical items, so that you don’t have to.

Here are some bits of encouraging news (and please don’t hate us because we don’t do this every day):

Back to the Future: Great News for Back Pain Sufferers

This from the University of Manchester (that’s in England, fyi):

Chronic lower back pain is a major problem for society – behind only headaches as the most common neurological ailment – and is frequently caused by degeneration of the intervertebral disc. Researchers have worked for many years to find a way of repairing the wear and tear on the lower back.

Now, in results published in the journal Soft Matter, they have discovered how to permanently replace the workings of the invertebral disc.

It is estimated that back pain affects 80% of people at some point in their lives. In the United States it is the most common cause of job-related disability, a leading contributor to people missing work.

The University of Manchester cross-faculty team have been working with microgel particles, which are swellable nanoscopic polymer particles, for a number of years.
Previously, they have demonstrated that an injectable fluid of these particles could transform into a gel that restored the mechanical properties of damaged model intervertebral discs.

Lead researcher Dr Brian Saunders, of the School of Materials, and his team have now succeeded in linking the microgel particles together to form injectable durable, elastic gels capable of sustaining large permanent changes in shape without breaking.

These improved injectable gels have much better mechanical properties than the first generation and should now display the necessary long-term durability required for an implanted device.

In this study the researchers – who include PhD student Amir Milani and Dr Ruixue Liu – have achieved an important milestone for producing injectable gels for minimally-invasive repair of IVD degeneration.

Dr Saunders said: ““Our team has made a breakthrough through innovative materials design that brings the prospect of an injectable gel for treating degeneration of the intervertebral disc a step closer.

Professor Tony Freemont, Head of Research in the School of Biomedicine, and co-author on the paper, added:
“Degeneration of the intervertebral disc results in chronic back pain which costs the country billions of pounds per annum and causes untold misery for sufferers and their families.

“We have been working for 25 years to identify methods for treating degeneration of the intervertebral disc.”

I didn’t know there was a journal called Soft Matter, either. And if I did, I might assume it was about something else entirely.

from Consumer Reports on Health:

Women who drank at least a cup of coffee a day were about 23 percent less likely to have a stroke over 10 years compared to those who drank less, according to a study of 34,670 women. It was published online on March 10, 2011, in the journal Stroke. The study didn’t differentiate between regular and decaf.

Huh. I didn’t know there was a journal called Stroke. Now I do.

As long as we’re talking about coffee, here’s one for the guys….

TUESDAY, May 17, 2011 (HealthDay News) — Men who drink at least six or more cups of coffee a day may be cutting their risk for advanced prostate cancer by 60 percent, new research suggests.

This is the first large study looking specifically at the relationship between coffee and metastatic prostate cancer, lead researcher Kathryn Wilson said. “This is an exciting finding, because there aren’t many modifiable risk factors for prostate cancer.”

“There are a lot of compounds in coffee that have various biological effects. It’s a major source of antioxidants and that might have anti-cancer effects,” said Wilson, a research fellow in epidemiology at the Harvard School of Public Health, Boston. “Also, coffee seems to have effects on insulin and has been associated with a lower risk of type 2 diabetes. In addition, insulin is thought to play a role in many cancers, including prostate cancer.”

Compounds in coffee also have an impact on sex hormone levels, according to the study.

But right now, the findings point only to an association between a love of “java” and a healthier prostate. More study will be needed to confirm the findings and to see if a biological explanation for the phenomenon exists, Wilson said.

The bottom line, she said: “It’s probably too early to tell someone that [he or she] should go out and start drinking coffee just because of this study.”

The report was published in the May 17 online edition of the Journal of the National Cancer Institute.

Prostate cancer is the most common cancer diagnosed and the second leading cause of cancer death in men in the United States. In the U.S. it affects one in six men during their lifetime. More than 2 million Americans and 16 million men around the world are prostate cancer survivors, the researchers say.

For the study, Wilson’s team collected data on almost 48,000 men who took part in the Health Professionals Follow-Up Study and followed them until 2008. Every four years from 1986 on these men reported on how much coffee they drank.

The researchers then calculated the risk for prostate cancer tied to the amount of coffee consumed. During the period of the study, they identified 5,035 cases of prostate cancer, of which 642 were fatal cases in which the cancer was metastatic, meaning that it had spread beyond the original site.

The Harvard team found that drinking six or more cups of coffee each day was associated with an almost 20 percent lower risk of developing prostate cancer, compared to those who did not drink coffee.

In addition, the odds of developing a more lethal or advanced prostate cancer dropped by 60 percent, compared to men who abstained from coffee — a statistically significant and “substantially lower” relative risk, according to the researchers.

Even men who drank less coffee — one to three cups a day — had a 30 percent lower risk of developing lethal prostate cancer, and reductions in risk were observed whether the men drank caffeinated or decaffeinated coffee, Wilson’s group added.

After taking into account other lifestyle factors, such as age, smoking, obesity and exercise, the decline in the odds for prostate cancer remained, they said.

“This adds to the evidence from a variety of diseases that coffee doesn’t seem to be harmful,” Wilson said. “It has been shown, pretty consistently, to be associated with lower risk of Parkinson disease, type 2 diabetes and liver cancer. This is another potential plus for coffee.”

The study was limited by self-reported data and the lack of data on coffee intake from earlier periods of the men’s lives, the researchers noted.

The finding comes on the heels of a study published last week that found that women who drank five or more cups of coffee per day saw a significant drop in their risk for a particularly aggressive form of breast tumor. The Swedish study, from a team at the Karolinska Institute in Stockholm, was published in Breast Cancer Research.

Huh. More good coffee news. And I didn’t know there was a publication called Breast Cancer Research. But it certainly makes sense.

Commenting on the Harvard team’s findings, Eric Jacobs, strategic director of pharmacoepidemiology at the American Cancer Society, called it a large, well-designed study. But he stressed that, so far, it remains the only study to show such a link.

“It is premature to conclude that drinking coffee might help prevent fatal prostate cancer,” he said. “We do, however, know that both smoking and obesity are associated with higher risk of fatal prostate cancer, as well as death from many other diseases. So it is fine to enjoy a nice cup of coffee, but avoiding smoking and maintaining a healthy weight are among the surest ways to stay healthy.”

Oh—and I guess I will have a refill after all. But better make it decaf.