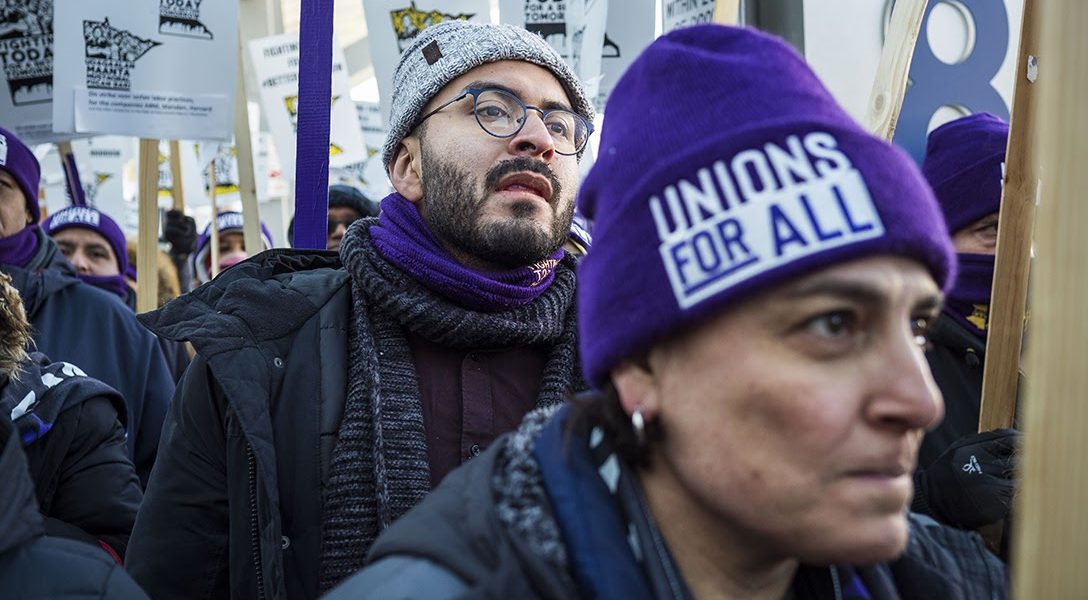 American workers in the 1950s had much to be grateful for on May 1, International Workers’ Day. Back then, one-third of all workers were unionized, and they were sharing in the nation’s prosperity.

Flash forward 60-plus years, and workers can’t be blamed for finding little to celebrate. In 2019 union members comprised a little over 10 percent of the workforce, or about 14.6 million people. This decline has translated into flat wages and eroding benefits for all workers.

Since 1979, workers have witnessed their real wages stagnate and their safety nets vanish, leaving many housing- or food-insecure. Now, in the midst of a historic pandemic, the stakes are even higher. This week, President Donald Trump issued an executive order to keep meatpacking plants open, jeopardizing not only workers’ livelihoods but their lives.

“We only wish that this administration cared as much about the lives of working people as it does about meat, pork, and poultry products.”

To date, 20 workers in these plants have died of COVID-19, and 6,500 have been infected, according to union estimates.

“We only wish that this administration cared as much about the lives of working people as it does about meat, pork, and poultry products,” said Stuart Appelbaum, president of the United Food and Commercial Workers (UFCW)–affiliated Retail, Wholesale and Department Store Union.

The Trump administration may be indifferent to the plight of American workers, but union leaders are speaking up in their defense, advocating for more protection for employees.

And that’s one of the unexpected consequences of this public health crisis: the pandemic has shined a light on the role of organized labor in both protecting workers’ rights and devising innovative solutions to counter the destructive economic impacts of the coronavirus.

When the pandemic hit, unionized workers were in a much better position to weather the storm.

As of March 2019, 95 percent of all unionized workers had access to an employer-provided health plan compared to only 68 percent of non-union workers.

And unionized workers have an additional built-in advantage.

“If there is a steward in the workplace, and they have a health and safety committee, and the stewards are educated by the union, [workers] are much more likely to know their rights,” Kate Bronfenbrenner, a senior lecturer at Cornell University’s School of Industrial and Labor Relations, told WhoWhatWhy.

Bronfenbrenner pointed out that union contracts often include language guaranteeing the right to a safe and healthy workplace. If management wants to make changes in workplace procedures that fall outside the purview of the contract, they are then required to bargain with the union in good faith.

On the flip side, non-unionized workers have little to no recourse.

“I would argue that without union representation, you can’t just go and say ‘I want to make sure that I have a new face mask every day and I want to make sure that you issue us gloves every day,’ and all the necessities required,” Immanuel Ness, professor of political science at the Brooklyn College Graduate Center for Worker Education, told WhoWhatWhy.

Bronfenbrenner outlined several ambitious initiatives unions have undertaken in the face of the COVID-19 pandemic:

In a national day of action, the Service Employees International Union (SEIU) demanded PPE for frontline health workers in addition to increased healthcare funding and an extension of paid sick leave.

Bronfenbrenner asserts that these campaigns benefited all workers, including non-unionized workers. And workers are not the only group to benefit from union interventions. Union efforts to protect workers against the spread of COVID-19 protect many others as well — including the families of workers or anyone else they may have contact with during the pandemic.

“The Transit Workers Union has worked with the Metropolitan Transportation Authority, not just in New York, but throughout the country’s various TWU locals, [to get] people riding buses to enter from the rear of the bus rather than the front of the bus so drivers are not affected,” Ness said.

And, very recently, one union has won what many see as a groundbreaking agreement.

One of the biggest wins by organized labor was by the Association of Flight Attendants (AFA). It won a provision in the recent Coronavirus Aid, Relief, and Economic Security (CARES) Act that will provide direct government grants to defray the payroll costs for aviation employees from April 1 through the end of September.

The driving force behind this settlement was that an ounce of prevention is worth a pound of cure. It would be less expensive to keep workers on the payroll until the pandemic passes than to have them file for unemployment benefits now, and then, a few months later, look for jobs that may no longer exist.

Government covering payroll expenses for private businesses is the basis of legislation proposed by Sen. Josh Hawley (R-MO). Under his bill, the federal government would cover 80 percent of workers’ median wages for every company affected by the crisis.

“When your life is on the line, employers’ threats of intimidation, coercion, don’t mean the same thing.”

This proposal, which advocates label “business-interruption compensation,” has been adopted in Denmark, the Netherlands, and the United Kingdom. If the pandemic drags on for many months, with more and more workers exhausting their savings, a strategy such as Hawley’s may gain wider support.

The AFA is not the only union that has come through for its members. In March, unions representing 34,000 workers at Verizon won generous benefits.

Those benefits include up to 26 weeks of paid sick leave at the regular rate of pay for Verizon union members diagnosed with the coronavirus. They also include up to eight weeks of paid leave at the regular hourly rate for workers with underlying conditions who have been directed by a doctor to stay home, and up to 18 additional weeks at 60 percent pay.

Many unions have cited this victory as a potential model for their own collective bargaining efforts.

Could the Pandemic Jump-Start the Union Movement?

Still the current crisis presents many challenges for organized labor.

Moreover, many workers continue to lose income, despite the efforts of their unions. With 98 percent of workers who belong to UNITE-HERE — a hotel and restaurant employee union — losing their jobs due to COVID-19, it may be hard to see how the current crisis could have any upside for labor.

Nevertheless, there are those who believe a union resurgence may be underway. Some see as promising signs increased militancy, sick-outs, and strikes by workers at Amazon warehouses, Whole Foods, Target, McDonald’s, Instacart, and other big retail chains.

The US Bureau of Labor Statistics reports that more workers went on strike in 2018 and 2019 than at any time since 1986. And now, with the coronavirus wreaking havoc on global economies and endangering lives, past intimidation tactics by management may no longer be as effective as they once were.

“When your life is on the line, employers’ threats of intimidation, coercion, don’t mean the same thing,” Bronfenbrenner said.

Others are less optimistic.

“[Does] the UFCW, does SEIU, and other potential unions that would represent these workers have the resources, in this case, to fight the Amazons and Walmarts of the world? That remains an open question,” Ness said.

Indeed, there are recent reports of increased crackdowns on union organizing. Trader Joe’s sent a letter out to all employees on March 31 opposing unionizing efforts and calling it a “distraction.”

While history shows that organizing can be successful during times of crisis, there have been failures as well. The Great Depression eventually jump-started the union movement in the 1930s. But the Great Recession of 2008 accelerated labor’s decline.

“What I’m hoping this [the pandemic] has done is to swing the pendulum back from our individualistic system … toward more of a collective consciousness, and the idea that we’re all in this together,” said Arne Kalleberg, a professor of sociology at the University of North Carolina at Chapel Hill.

The extent to which the pendulum swings back may determine whether the union movement regains its former clout, or continues to wither on the vine.