First, Admit No Harm: The Dirty Secrets of a NY Hospital

Hello, friends. Here’s the fourth installment of my new Substack newsletter. I hope you like it. You can subscribe here.

It’s hard to get sick in New York and not encounter the Mount Sinai healthcare system. One of the city’s relatively few healthcare operations, Mount Sinai has grown a lot in recent years. It’s swallowed up other, smaller institutions, and its board and executives are a who’s who of society: a Goldman Sachs executive and the CEO of Loews Corporation — a conglomerate that was a major cigarette producer and is now a major player in offshore drilling and energy pipelines. The hospital’s CEO earned $5.5 million in 2019, according to Crain’s.

What does all that flash buy the customer — that is, the patient? I have been a patient at Mount Sinai’s main hospital in Harlem, its Beth Israel Medical Center in Manhattan’s East Village, and its New York Eye and Ear Infirmary. I’ve seen the good and the bad. I have had excellent doctors and treatment but, conversely, a successful spinal surgery somehow permanently damaged my voice and caused a lasting problem with my shoulder.

I have also suffered through a nightmarish overnight stay in the recovery room of Mount Sinai’s flagship facility, where I witnessed a total lack of effort to attend to patients. The lights were bright, and the nurses chatted loudly among themselves. You couldn’t get any sleep there, and when you’ve just come out of surgery, that’s no picnic. The nurses ignored the patients as I struggled unsuccessfully to get their attention. My throat was parched; I couldn’t even get a cup of water. I wasn’t able to tell anyone about the strange problems I was already experiencing with my shoulder.

As I left the hospital in the morning, in the lobby I noticed a giant banner declaring how much Mount Sinai loves its “community.” Not long after that, Mount Sinai started soliciting me for charitable donations. (Turns out Mount Sinai has a terrible doctor-to-patient ratio in its ERs, part of “cost-cutting” measures.)

Personal anecdotes like mine aren’t of much value in characterizing a system as massive as Mount Sinai — it has dozens of locations and employs tens of thousands of healthcare professionals all over the country’s largest city — but I’ve heard plenty of horror stories from Mount Sinai staff themselves, ranging from frustrations with the institution’s imperative of profit over care to administrative and bureaucratic nightmares and problematic personnel.

And then the recent case of Ricardo Cruciani — a doctor at the Mount Sinai Beth Israel facility facing life in prison after he was convicted of sexually assaulting and raping women in his care for chronic pain — made me wonder.

Dozens of people accused the prominent neurologist of doping them up so they were helpless to resist him over a period of at least 15 years. He was convicted of 12 counts of rape, sexual abuse, sexual assault, and other crimes connected to six victims he cultivated around 2012. He faces life in prison.

The news on Cruciani reminded me of another prominent, widely respected doctor — also at Mount Sinai — who was convicted on similar charges. For some reason, I just happened to run across that earlier case, but discovered it was not very well known in New York. That other doctor, like Cruciani, used strong drugs to maintain control over vulnerable women and to immobilize them for assaults.

Not that you would have immediately known that there was precedent, were you arriving at the Cruciani story cold. Indeed, because both Cruciani and the other doctor worked for such a dominant force in New York medicine, I was surprised to see that the New York Times article on Cruciani made no mention of the other case.

In fact, when I couldn’t recall the other doctor’s name, I tried searching online and found it challenging to locate anything. What I did find, after a spell, was his name — David H. Newman — and that, since he took a plea deal and admitted to abusing four women, he had been released from prison after less than two years. 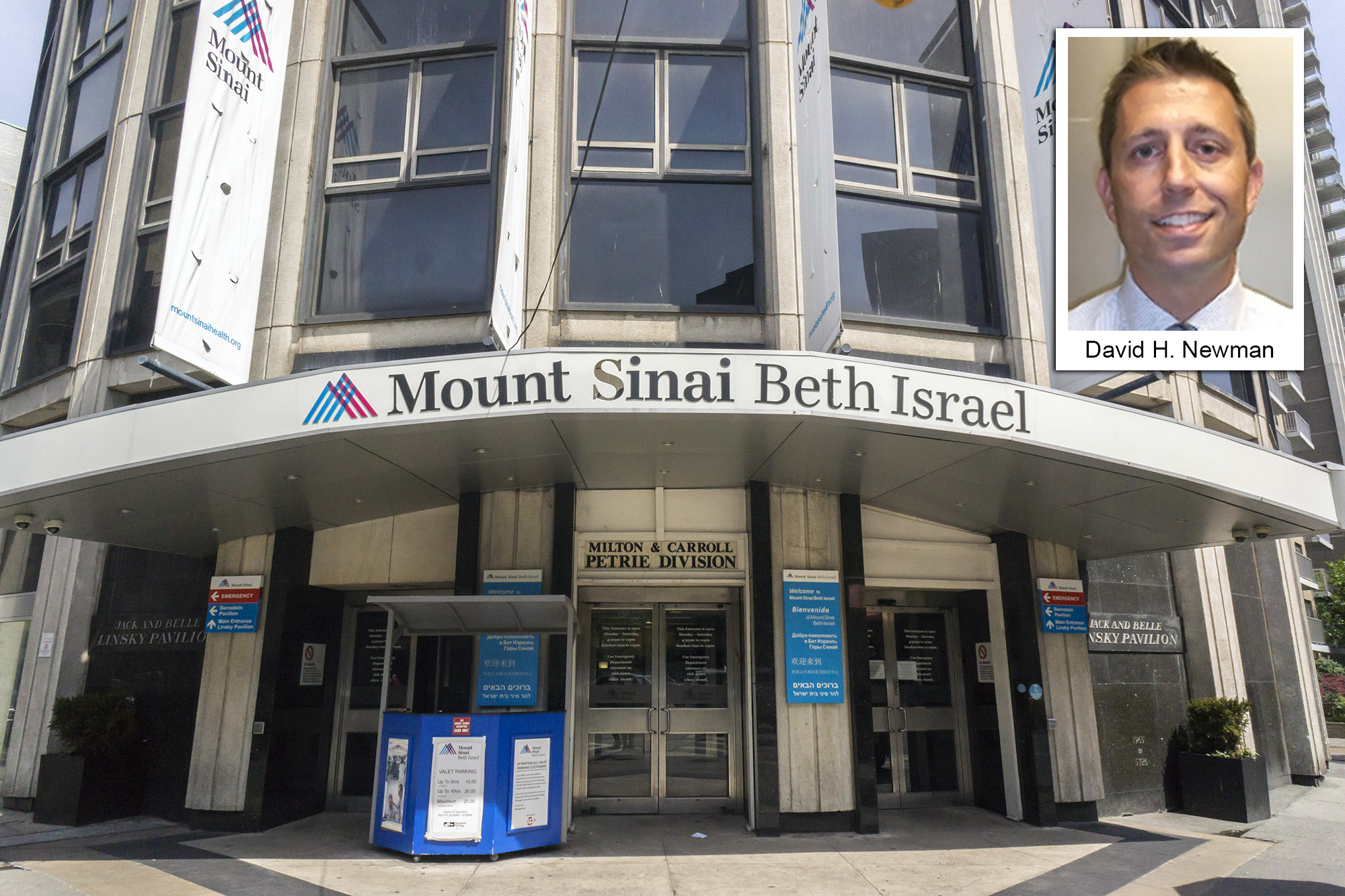 I tried to understand how Newman could get such a light sentence — the judge accepted his apology; his victims claimed the trial was more a show than a serious attempt at meting out justice — and then I remembered that all of Newman’s victims were women of color.

Dr. Newman pushed heavy furniture up against the exam door, so no one else could enter, and, when she put up a show of resistance, called her “a bitch.”

After Dr. Newman’s conviction and revocation of his medical license, Aja Newman went after Mount Sinai for letting it happen. In a civil suit, she alleged the hospital failed to investigate a prior allegation against the disgraced doctor. The hospital closed ranks and tried to use every trick in the book to fight her off, including claiming HIPAA protections.

Mount Sinai has other problems. It’s being sued by eight current and former employees in a class action suit that alleges sex, age, and race discrimination — and calls out leadership by name for failing to address the problem when confronted, according to a press release from the plaintiffs’ firm:

Since filing the lawsuit in 2019, the eight employees have received no apology or redress from Mount Sinai Health System. But they have been contacted by scores of women from across Mount Sinai and other New York hospitals reporting similar experiences of discrimination, mistreatment and abuse in their workplaces.

A judge earlier this year ruled the suit could proceed.

Still wondering why the Times didn’t remember Newman or think to bring him up to remind readers of the other Mount Sinai case, I looked up the paper’s previous articles.

When he was arrested, the Times wrote this:

Online biographies describe Dr. Newman as the director of clinical research in the department of emergency medicine at the hospital’s medical school, and say that he worked in a combat support hospital in Baghdad as a major in the United States Army Reserve.

When he was convicted, though, Times readers learned a bit more about him:

Dr. Newman rose to prominence in the medical field as an advocate for emergency care reform. He has written about the relationships between doctors and patients and other issues he confronted while working in hospitals, including in essays that were published in The New York Times.

The Times linked to only one of those essays, where his bio said, “David H. Newman is the director of clinical research in the department of emergency medicine at Mount Sinai School of Medicine.”

But there was also this Newman essay, published a few years earlier, arguing for evidence-based medicine. It doesn’t mention Mount Sinai but describes Dr. Newman as the author of a book that had come out the year before. It had a fitting title: Hippocrates’ Shadow: Secrets From the House of Medicine.”

Secrecy at an institution like Mount Sinai serves no purpose other than self-protection, the impetus that seems to be driving the hospital’s reaction to Aja Newman’s push for accountability. Of course, the hospital is free to defend itself; although yet another doctor committing similar crimes under its friendly banner makes one wonder what else the hospital is trying to hide.

And while I am no doctor, I know that there is no allowance in the famed doctors’ oath for covering up the doing of harm.

In this way, Mount Sinai — and the Times, which platformed Newman until one of his victims finally spoke up, and then appears to have inadvertently or deliberately steered attention away from its erstwhile contributor — are behaving like typical institutions.

All too often, the institutions that impact so much of our lives are focused on self-interest — and a kind of class interest — in burnishing the luster of card-carrying members of the establishment. They are too slow to fix serious problems that arise, and, in the case of both medical institutions and news organizations, there is little direct pressure to make the systemic changes they need to make.

Recognition of this problem is what made me fed up and determined to do my part. That’s why I started WhoWhatWhy. I hope you’ll follow and support our work. And if you have any information on related matters, I’d be glad to hear from you.