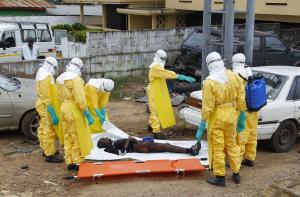 Ebola, We Hardly Knew You: 3 Lessons from the Hysteria Ebola slipped from interrupting regular programming status almost as fast as it surfaced in a frenzy of hysterical reporting about Americans who might die from it.

Yet the largest outbreak in history isn’t off the radar in its West African epicenter, where it has killed nearly 7,000 people. Sierra Leone’s government canceled Christmas, elections are steaming ahead in Liberia despite the disease and the World Bank is predicting that the economic cost could rise to as much as $32.6 billion.

But just like those stories about missing or downed Malaysian jets, the American media has moved on.

So now that all of the American patients are cured, it’s worth finding out if any lessons were learned from what’s still a major global health crisis, and whether the U.S. response has left the country vulnerable.

Perhaps we can call this next phase Ebola 2.0, or how the world puts itself at greater risk by learning to live with a disease that kills 70 percent of those it afflicts.

Lesson 1:  Ebola Was All But Ignored Until It Directly Threatened U.S. Interests

Why has it taken so long to find a cure or vaccine for ebola, since it’s been around for 40 years? “Because Ebola has historically been confined to poor African nations,” World Health Organization Director Margaret Chan said on Sept. 16.

That’s certainly the case with the three worst-affected countries: Sierra Leone, Guinea and Liberia, which don’t amount to much economically in the context of wider Africa.

It was only after ebola surfaced in the Nigerian city of Port Harcourt, the oil hub of Africa’s biggest hydrocarbon producer, in late August that the United States began to take real notice. “If that (Port Harcourt) outbreak flares up again, it could dampen the economic outlook worldwide,” Chan said. Why? To start with, the U.S. buys $11.7 billion of petroleum a year from Nigeria, and ExxonMobil, Chevron and others operate wells there.

On Sept. 16, the White House announced that the U.S. response was now a “top national security priority.” Although the U.S. was involved on a smaller scale, President Obama upped the ante by ordering 3,000 soldiers deployed to West Africa.

Here’s where the chronology gets interesting: the public hysteria over ebola in the U.S. came at the end of September. That’s when Liberian Thomas Eric Duncan became the first patient in the U.S. diagnosed with ebola in this outbreak.

Lesson 2. Little Will Change Until Big Money Gets Behind an Ebola Push, Like It Did With AIDS.

If that infection in Nigerian oil country is what helped spur a wider U.S. response, then history shows us that ebola still has a way to go before it merits a full-scale solution.

In 2000, the global threat from HIV/AIDS was sufficient to prompt the National Intelligence Council to declare it a danger to regions where the U.S. had “significant interests.”

Mining companies in Africa were among the first to understand that without a solution, their business could face major disruption from the disease and its sociopolitical effects, according to Dr. Glenn Fennelly. Now the chair of the pediatrics department at Rutgers University, Fennelly worked in Ethiopia and Vietnam as part of President George W. Bush’s President’s Emergency Plan For AIDS Relief.

PEPFAR, as the program is known, was considered a successful initiative, in spite of some substantial criticism. It drew controversy for its use of “faith-based organizations,” a requirement that a third of funding go toward promoting sexual abstinence and the naming of a former CEO of drugmaker Eli Lilly as its first global coordinator.

In fact, big money got behind PEPFAR in a series of public-private partnerships. Giant corporations like General Mills, Anglo American Mining and Sir Richard Branson’s Virgin and others sponsored it. The program is “a good model for how we can deal with the current Ebola crisis,” Fennelly said.

So far, corporate America has had little to do with ebola. ExxonMobil, which has begun operations in Liberia, donated $150,000 to ease the crisis.

Lesson 3: Lessons of the Past Were Ignored

Ebola, of course, isn’t the first deadly disease outbreak the United States has tackled. It appears, though, that earlier experiences haven’t informed the latest effort.

The underwhelming response “seems to reflect an unwillingness to grapple with the future repercussions for the United States,” said Dr. Meryl Nass, an internist who did groundbreaking research on the use of anthrax as a biological weapon during Zimbabwe’s civil war.

Yet $60 billion has been spent to protect against infectious diseases outbreaks since the 2001 anthrax scare. The government’s preparedness for such a threat appears to be no better organized now. The U.S. is in “the very early stages of figuring out how to care for (ebola). We do not even have reliable disinfection guidelines yet,” she said.

Paradoxically, money played an enormous role in stopping the latest U.S. outbreak. President Obama got $5.2 billion from Congress to that end, part of which is for setting up a network of hospitals that can handle ebola. That’s no easy feat, Nass said. One patient takes up an entire intensive care unit, a single lab must be dedicated to ebola and the daily cost per patient runs as high as $50,000. That’s “not sustainable if you get beyond just a few cases,” she says.

So the United States, more than 13 years after its last big infectious disease panic, appears to be no closer to a comprehensive solution. Ignoring ebola now that it’s out of the headlines just won’t work, Fennelly with Rutgers said. “If a virus like ebola exists anywhere, we are at risk everywhere.”