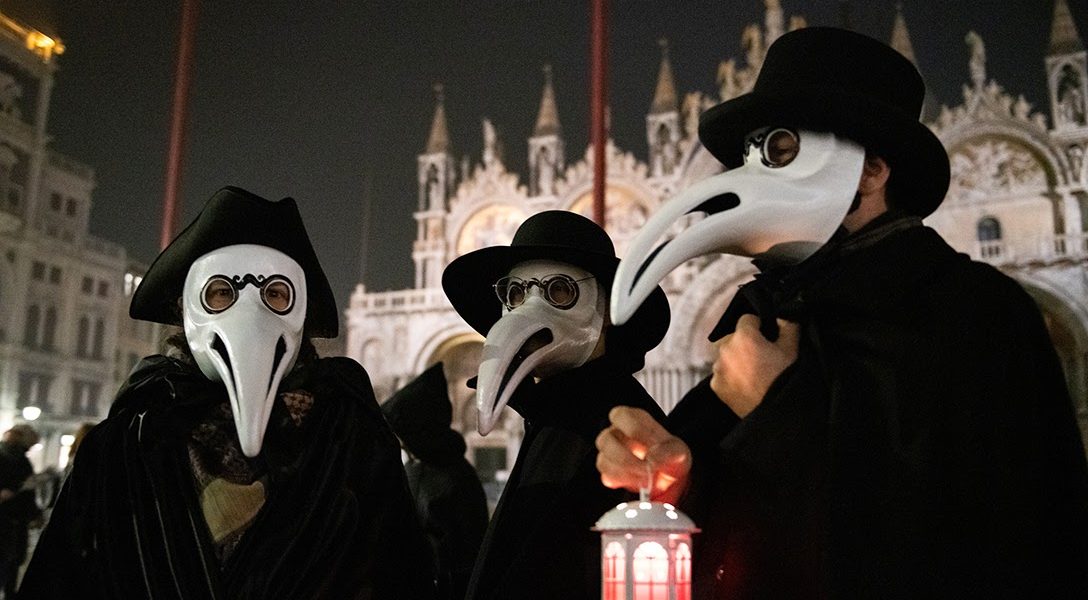 A group of Venetians dressed up like doctors in Venice during the plague celebrate the end of the February 2020 Venice Carnival. Photo credit: © Giacomo Cosua/NurPhoto via ZUMA Press
Health & Medicine

In Codogno even the Holy Spirit has been affected by the coronavirus quarantine. Churches have bolted their doors and Sunday mass has been cancelled in this small northern Italian town.

The other religion of Italy — soccer — has also been abandoned. Trains travelling to and from Milan hurtle through Codogno’s deserted station without stopping, and armed carabinieri officers guard roads in and out of the town, which is under curfew. Thus, its 15,000 souls have been sealed off from the rest of the world, trapped in the Pale of coronavirus.

One of them is “Sophia’’ (her name has been changed, as many living in the region’s affected towns fear they will be shunned,) a 30-something Italian woman, who is currently under self-quarantine in Codogno. WhoWhatWhy spoke to her part way through her expected two-week confinement. Fortunately, she has enough food and water not to worry about re-upping her supplies at the local supermarkets that have been stripped bare by panic buying.

“Most stores in the countryside and probably in and around Milan have been emptied in the past few days,” said Sophia, “because hundreds — if not thousands — of people have been buying large quantities of food and water, sanitizer gel and toilet paper, fearing that supplies would not reach their areas.”

Codogno has been dubbed the “Wuhan of Italy” after the Chinese city where the coronavirus pandemic began. It is the hot spot where the virus first surfaced in Italy after a local man in his late 30s — “patient zero” — became critically ill with COVID-19, the disease caused by the coronavirus.

Italy now has the highest number of COVID-19 cases outside of Asia. So far, more than 650 cases have been confirmed, according to the latest reports, and at least 17 people have died — all of them elderly and suffering from other conditions. A week ago, there were only three known cases, such is coronavirus’s frightening infection rate.

Codogno and the surrounding towns of Lombardy, known locally as the “red zone”, are at the epicenter of Europe’s coronavirus web ensnaring the continent. It has already spread to the very southwestern edge of Europe. A doctor from Lombardy tested positive at a hotel on Tenerife, in Spain’s Canary Islands, forcing the authorities to lock down hundreds of European holidaymakers.

Austria, Croatia, Greece, Northern Ireland, The Netherlands. and Switzerland all reported that their cases involved people who had been to Italy, as did Algeria, Nigeria, and Israel. In fact, Brazil’s first known case this week was a 61-year-old man who had travelled to Sao Paulo from Lombardy.

Codogno itself is eerily silent, a ghost town emptied of people. Its citizens are just figures in the windows of barricaded homes and apartments. They pass the time checking their temperatures and their phones, waiting and hoping for the virus storm to pass over their community where nothing much ever happened — until now.

Sophia fatefully moved to Codogno, with her partner and her dog, in January. When word began to spread that coronavirus had arrived in the quiet backwater, she made the decision to self-quarantine, horrified by the thought that, if she were ill, she could pass on the virus and that could mean deaths on her hands.

“I am not from Codogno, but I have been living here for the past month or so. It is very small and misty. There is not much to do,” she told WhoWhatWhy. “It’s a pleasant little town on the outskirts of Milan; it was quite unknown before the outbreak. People are kind here and lead a tranquil life. Nothing much happens here, so it is rather absurd that now everybody is talking about it.”

Having spent several days in self-quarantine, she remains stoic despite the surrealism of suddenly being caught up in a major global health crisis.

“It was strange at the beginning. The first few days my eyes were glued to the television and live blogs about the virus. Now I am trying to distract myself with content that’s not related to the virus,” she said. “Sometimes I think ‘I want to go to this place to get this’ and then I realize I cannot go out. However, I am working from home so that helps and time goes by quite quickly.

“I feel OK honestly, I think it’s the best thing to do for people who could actually die if they caught this virus.” Meanwhile, she has exhibited no symptoms of the virus — coughing, fever, and breathing difficulties — and she has been reassured by her doctor that the chances of her being infected are “slim.”

Life in the coronavirus parallel universe finds its own rhythm. Sophia explained: “My house is quite big and my dog is keeping me company. I work, I watch movies, and try to keep fit by exercising at home. I am not experiencing cabin fever!”

‘We Need to Stop the Panic’

From her front window she looks out on what could be a scene from a Hollywood disaster movie. All social activity has ceased and all communal buildings are shuttered. But people need to understand these measures do not represent chaos, she said, or a society in breakdown, but that the government is taking appropriate measures to defeat the epidemic.

“People have been panicking, mostly because the media are terrorizing citizens with apocalypse-like headlines,” Sophia said. “Most people don’t seem to understand that the virus is highly contagious but not deadly, unless people are already ill or have a weak immune system.”

“It’s time to turn down the tone, we need to stop the panic,” he said, according to Italian newspaper La Repubblica. The paper added that he had asked the chief executive of public broadcaster Rai to dial down its reporting of the virus.

Sophia said people need to start listening to the proper medical advice, not fake news. The face masks and gloves now being sold at gouge prices are virtually useless in preventing contagion: “Doctors have explained that face masks should be worn only by those who are already ill or those who are looking after someone who is ill, and gloves must be changed frequently, otherwise wearing them is counterproductive.”

Conte also endeavored to calm the confusion and hysteria. “Panic is a completely unjustified reaction that compromises the overall efficiency of the system and triggers regrettable speculations on the prices of some products,” he told the Corriere della Sera newspaper. “The food supply will be ensured with appropriate measures, especially in the ‘cluster’ areas,” he promised.

In the 21st century the isolation of quarantine is softened by access to the internet and social media; the world is just a click away. But interestingly, Sophia discovered that speaking to friends and family on the “outside” was not the comfort one might imagine it to be: “Part of me feels judged, even though I know that’s not the case. People have their opinions and feel entitled to tell me, constantly, what I should do/should not do. Given that I am locked in and I might have caught a virus, that can be overwhelming.”